How Can JPEG Be Used to Realize a Transfer Application with a Fixed Bit Rate? [closed]

For simplicity, assume a fixed bandwidth (5MB/s) and that each second an image with 12MP is generated. The quality of the image should be as high as possible (in terms of PSNR). Which compression rate is necessary and how would the task differ or become simplified when using JPEG 2000 instead?

When the image is a colored image with 24bpp, then the size of a 12MP image would be 12*10^6*24/8 Byte = 36 MB. That divided by 5MB yields a compression rate of approximately 7. Then transferring works as desired. However, I don't see how the task changes when using JPEG 2000.

You calculated the needed compression ratio correctly.
Now to answer the rest of the question:

To understand the Quality in JPEG, have a look at How JPG Works by Colt McAnlis: 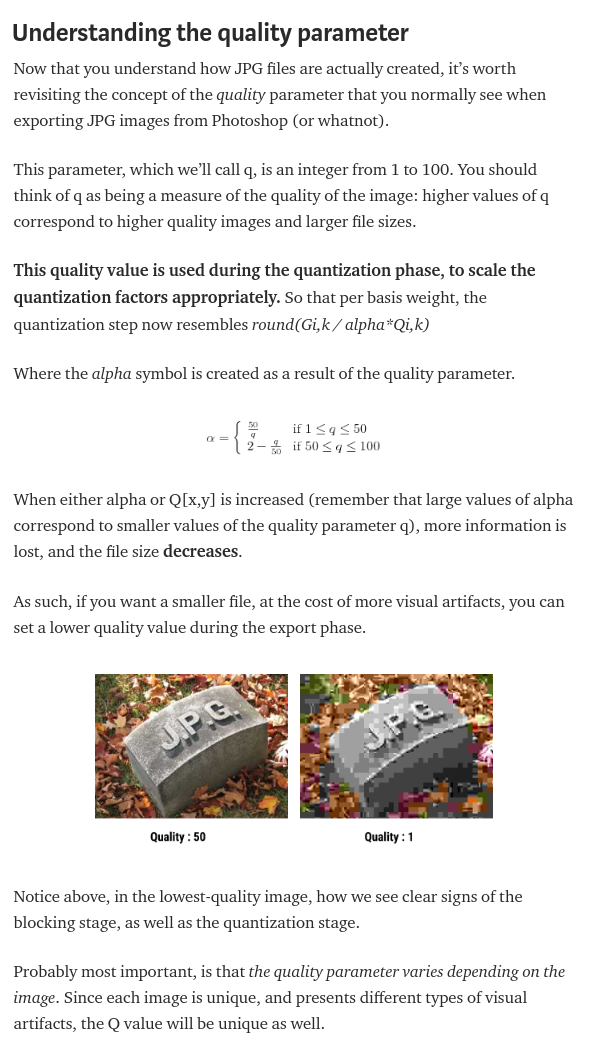 Pay attention to the line:

Probably most important, is that the quality parameter varies depending on the image. Since each image is unique, and presents different types of visual artifacts, the Q value will be unique as well.

A. Skodras, C. Christopoulos and T. Ebrahimi, "The JPEG 2000 still image compression standard," in IEEE Signal Processing Magazine, vol. 18, no. 5, pp. 36-58, Sep 2001. doi: 10.1109/79.952804 Abstract: One of the aims of the standardization committee has been the development of Part I, which could be used on a royalty- and fee-free basis. This is important for the standard to become widely accepted. The standardization process, which is coordinated by the JTCI/SC29/WG1 of the ISO/IEC has already produced the international standard (IS) for Part I. In this article the structure of Part I of the JPFG 2000 standard is presented and performance comparisons with established standards are reported. This article is intended to serve as a tutorial for the JPEG 2000 standard. The main application areas and their requirements are given. The architecture of the standard follows with the description of the tiling, multicomponent transformations, wavelet transforms, quantization and entropy coding. Some of the most significant features of the standard are presented, such as region-of-interest coding, scalability, visual weighting, error resilience and file format aspects. Finally, some comparative results are reported and the future parts of the standard are discussed keywords: {ISO standards;code standards;data compression;entropy codes;image coding;quantisation (signal);reviews;standardisation;telecommunication standards;transform coding;wavelet transforms;ISO/IEC;JPEG 2000 still image compression standard;Part I standard;entropy coding;error resilience;file format;image tiling;international standard;multicomponent transformations;performance comparisons;quantization;region-of-interest coding;scalability;standardization committee;visual weighting;wavelet transforms;Entropy coding;IEC standards;ISO standards;Image coding;Quantization;Resilience;Scalability;Standardization;Transform coding;Wavelet transforms}, URL: http://ieeexplore.ieee.org/stamp/stamp.jsp?tp=&arnumber=952804&isnumber=20598

There are other JPEG2000 papers in this SP magazine edition.

It is in some ways a transport layer as much as a file standard. It is designed to support many display resolutions over a network. Another network feature is that is builds an image as it is received over a network. If the transport terminates, some of the image is registered at the destination. One doesn't need a complete file to display an image.

The Region of Interest is treated as an elevated bit plane that is transmitted first. You have the option of lossy or lossless compression.

Not the answer you're looking for? Browse other questions tagged image-processing compression image-compression jpeg or ask your own question.

8
How can I detect buttons in a GUI of an app with pattern detection using python?
2
In image compression using transforms, how to deal with the transformed coefficients as they are not integers?
1
Critically Sampled Laplacian Pyramid from 2nd Generation Wavelet
0
How can we combine 2D image with 3D image for the same sense?
1
What base image size to choose to assist easier downsizing?