My question is about baseband OFDM. I try to plot the BER according to the SNR. I noticed that changing cyclic prefix length does not affect the performances. I.e., following the code below, gi = n_sp/1024 or n_sp/4 or even 0, gives the same performance (always the same BER curve). Is there a mistake somewhere?

NB: At the receiver I use ZF-equalizer. The full Matlab code is: 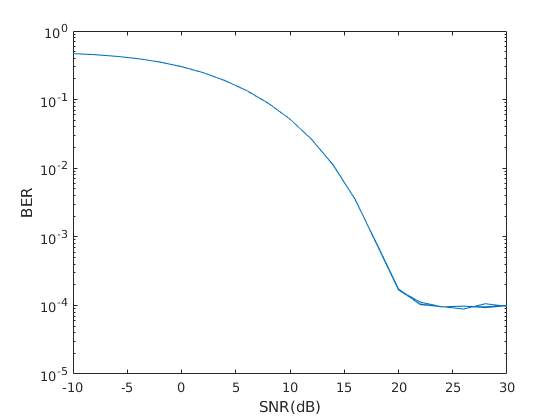 Additional question: why BER saturates for SNR above 22dB? There is no saturation for QAM modulation, is it specific to the DQPSK?

The channel which you have created is having 4-Taps and all taps are one after the other, meaning roughly there are 4 multi-paths and they are very close to each other. How close depends on what is the Sub-Carrier Spacing you would have assumed. Anyway, the point is only 3 samples of Cyclic Prefix would be enough and even with 0 or 2 samples of CP will not cause any noticeable degradation. The degradation is mostly due to AWGN which you are adding.

If you want to see the impact of 4-Tap channel, then I will suggest you to have larger delays multiplied to the magnitude of the four taps. One way to do it is as follows:

With your current h assignment, all you will have is intra-symbol interference which can be delt with no CP since the channel is just 4-taps with no delays in between.

Also, consider removing AWGN and varying the amount of zeros I have added in between 4-Taps of h, to actually notice the impact of multipath inter-symbol interference and advantage of 512 length CP over 0/2 length CP.

In the OFDM I studied, DVB-T, the cyclic prefix is not used to calculate BER, just to sync.

1.- Have a look at the following article:

In Figure 1, the header packets are used to synchronise, the data packets come after that.

In page 3/6 of the previous reference one reads:

Assuming signal detection and AGC is completed at the receiver, time synchronization algorithm finds the start point of each SYNC signal

then error measurements can start.

the header of table A.1 reads

Required C/N for non-hierarchical transmission to achieve a BER = 2 x 10-4 after the Viterbi decoder ..

The Viterbi decoder doesn't feed on the raw base-band signal, bun only on data.

3.- Actually, when I did BER measurements on microwave links, on plugs on tester on one side of the link, then you have to go to the other side, and connect the paired tester. Leave it for, a reasonable amount of time for the testers result to be accepted by the next contractor or the same network operator to validate the measurements.

The testers input and output data that doesn't mix with the prefix packets, that even vary in length, that then wouldn't be useful for BER measurements because one has to input a known sequence on one side of the link, and the look for exactly same test sequence on the other side. It's complicated if the length test sequence is going to depend upon the distance between Rx Tx antennas, or weather, whatsoever.

Not the answer you're looking for? Browse other questions tagged matlab digital-communications modulation ofdm fading-channel or ask your own question.