What techniques are available for correcting constellation rotation due to phase ambiguity?

In order for a receiver to recover a baseband signal, it needs a carrier signal equivalent to that used by the transmitter for upconverting the original baseband signal. Unless pilot tones are used, a receiver doesn't have the original carrier available and has to extract it from the signal itself, with a technique such as a phase locked loop.

However, the phase of the carrier signal to be recovered is often ambiguous to the receiver: Unless there is some asymmetry in the transmission (rotationally asymmetric constellation, non-uniform distribution of symbols), the recovered carrier may end up at one of several phase offsets.

A typical 4-way symmetric constellation like QPSK causes a phase offset of nπ/2 radians where n may be 0, 1, 2 or 3. This phase offset then rotates the received symbols around the origin in one of four different ways: 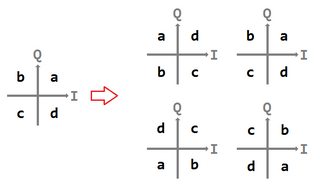 What techniques are available for decoding the symbols regardless of this rotation? I can think of seven, but all have drawbacks:

While some of these approaches are less practical than others, none are completely satisfactory. How is this issue typically handled? Can the channel coding be designed to be rotation-agnostic without sacrificing bitrate?

digital-communications continuous-signals qpsk quadrature constellation-diagram
Share
Improve this question
edited May 29 '18 at 9:12
jms
asked May 23 '18 at 15:16

In my experience from the space industry, both near-earth and deep-space communication system resolve phase ambiguity by means either unique word detection or different flavors of differential encoding. In unique word detection technique, an "Attached Sync Marker (ASM)"(a.k.a a unique word), a preamble of some sort (usually the hex pattern 0x1ACFFC1D) is attached at the beginning of every frame (known as channel access data unit (CADU)). Now, the receiver rotates the received symbols until the ASM is detected. The diagram below from CCSDS Radio Frequency and Modulation Systems--Part 1: Earth Stations and Spacecraft, page 2.4.11 gives a summary of scenarios for (offset) QPSK where the techniques are more appropriate. 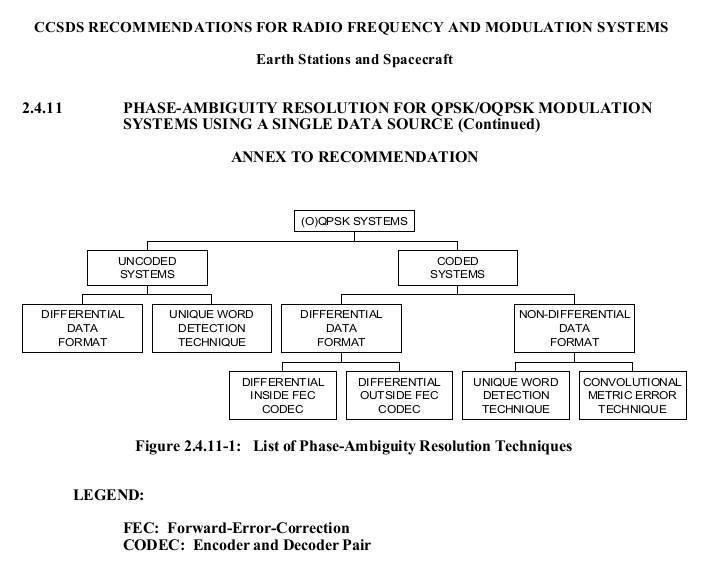 Not the answer you're looking for? Browse other questions tagged digital-communications continuous-signals qpsk quadrature constellation-diagram or ask your own question.

2
I/Q Sampling and Demodulation
0
OFDM symbol acquisition block in GNU Radio gives rotating constellation even if there is no carrier offset. How is this possible?
8
QAM constellation slicer with unknown carrier phase
0
Blind Carrier Synchronization
1
Offset in Carrier and Timing