Detect the beginning of an increasing signal

After denoising and cleaning, I get amplitude signals like this (y-axis: dB): 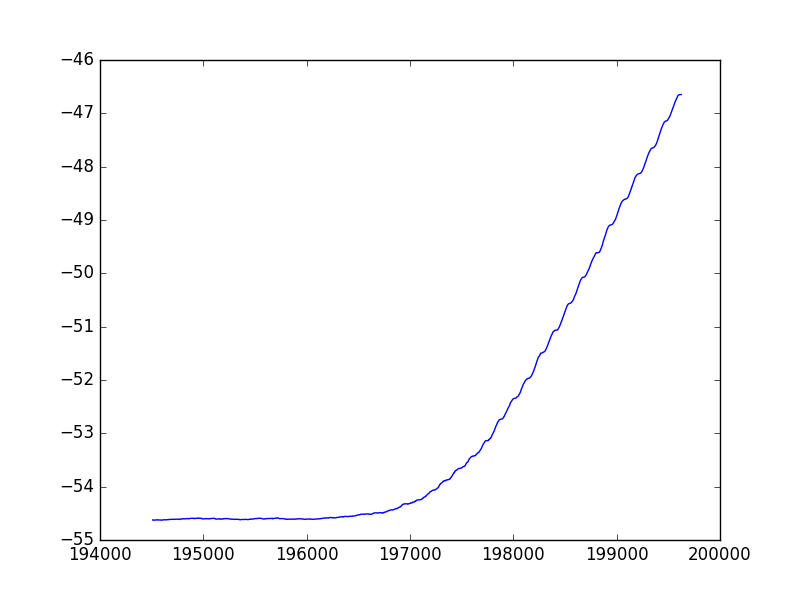 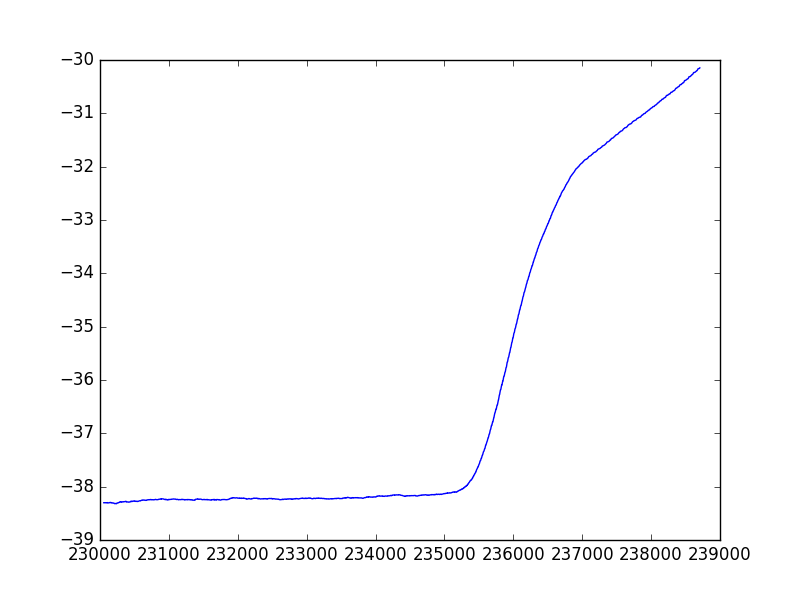 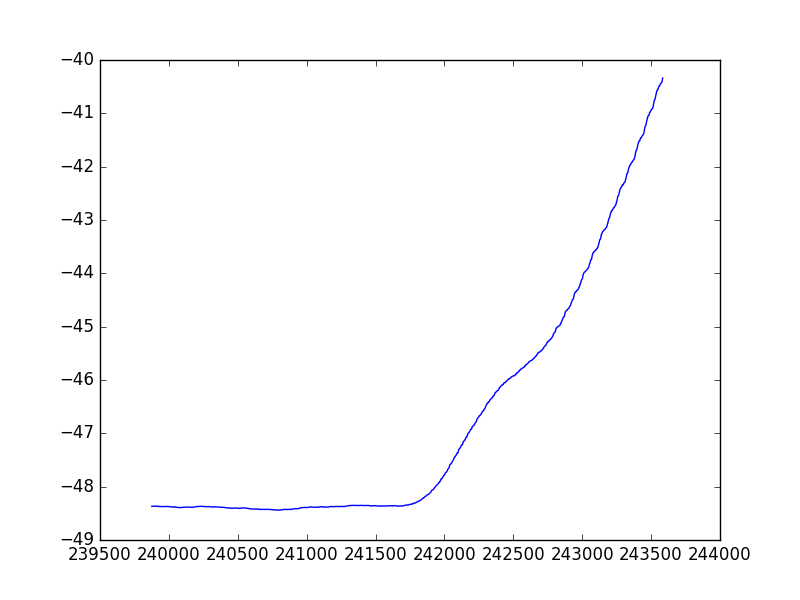 On bottom left of each of these 3 graphs, you can see a noise floor (nearly "horizontal line"). This noise floor fluctuates in a range < +-1 dB.

How to detect when the real signal begins, i.e. when the signal starts increasing?

Here is what I've tried:

Than let's check when the polynomial $f$ crosses the horizontal line $y = floor$.

It sometimes works, and better than all I've tried so far. But it's not perfect: 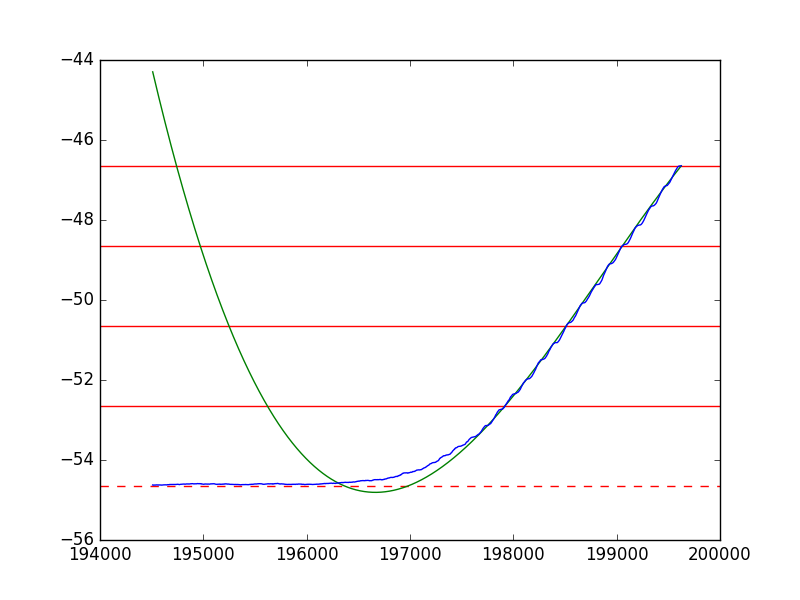 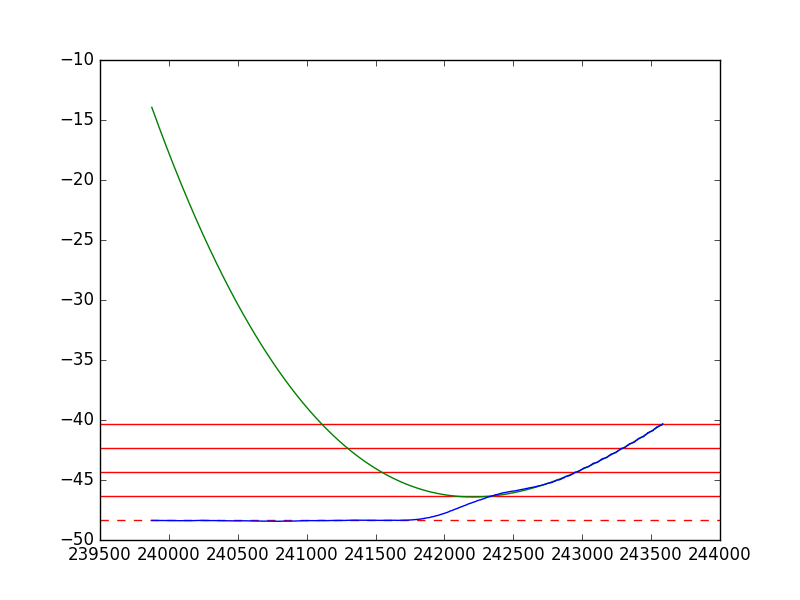 How to do better than this?

Note: a simple threshold-detection of when the signal goes higher than $noisefloor + 0.5 \ dB$ as "the time when the signal starts" is not precise enough for my application.

There are a couple of approaches you can take here. One is to fit a model that includes an "activation" parameter and then try to see when does that parameter transits to activation and take that point as the beginning of the onset. If you set off down the path of model fitting, eventually you are going to have to train your model on a number of these curves so that it learns all the different possible "avenues to activation" there might be. For example, the third trace shows background activity, transiting to an intermediate plateau, transiting to full on activation and even in the "activated" region its slope might show further variation.

So, before you start looking at those techniques, maybe you can try the plain old technique of detecting outliers through the statistics of the signal.

As a human being (?) you seem to have a good idea of when you would like to consider this curve as being "on". Therefore, collect all samples of your signal within the "background" region and use something like a boxplot or fit a distribution to this data. The simplest example of that distribution would be a Gaussian that has a mean and standard deviation. This models your "normality" region. Any value that could have emerged from that distribution is dubious as to whether it belongs to the "background" or "activated" segments. But that is not true for all values because soon enough (as time evolves towards the right), the curve will start pushing towards extremal points of the distribution where the probability of generating such a value becomes smaller and smaller.

Putting a hard threshold there, would give you an estimate of where the "activation" region starts.

After more information about the problem was shared, I am more inclined to suggest one of the onset detection techniques which will work directly on the audio data.

In any case, the following (cave) illustrations might help a bit more with the earlier suggestions in this post. 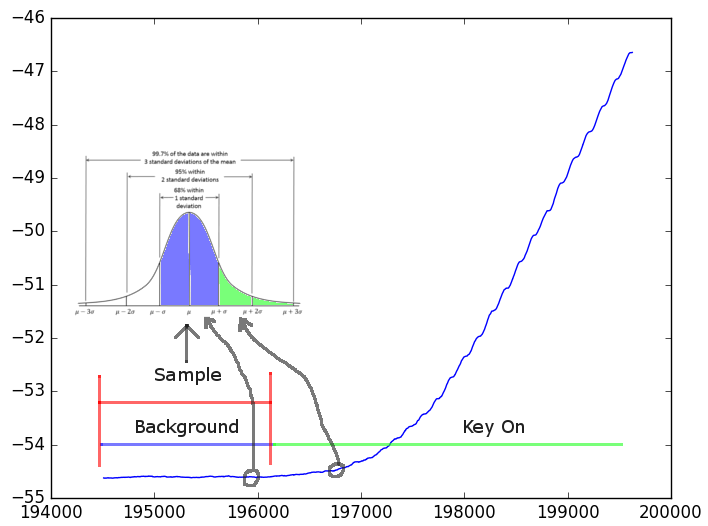 The "Human being" comment comes into play when determining the point of earliest transition from "background" to "key on" (rather than doing it automatically). You use the data in the "background" part of the waveform to estimate the statistics of what it means for a sample to be coming from the "background" part and use that to determine a threshold beyond which the samples are now more likely to belong to the "key on" part. 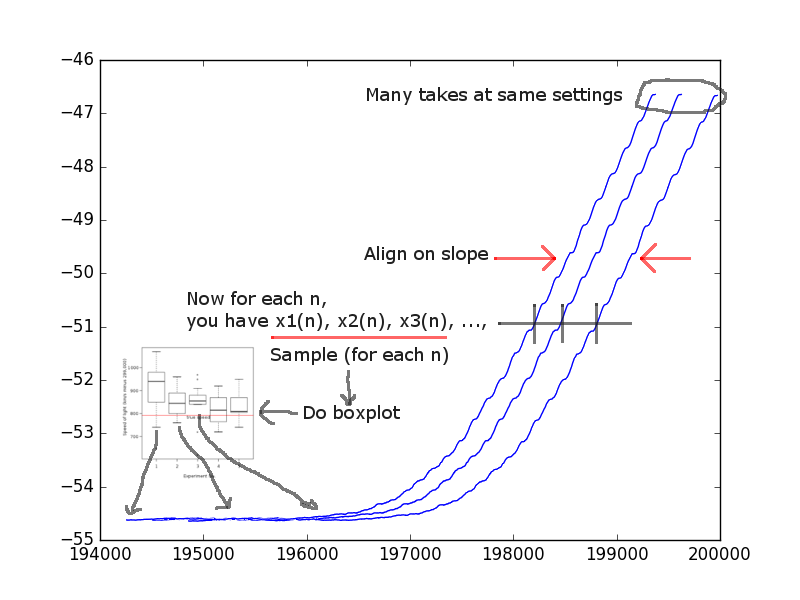 Combine many takes at similar settings by aligning them on the "Key on" slope and summarise all of this data with a series of boxplots, each one telling you the sort of value limits you can expect at each time instance. Use that information then to choose the point in time when there is deviation from the background.

(Inset images of boxplot and distribution from this and this wikipedia articles respectively.)

Have you tried plotting $ y[n] = x[n+1] - 2x[n] +x[n-1] $? It is the discrete analog of the second derivative. You might even want to apply the curvature formula, but since you are coming from horizontal there probably isn't a big difference in the results you would get.

I made a slight error in my comment. Here is the proper formula for the "second derivative" with spacing:

Your denoising and cleaning may be part of the problem. Humans might instead pattern match the opening noisy unclean inharmonic transient to detect note onset. Which may or more likely may not be anything like a polynomial curve fit.

Not the answer you're looking for? Browse other questions tagged discrete-signals audio signal-detection interpolation edge-detection or ask your own question.

4
How to detect underdamped harmonic signal?
2
Is step detection the correct approach to this problem? what if not?
0
MATLAB flanger...zipper noise, crackling, help with interpolation values?
1
Combining Bandpass filters on 1D signal to obtain better SNR?
3
Interpolating the peak of a cross-correlation using a centroid
0
Online interpolation of temporal signal
3
Count heart beat from audio capture using smartphone