This means If I have an image like this (but binary, foreground pixels shown in blue), the $0^{th}$ moment will correspond to the the perimeter, since it's an image of a contour : 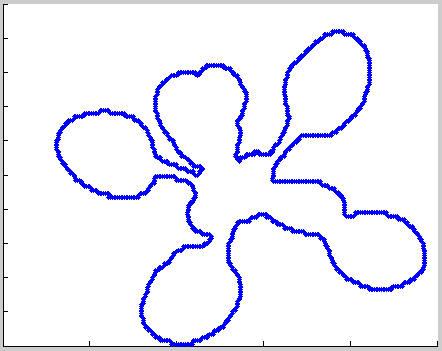 On the other hand, if I have an image like this (foreground shown as while), I will get the area of the object as the $0^{th}$ moment: 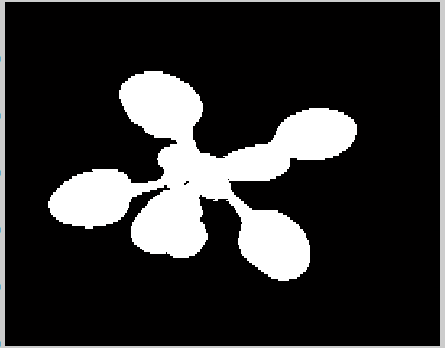 Since I want to use the contours to get more properties, I also calculate the higher order ($1^{st}$, $2^{nd}$, $3^{rd}$ order) raw contour moment. I want to use these to get the central moments.

Formulas I am using to get the central moments are:

Additionally, can I calculate the central moments based on contour raw moments?

Actually, I was surprised how hard was it do deduct a proper definition of contour versus "normal", non-contour moments of an image. After reading a bunch of materials, here come my conclusions.

Firstly, in order to understand moments, and especially the difference and the usage of spatial (what the OP calls "raw"), central, and central normalized moments, I found two very good materials:

Shortly, the spatial moments give information about the object in the image, i.e. related (dependent) on the object position.

The central moments are adjusted for translational invariance, by moving the origin of the "coordinate system" used for calculations to the centroid (center of gravity) of the object in question.

Finally, the central normalized moments are scaled by the area of the object, and are thus scale invariant in addition to translational invariance.

Now for the actual question part: what about contour moments?

The deductions from this part are mostly based on

And the most important quotes from those sources:

The moments of a contour are deﬁned in the same way but computed using the Green’s formula.

In plane geometry, and in particular, area surveying, Green's theorem can be used to determine the area and centroid of plane figures solely by integrating over the perimeter.

Based on that, I would deduce that contour moments does not refer to special measures of the object contours, but instead to a particular way to calculate image moments, only using the contour information (instead of pixel information for the whole image).

The difference, in the fundamental case, would be how both are calculated.

That would make the measurements slightly different for real images because the methods would differ in their: sensitivity to: noise, scaling, discretisation (pixel grid instead of continuous image). Also, the speed: calculating using contours is faster than using the direct approach. I would speculate that they would give perfectly equal results for an (idealized) continuous black and white image with no noise.

So, to answer your questions: the moments should be the same (differing because of noise etc). You can use spatial (raw) moments calculated by both methods to determine central moments (that will still describe the same thing).

Further support of this claims is the existence of this article (I only read the abstract, but should be very relevant, and even the abstract is informative) from 1994:

Note about getting the perimeter measure: I think, to get the "perimeter" which is actually just area of the contour, I would calculate the $0^{th}$ moment of the image of the contours of the objects, but treat the contours as a really thin object, instead of as "contours of an object".

All further measurements would of course differ if you used this moment further.

No matter of contour or area moments, central moments mean moments that are computed in a centered reference frame, i.e., a frame centered on the mean of your phenomenon.

Also related, this question about vocabulary.

4
Verb for subtracting the mean?

17
OpenCV/C++ connect nearby contours based on distance between them
6
What Are the Differences in Four Different Types of Third Order Image Moments (Skewness)?
2
10 bit pixels convert to RGB
8
Which Noise Reduction Algorithms Are Used in Commercial RAW Image Processors?
0
Is there a way to find the contours of instances in a binary mask image by color?