So, suppose you have a superposition of cosines of the same magnitude: $\sum_{i}\cos[\omega_i t]$

When you take the Fourier transform, theoretically you'd expect to find $\delta$-like peaks of the same magnitude. But in practice, what I find is this: 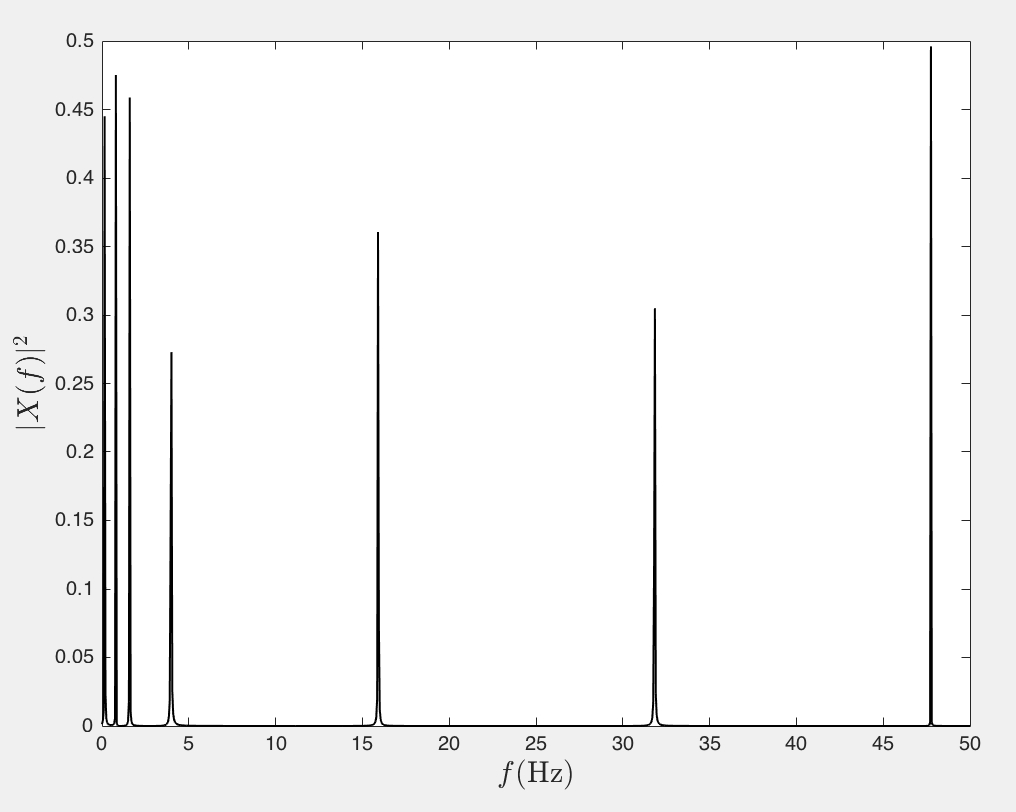 How would you explain this variation in the magnitude? Given such variation, would it be possible to recover the amplitudes of each frequency component in a superposition $\sum_{i}A_i\cos[\omega_i t]$

EDIT: I suspect it has to do with the relationship between the sampling frequency and the frequencies of the components. The fact that the theoretical $\delta$ response exists is a consequence of the orthogonality of the FT kernel. So, I suppose that in the discrete case, the frequencies of the DFT lines don't exactly "match" the sampled frequencies of the signal. I don't know how to articulate this properly or if it's even correct though.

For reference, here's the MATLAB code I used to generate this

I have a blog that concentrates heavily on DFTs. The primary concept you have to grasp is that it is different than the continuous so your "expectations" are incorrect. The key values are not the sampling rate and frequency in Hz, but how many sample points are in the frame and what is the frequency in terms of cycles per frame. When there are a whole number of cycles in a frame, the DFT behaves as you are expecting. When the frequency isn't a whole number, the DFT behaves quite differently than the continuous case. The "energy" of the signal is "spread" near the bin you expect. This spread is called "leakage". It is possible to recover the frequency of the tone from the values of the leakage.

These are the articles I've written on finding the frequency of a pure real tone in a DFT:

Exact Frequency Formula for a Pure Real Tone in a DFT

You will find a lot more literature on frequency estimation than amplitude and phase calculations. My blog article, Phase and Amplitude Calculation for a Pure Real Tone in a DFT: Method 1, gives a way to calculate an exact answer for a single tone and a good estimate in the presence of other tones and noise.

You can get much better values in a multiple tone situation by removing the effects of the other tones from the DFT and recalculating the values for each tone in an iterative manner. Formulas for the direct calculation of the other tones' DFT values can be found in my articles DFT Bin Value Formulas for Pure Real Tones and An Alternative Form of the Pure Real Tone DFT Bin Value Formula.

A blog article detailing this is in the pipeline. For the case you site, a mix of pure cosines, my method will separate all the tones out and give you exact answers.

This question is well-addressed in other posts; I would refer you elsewhere, but since you probably want the answer, here it is.

A couple of notes:

But this recreates the right amplitudes. The idea is you need to normalize by the number of data points you are using (I didn't come up with this code myself; I stole it from here: https://www.mathworks.com/matlabcentral/answers/162846-amplitude-of-signal-after-fft-operation).

Without further ado, here's the code you want:

Not the answer you're looking for? Browse other questions tagged matlab fft fourier-transform frequency-spectrum power-spectral-density or ask your own question.

7
Confirmation on how to calculate phase differences at every frequency point between two wideband signals?
26
What is the difference between PSD and squared magnitude of frequency spectrum?
4
Peak to peak amplitude of sum of sinusoidals (harmonic frequencies)
4
PSD estimate using FFT - scaling and units
0
psd of an ac voltage signal
0
Converting PSD to Time Domain Signal
1
Smoothing PSD plot
1
Finding set of orthogonal basis functions for composite signals
1
Understanding $\mathsf{FFT}$ of $x(t):=\cos(2\pi f_{0}t)$