I am confused with my own intuition of the frequency response of a chirp signal.

In this case, the chirp signal is a frequency modulated signal with initial frequency starting at 100 Hz and ending at 300 Hz for 2 seconds.

What is wrong with my assumptions? 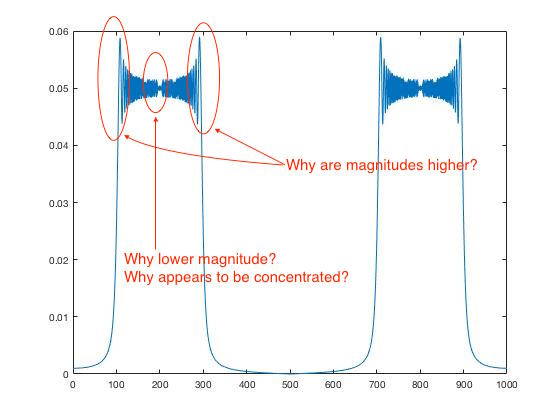 Also do not neglect the fact that you are using a discretely sampled signal. You can create a 'cleaner' chirp by explicitly modifying the magnitude such that you have a perfectly clean magnitude and then convert it into the continuous signal using ifft. If you do fft of a signal generated with trig functions you will inevitably end up with artifacts due to the simple fact that your values are discretized and so may not fit exactly into the same fft bin when you transform them.

Not the answer you're looking for? Browse other questions tagged frequency-spectrum dft spectrogram linear-chirp or ask your own question.

5
Error in power spectral density computation
3
Spectrogram, time vs frequency localization, and length of signal
0
Obtain the frequency response of a time domain chirp signal
2
Scale FFT frequency range for a bars graph
2
How do I calculate peak amplitude of the signal components after zero padding and FFT?
0
How can I "smooth" square wave/pulse data to remove/reduce harmonics?
2
Designing a Chirp in the Frequency Domain