I've been learning to implement an IIR filter for a synthesizer project. It is now more or less stable when the parameters are constant, but ultimately I want the parameters to be arbitrarily modulated.

I figured it would be too slow to compute new recursion coefficients every sample, so instead I'm computing them every "chunk" (a piece of 256 or so samples which the synthesizer produces in a batch and then sends to the audio driver). This brings me to my question:

How should I approach hotswapping the recursion coefficients? Or is there a more correct way of modulating IIR filters? 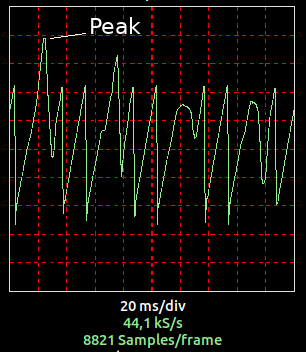 All ideas and advice are welcome.

I have implemented the biquads in a lattice topology, as per Robert's suggestion. Modulation now works great, but raising the cutoff frequency too high (or too low for a high pass filter) breaks something. This should be a single biquad low pass filter with cutoff $\frac{3}{4}\pi$: 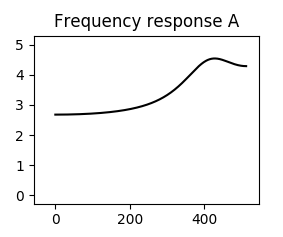 The direct form parameters, from which the lattice is derived, work just fine. It is certainly possible, that there is some error in my equations for the conversion. I also noticed that the shape of the frequency response isn't quite as steep as with the direct form. I am suspecting it has something to do with the "tap" coefficients..

What could be going on now? Perhaps I should make a new question with details about my implementation, as the original issue is now more or less solved.

okay, using the snipping tool, i tried to put in just the 2nd-order IIR lattice in the following drawing. $x[n]$ is being input in the upper left. the numbering for the $v_*$ coefficients is horrible, but i just cut this drawing out from somewhere else. 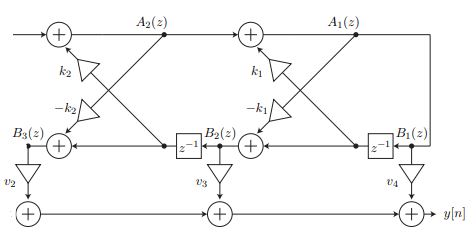 now the transfer function i get for this is

and if you compare that to the standard direct form

you should have equivalence when

i would appreciate it if someone else would check my work. i could well have fucked up a sign or something.

so, wherever you get your five Direct Form $a_k$ and $b_k$ coefficients (e.g., the Cookbook, but remember to divide everything by $a_0$), you can convert them to the five Lattice Form coefficients with the above equations (assuming i didn't mess it up).

Not the answer you're looking for? Browse other questions tagged modulation infinite-impulse-response real-time or ask your own question.