I have a mystery audio signal that I need to decode, it's from a discontinued product. Inspecting the object code shows a module called decodeFSK so that suggests it is a form of FSK. I've tweaked it in MATLAB ad-nauseum but think I must be missing something.

The only documentation I can find says:

Not sure if the 4-8kHz part is correct, as I don't see much there?

Here's a closeup of the peak at the 12.4kHz carrier. Is this perhaps BPSK instead of FSK?

here is the waveform and my attempts to decode it so far: waveform sample | matlab file

Any help much appreciated!

After playing around in GNURadio, this waveform looks like 2 level ASK bursts (OOK bursts plus some residual carrier).

At the 44.1 ksps sample rate, there appears to be about 7.6 samples/symbol or a symbol period of about 173.5 microseconds (assuming the symbols are not Manchester encoded). 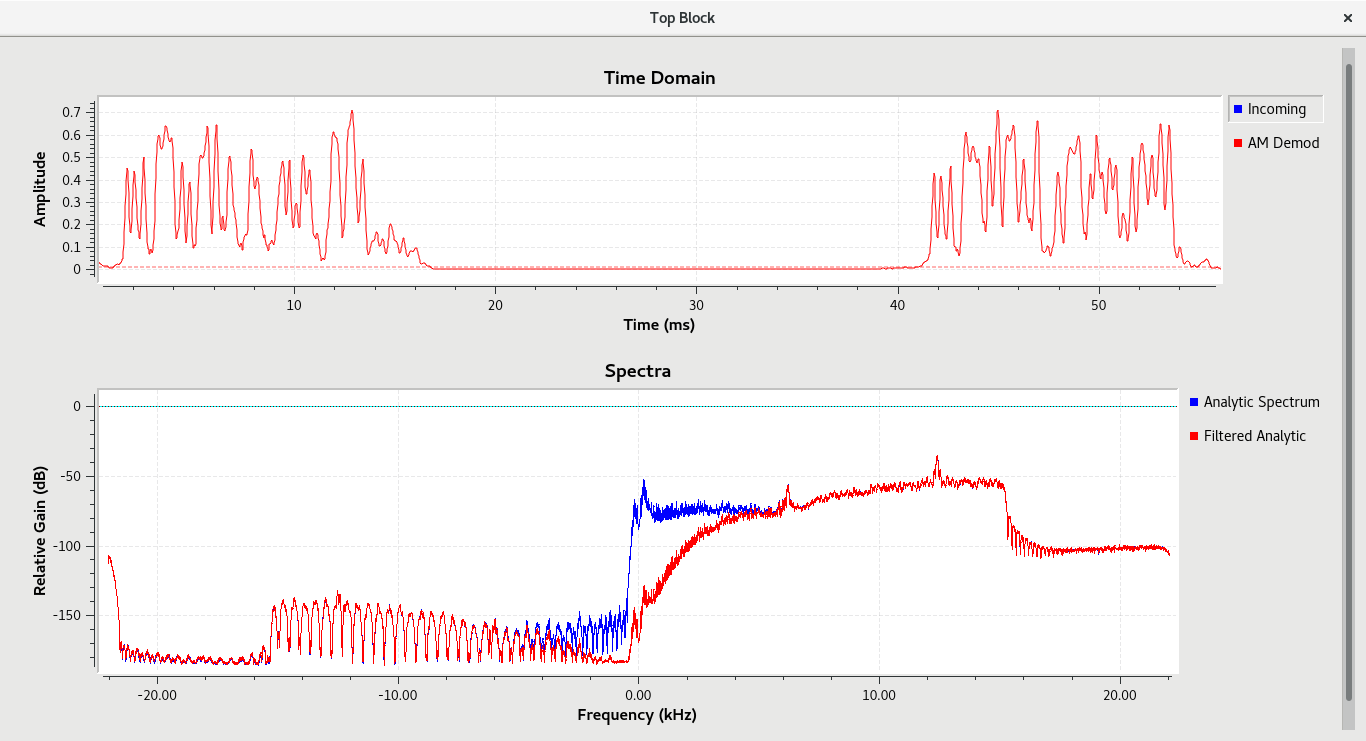 What I mean by 2-ASK with residual carrier is that, during a transmission, the original signal is probably something like:

where $q(t)$ is the train of unipolar message bit pulses. With a square pulse matched filter in the receiver, one is going to get ISI, which you can see in the short (suspected) preamble of the bursts.

By the way, I have not checked the phase to see if the bursts are the real part of QPSK with a non-standard rotation (which would result in 4-QAM with constellation points only on the real axis), but that seems unlikely for a low parts count biometric headphone device.

The signal you provided was already low pass filtered with a corner at about 15-16kHz, indicating something was going to decimate this to a 32 ksps signal.

What I did in GNURadio is in the following flowgraph image:

I used the "Hilbert" block with a 201 tap Hilbert FIR filter to make the real signal analytic. 201 taps is obviously overkill, looking at the negative frequency side of the spectrum.

I then used a Blackman-Harris windowed high pass filter, with real taps, with a corner at 4 KHz, a transition width of 1 kHz, and an objective stop band attenuation of 20 dB. This was to get rid of the mess near DC. Some of the mess at DC was tracking with the signal, but some of it seemed unrelated.

I then took the envelope with the "Complex to Mag" block.

I don't know how you captured this signal, but it would be better if you can do something on the analog side to improve the signal level or SNR, and also preserve the component that was likely at 18.6 kHz, since you're using a sample rate of 44.1 ksps.

I'm getting exactly the same information you are. Would it be possible for you to acquire more symbols? It might be possible that not all frequencies are present in the time sample you captured. Correlating the signal with itself I see plenty of similarity. Each burst lasts about 900 samples at 44100 is about 20 ms. 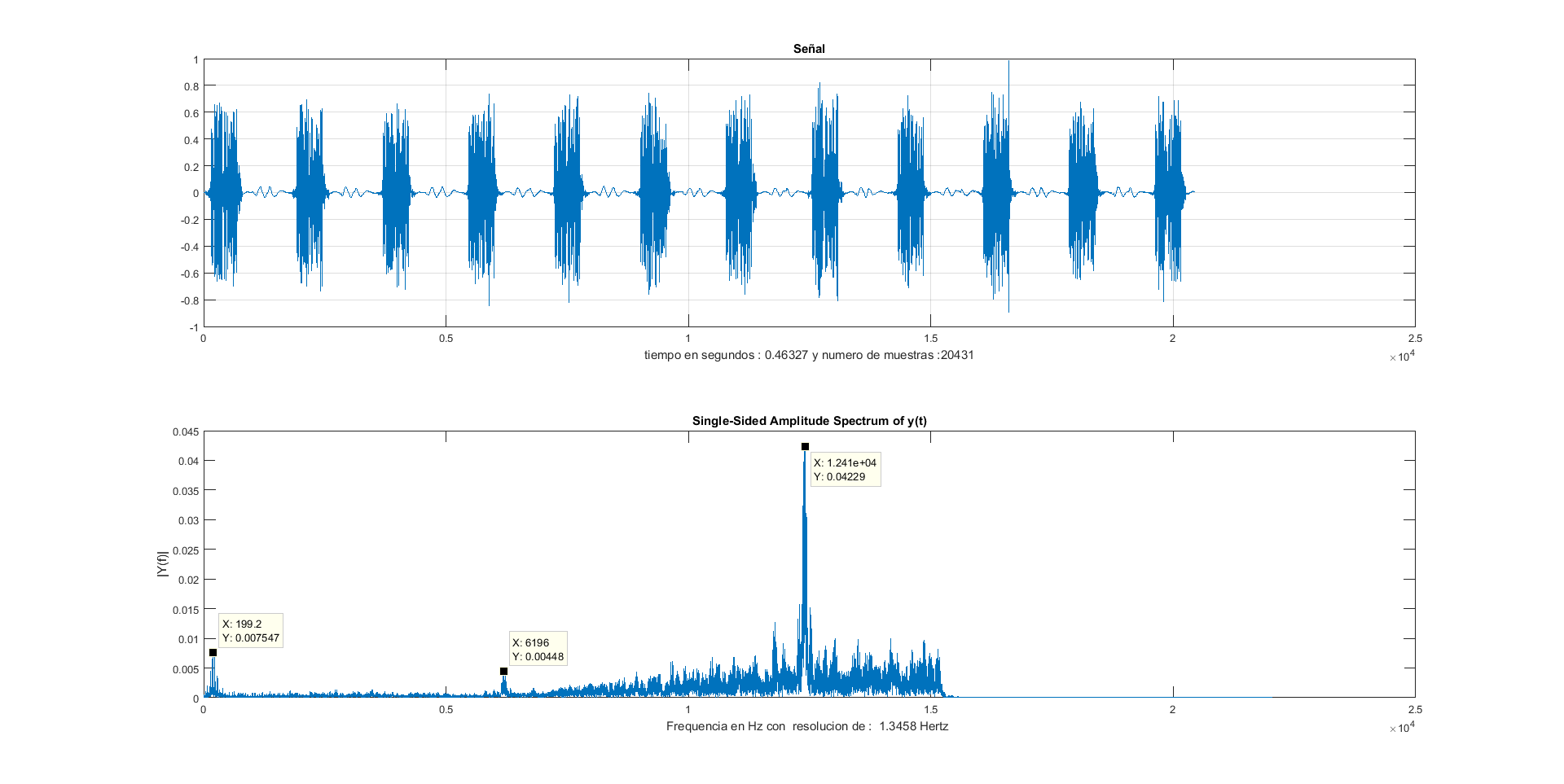 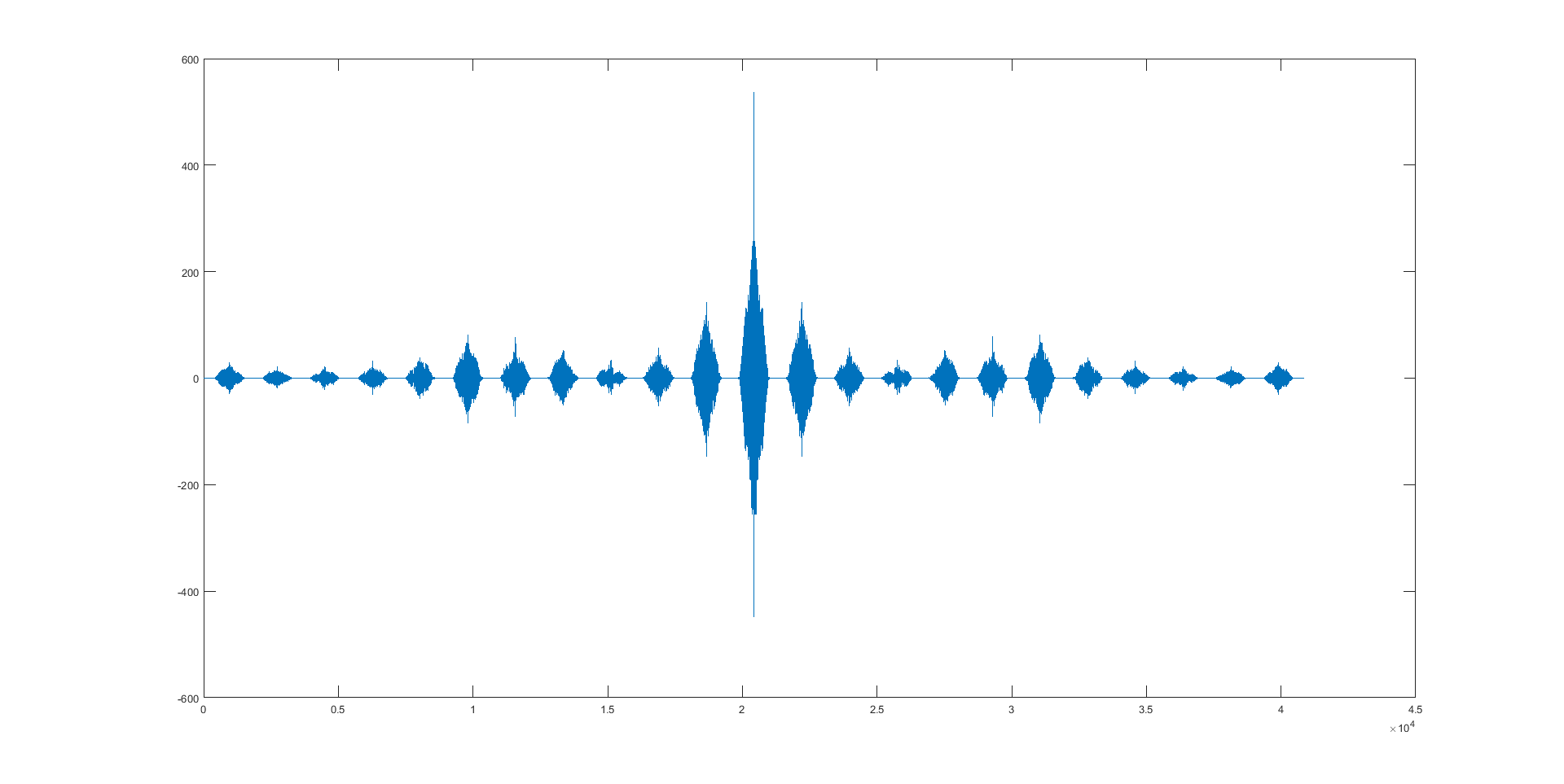 Not the answer you're looking for? Browse other questions tagged frequency-spectrum demodulation fsk or ask your own question.