I have computed Fourier transform from ecg data.It does obey Parseval's theorem, relation

is fulfiled. But after I use window function (Blackman,Hann,Hanning) energy is not conserved anymore.Is this normal? If not,how can I normalize my windowed fft?

I calculate fft this way:

And thats how it look when I plot. I'm a little worried about how almost all windows drastically reduce amplitude,again is this normal? 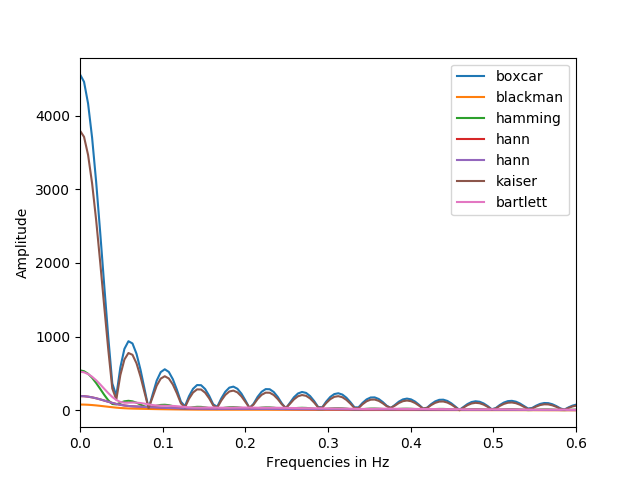 Thank you in advance for all help.

now stochastically your typical squared sample $x^2[n]$ will have some expected mean-square. the notation we use is either the left-hand or right-hand side:

now this is only true if $x[n]$ is sufficiently random, in comparison to and independent of window $w[n]$:

this scaling feature is based on the assumption of $x[n]$ being random and independent of the window $w[n]$. it's really then an approximation for your specific application that gets more accurate as the width of the window (which is $N$) gets large in comparison with any noticeable period of $x[n]$.

Parseval's theorem will hold, but take into account that your signal in the time domain will no longer be $x[n]$. Namely, if you have that

While the Fourier transform, discrete or continuous, can be regarded as unitary transform i.e a naturally norm preserving change between orthonormal bases in a normed complex vector space, the windowed FT does not in general possess this quality. And non-unitary operators cannot be turned into unitary ones by re-scaling. Here is why:

Unitary operators can be diagonalised over the complex numbers and all eigenvalues are of magnitude 1. That means if you put a vector of a certain norm in, you get a vector of that same norm out, no matter what the vector is. The Fourier transform operator $F$ is unitary.

It follows that unless your window is a constant magnitude window, the magnitudes of the eigenvalues of the composite operator $FW$ are not constant and cannot be rescaled to 1. Therefore in this case you can always find two different input signals whose magnitudes are changed differently, excluding the possibility of a single normalisation factor.

Or like I commented above: The windowed Fourier transform is not (in general) unitary.

However, you might want to consider if the question was even a sensible one to start with. For all practical purposes you want to preserve the energy of the windowed signal. And this is still guaranteed by the unitarity of the Fourier transform.

First, let us take a little step back. Parseval's theorem, sometimes called Rayleigh's identity or energy theorem, is part of a more generic theorem, the Plancherel theorem, itself related to the Bessel inequality: in an Hilbert space, if $e_{1},e_{2},\ldots$ is an orthonormal sequence, and $\left\langle \cdot,\cdot\right\rangle$ is the scalar product, then:

The main message here is that, even for orthogonal transforms, energy preservation is not granted.

There are many flavors of Fourier transforms: continuous, discrete time, discrete, Fourier series, and many others. For the first ones it happens that, their properties entail that, for (many) Fourier transforms, the Bessel equality is indeed an equality (with mild hypotheses on the function).

This is quite important in applications, and their associated algorithms. In simpler words: whenever one removes stuff from the Fourier domain (filtering, deconvolution, restoration, etc.), s(h)e removes the same stuff in the original domain (time, space). Energy conservation, even approximately, plays a great role in algorithmic stability, inverses, etc.

So, the present question is, for is the window for, and what are its effects? The span is large. A uniform window is likely to have little effect. A very concentrated window would have a tremendous influence, because it will only concentrate on some signal samples, important of not.

Simply put: take a uniform window, it does not affect samples, and Parseval-Plancherel is preserved. take a null window except on one sample, the energy could vary a lot, depending on where the window is located. At one extremity, if you applied a zero window, the signal would be zero, with zero energy, so you does retain the energy of the original signal. Somehow, the window effect is related to both the window shape, and signal's properties.

Now, when one is sliding windows, like in time-frequency/multirate filter bank processing, each sample at the end sees the window passing, and get an equal share of amplitude. For properly chose windows (with unit energy), correction factors is more easily applied.

For a single signal frame, the outcome will be signal/window dépendant a lot. Let us concentrate on discrete signals $x$ and a given window $w$.

For the FFT side, the window is uniform, and the relationship between the signal energy and the FFT version is linear, as shown in the following graph:

Details follow. For a uniform window, the dependence is strictly linear: 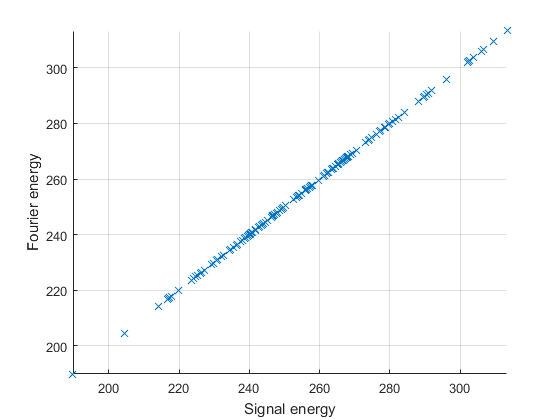 So, no big deal. But for non uniform windows, what can happen? For a Gaussian random data, and a window drawn from a positive random, unit energy uniform distribution, you get: 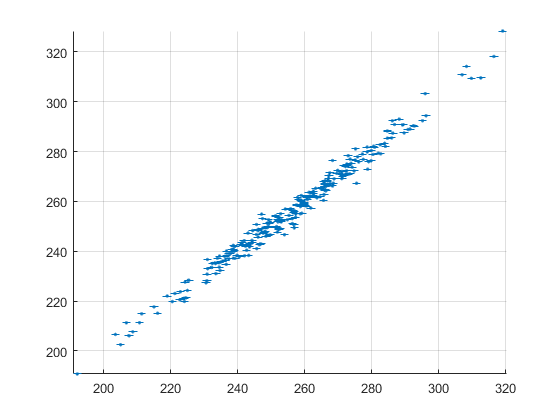 So, the slightly dispersed cloud tells you that there is not single factor you can apply in general to preserve energy with a window, although the relation is close to linear.

In practice, you could employ a more flat window, which reduces the portion of samples (at the edge) that are distorted with the window. Raided cosine windows can be useful in this option.

From an alternative side, DSP people have developed techniques to compensate the amplitude or energy variations, as described in:

Tendero's answer clearly explains why Parseval's theorem is still valid so I'll just address the question of getting the correct magnitudes (normalization). First off, it should be emphasized that windowing always results in energy loss (except in the case of a rectangular window). In order to compute the correct magnitudes we must compensate for this energy loss. Fortunately, this is rather easy to do.

The first thing to do is to compute the two sums, s1 and s2 respectively, which will be different for every window type. The actual sums will also depend on the FFT/window length (len). These two sums will be used later for scaling the magnitudes (normalization).

//c++ code (using a Hamming window as an exmaple)

Now, in order to compute a normalized power spectrum (for every bin), we can use the following equation

In order to get magnitudes in decibels, you can use

Not the answer you're looking for? Browse other questions tagged frequency-spectrum python window-functions signal-energy or ask your own question.

5
FFT to spectrum in decibel

6
Constant Magnitude Chirp across audio band (Parseval's Theorem?)
2
how do windowing functions not distort the signal?
0
FFT - Effects of Windowing,Improvisation approaches on RealTime FFT Hardware
1
DFT normalization for amplitude estimation
7
Is spectral leakage due to windowing 'different' for the DTFT and DFT?
1
Band energy and Parseval theorem
3
How does a rectangular window affect the signal?
4
Is there an equivalent of Parseval's theorem for wavelets?
3
Understanding Parseval's Theorem with Discrete Wavelet Transform