I have a low-resolution image in which the high frequencies are missing. When I apply an edge sharpening filter some of the missed high frequency is recovered.

I am wondering why this edge sharpening process in the image domain produces new high-frequency information in the frequency domain? Is this new information reliable?

Edges are not the best defined features in images.

However, they can be associated, locally, at a certain scale, with relative variations in intensity along a first direction, combined with a relative smoothness in a complementary (for instance orthogonal) second direction. When looking along the first direction, the 1D intensity profile exhibit variations, faster than in the other direction. Several typical edges profiles exist, as depicted below. 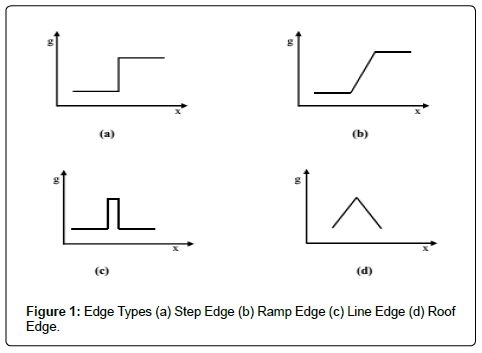 Those are typically enhanced by derivative-like operators, which are weakly sensitive to flat, linear or generally regular intensity variations. In other words, they behave as band-pass or high-pass operators. In the other direction, gradient detectors offer more smoothing (more low-pass).

Another vision is to smooth an image, and subtract this result from the original image. By removing low-frequencies, higher ones are relatively amplified. But to avoid noise amplification, some smoothing is often included in the process.

Hence, linear or not, edge operators tend to emphasize mid- to high frequencies relatively to the lower ones. However, all this may happen at different scales, depending on the edgy objects of the picture.

Now, Is this new information reliable?

Not really, if you rely on mere filtering or enhancement. It is easy to produce spurious edges. But within a restoration or inverse problem context, with models and an objective function to minimize, more reliable information can be obtained, as long as the models mimic well the physics of your acquisition scheme.

Not the answer you're looking for? Browse other questions tagged image-processing discrete-signals fourier-transform edge-detection or ask your own question.

12
Can edge detection be done in the frequency domain?
1
Which kernel produces sharper image
3
Edge Detection on a Color Image
6
Equalization and then Sharpening vs Sharpening and then Equalization
1
Why are edges in spatial images represented as edges in their Fourier transform image?
1
Applying frequency-domain filters on a centered Fourier transform
5
Is Unsharp Mask (USM) Equivalent to Applying Laplacian of Gaussian Filter Directly on the Image?
6
Should Edge Detection Be Applied in Spatial or in Frequency Domain?