I wish to create a finite impulse response filter to decode a dolby digital matrix encoded 2 channel signal into 5 channels. These filters would then be used in a realtime pipeline on a Linux machine using jack and jconvolver to do the convolution.

The equation is as follows: 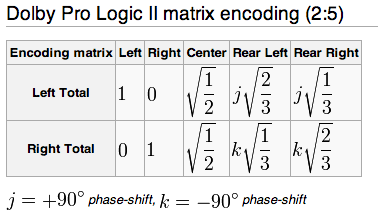 The reference for the above equation is: http://en.wikipedia.org/wiki/Matrix_decoder

It would seem this should be able to be done but I haven't the faintest how. Any help, and in particular working code that could generate the filters (Octave or other open source preferred) would be much appreciated!

Suppose that we had two channels encoded in some form in two signals according to a matrix. Recovering the original signals would be straightforward using the matrix inverse (or impossible, if the inverse did not exist). The situation is no different here, except that the matrix is not square, so you cannot use the conventional matrix inverse. You can, however, use a pseudoinverse or generalized inverse to reconstruct the original signals.

Other matrices which are not equal to an inverse may work also succeed, and may in fact sound better. I don't know the psychoacoustic situation, but it may more sense to do some transform based on the position of speakers for example. Certainly, the inverse seems like a good place to start.

As one would expect, the decoding matrix shows left/right symmetry.

Now you can easily obtain formulas to express the three front components as functions of the encoded left and right signals. For the two rear components, you have an equation in the time domain with a complex component.

The operating principle, then, is that the encoding technique functions in part by encoding the left/right rear components in quadrature.

The Hilbert transform is infinitely long, so it must be truncated and expressed as either a FIR filter, or depending on your circumstances, a FFT-IFFT operation. A causal Hilbert transform will delay the rear channels, so your other filters will need to be delayed by some amount to compensate.

In practice, all of the output signals depend on the two input signals. That is, you take two input channels and produce one output channel five times. Your JACK pipeline will need to accommodate this.

Jbarlow's answer is excellently derived but misses a major issue: Almost all of the "better" surround sound decoders such as Dolby Prologic, DTS Neo 6, Lexicon, Bose Videostage are "dynmaic", i.e. they looks constantly at the signal conditions and adjust the decoding matrix in the fly based on an estimate what the original signals may have been.

The main problem here is that the encoder is "lossy", i.e. a lot of information is lost during the encoding process and you can't fully recover the original signal. A simple example: let's say you start a "left" signal. That encodes to Lt = 1 and Rt = 0. Decoding this again then leads to signal in all five channels and not just in the left like the original condition. The only way around this is to dynamically look at correlation and panning of the input signals and adjust the decoder matrix on the fly.

Finally, while jbarlow's equations are mathematically correct, it's typically not done this way, even if it's only a static decoder. The main issue is that this creates side to side cross talk, i.e. signals that where original in the left front can end up partially in the right front which highly undesirable from a perceptual point of view. What's typically used is roughly something like this (properly normalized that is)

In practice most people also don't bother with the Hilbert Transformer since most encoders that do a real time downmix (such as Blu ray players, set top boxes, or TVs) don't implement it in anyway.

Not the answer you're looking for? Browse other questions tagged audio convolution or ask your own question.