First of all, I've seen a similar thread, however it's a bit different to what I'm trying to achieve. I am constructing a robot which will follow the person who calls it. My idea is to use 3 or 4 microphones - i.e. in the following arrangement in order to determine the from which direction the robot was called: 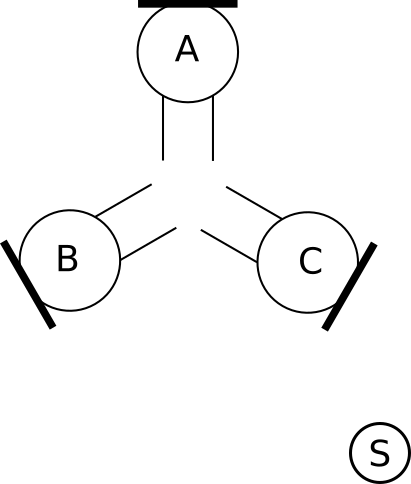 Where S is source, A, B and C are microphones. The idea is to calculate phase correlation of signals recorded from pairs AB, AC, BC and based on that construct a vector that will point at the source using a kind of triangulation. The system does not even have to work in real time because it will be voice activated - signals from all the microphones will be recorded simultaneously, voice will be sampled from only one microphone and if it fits the voice signature, phase correlation will be computed from the last fraction of second in order to compute the direction. I am aware that this might not work too well i.e. when the robot is called from another room or when there are multiple reflections.

This is just an idea I had, but I have never attempted anything like this and I have several questions before I construct the actual hardware that will do the job:

I felt that this #2 question looked fun so I decided to try to solve it on my own.

If you know your linear algebra, then you can imagine that you have placed the microphones in a triangle where each microphone is 4 mm away from each other making each interior angles $60°$.

So let's assume they are in this configuration:

So the following things are true:

And the cross product is simply $\overline{AB}×\overline{AC}$

So what you end up with is the following equation:

In other words, just make something simple like this:

And perhaps you only want to react if the sound source is coming from a specific vertical angle, if people talk above the microphones => 0 phase change => do nothing. People talk horizontally next to it => some phase change => react.

So you might want to set that threshold to something low, like 0.1 or 0.01. I'm not entirely sure, depends on the volume and frequency and parasitics, test it yourself.

Another reason for when to use the absolute value equation is for zero crossings, there might be a slight moment for when the direction will point in the wrong direction. Though it will only be for 1% of the time, if even that. So you might want to attach a first order LP filter to the direction.

And if you want to react to a specific volume, then just sum the 3 microphones together and compare that to some trigger value. The mean value of the microphones would be their sum divided by 3, but you don't need to divide by 3 if you increase the trigger value by a factor 3.

I'm having issues with marking the code as C/C#/C++ or JS or any other, so sadly the code will be black on white, against my wishes. Oh well, good luck on your venture. Sounds fun.

Also there is a 50/50 chance that the direction will be 180 away from the source 99% of the time. I'm a master at making such mistakes. A correction for this though would be to just invert the if statements for when 180 degrees should be added.

Not the answer you're looking for? Browse other questions tagged sound-recognition or ask your own question.

18
Feature extraction for sound classification
2
Baby Cry Sound detection
1
Is there a public repository of labeled sound files coming from an industrial area?