I'm trying to figure out how to create a good spectral envelope of a signal.

Basically I am, at present, taking a windowed section of audio applying an FFT and generating a bar chart style representation of the magnitude of the spectrum.

However to add to this I'd really like to have a good spectral envelope overlaid over the top. Unfortunately I just can't seem to come up with a good solution.

I tried a simple peak picking algorithm where I find every peak in the spectrum (I literally just look for points where the current value is greater than the values in the buckets either side). This returns me a set of peaks and I then use a catmull-rom interpolation to draw the line over the peaks.

This follows the spectrum reasonably as you can see in the following screenshot: 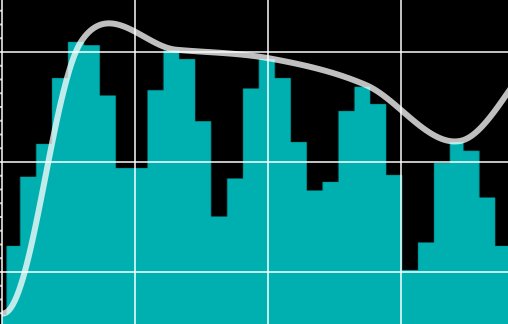 However its not ideal. In that image for example you can see how it doesn't follow the spectrum on the lefthand side.

When you zoom out: 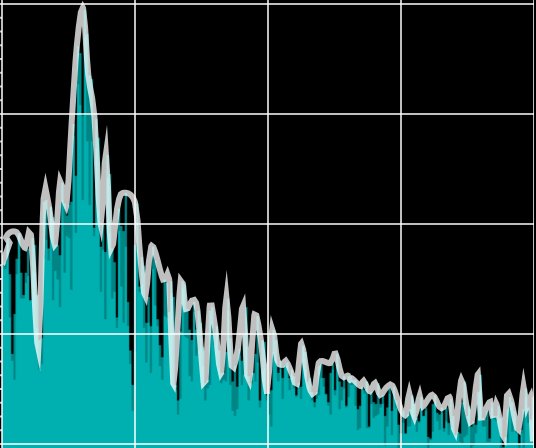 You see that the envelope is pretty jaggy. Its not terrible but is this really the best way to build a spectral envelope?

Is there a better way of picking the ideal peaks so that it truly envelopes the spectrum? If so can anyone point me towards algorithms?

Also is catmull-rom interpolation the best way of doing it? Can anyone suggest a better interpolation method and show me how to implement it?

The question is language agnostic but I'm writing in C++.

Edit: Ok I found an implementation of Auto-Regressive modelling.

I then implemented the method as follows:

This gives me the following result: 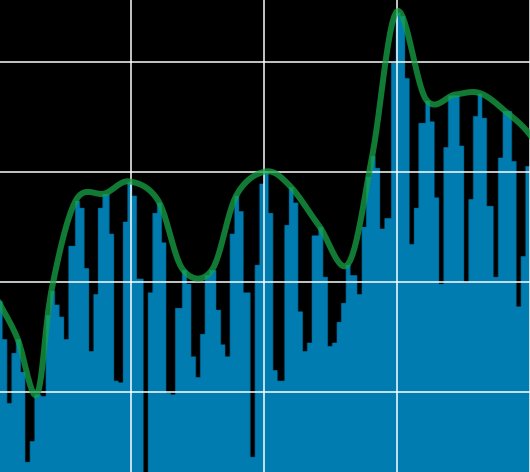 Which to my eye looks a HELL of a lot better. 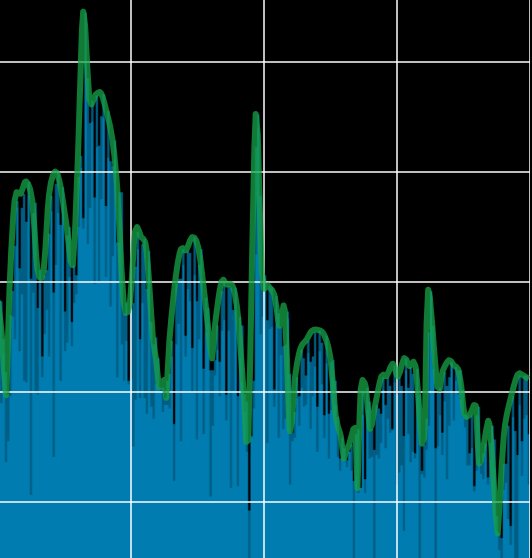 So I just want to check, if this is correct? If so I'll work along this path further :)

Two techniques commonly used for recovering the spectral envelope of an audio signal:

This seems to be more a question of style than anything really based in theory if I read this correctly. It's not clear exactly what you want. What information would you hope that your user could extract about the audio signal by looking at the display? If your signal of interest truly has a "jaggy" spectrum (and your example does), then I wouldn't see a problem with plotting a "jaggy" envelope.

In the first image, then, the first 5 bins would all be control points, and the interpolated envelope would travel through each bin's actual value, which would likely give a better-looking "enveloping" of the underlying spectrum.

It seems to me that your goal is to obtain a line which is always strictly above the spectrum. This goes against many signal processing methods which tend to have an energy conservation property - with these methods, lowering the resolution will spread a spectral peak over adjacent FFT bins (say a peak at 1.0 in bin n will become spread into 0.1 at bin n-1, 0.8 at bin n, 0.1 at bin n+1). Of course, "hacks", post-processing, etc., could certainly give something acceptable according to your visual criteria, the problem is that they would be meaningless from a signal processing perspective.

I would suggest a slightly different approach which would be of: a/ trying to stay true to a well-defined, established, signal-processing metric; and b/ have a "communication plan" about what you are plotting expresses, and how it is useful to the user.

First, you could communicate that you are plotting a low-resolution representation, which emphasizes less on individual spectral peaks, and more on the overall frequency distribution - which would be the "footprint" of the sound in the ear, independently of pitch. For this you could use:

Secondly, you could make use of temporal information; and communicate that what you are plotting is the current spectrum plotted on the backdrop of its "context" from the past few seconds - allowing the user to notice changes in sound (this kind of visualization is actually useful when setting up a multiband compressor).

Note that this last option is the only one in my lists that comes with the guarantee that it will be always greater than the current frame spectrum.