I am attempting to decode a 2FSK signal:

To normalize the data I do the following and get a resulting complex number with values ranging between -1 and 1 ... (more or less)

I demodulated with GNU Radio: 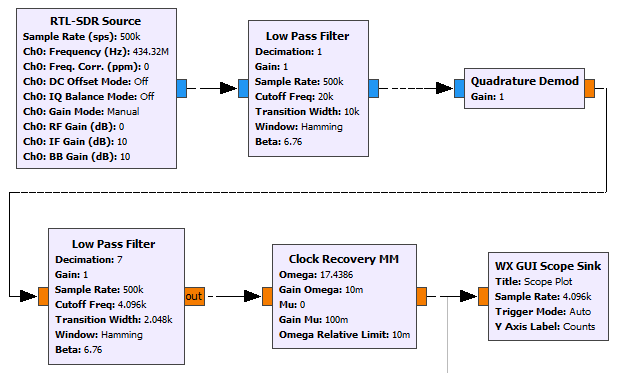 This is the parameters for the CC1101 (SmartRF Studio)

The project is for a USB receiver to receive and identify signals from pager buttons. Unfortunately the CC1101 only works well for about 60% of the pagers. That is why I want to use a RTL-SDR dongle and do my own demodulation.

GNURadio is great but it is a few hundered MB there is no minimal install ;-(

I would like to use the Goertzel algorithm to demodulate but it requires Real(float) input (not complex). If this is possible I could translate and compile the source to C or Delphi and create an executable that is maybe 1MB is size and a lot easier to deploy.

How do I prepare/use this data for the Goertzel algorithm? Here is the prototype of the Goertzel C# code posted in another thread, that I want to use.

It requires the data as an array of float. float* data https://dsp.stackexchange.com/questions/23749/normalizing-the-magnitude-of-goertzel-filter-c

From reading the code I can see that it is not an array containing complex numbers (just an array of float) and I don't know how to get my IQ data into the format required by the Goertzel algorithm.

Finally my appologies and thanks to Marcus Müller (answered below) who spent a lot of time and effort to answer my original post in great detail, which had some incorrect, incomplete and confusing information, which I have now updated to be more complete.

Goertzel is defined on complex numbers $I + jQ$, not real numbers. So, directly apply Goertzel to your baseband.

Your 1/128 scaling is unnecessary, since that's only a factor and doesn't contribute to the decision.

Also, your -127.4 (which almost certainly is a misunderstanding of some sorts) just kills the bias of unsigned integers coming out the device. Since that all ends up in the (not evaluated) DC bin of your DFT, you don't have to do that, either, and don't gain anything by doing so, either (numerical accuracy of floating point operations aside, but with any reasonable observation length, i.e. any reasonable bit rate, your accuracy cannot be degraded - after all, you start with just 8 bit of precision).

So, take these numbers, and feed them into your Goertzel, just converted to the data type your Goertzel implementation needs.

Now, note that FFTs work better, the smaller the prime factors of their length is. Under that point of view, 1 MS/s is a terrible choice – it's not a multiple of 2400 /s. So, instead, use a much smaller sampling rate that is a multiple of 2.4 kHz. What about 240 kHz? That would give you 100-FFTs, and of these, I get 1.3 million per second (you'd only need 2400 per second to follow your bits!).

So, the question really is why you came to the conclusion you needed 1MS/s for your 2400 bd signal in the first place. Unless it's absolutely unreasonably wide-spaced in spectrum, that's a waste of sampling rate. Your Dongle supports a wide range of sampling rates, among these multiples of your nominal baud rate – use such to keep your effort in range, or resample.

So, generally, regarding the question how to preprocess the data:

Use something that gives you samples that you can work with. I do like GNU Radio (that's what I used to build above flow graph), and it comes with all the tools you need. Even a weak personal computer-style CPU (like the ARM in a Raspberry Pi) will have plenty enough horsepower so that you can do a full FFT. Don't reinvent the wheel, though, but use existing implementations.

Of course, for detection of one of two potential frequencies, a Goertzel is actually more appropriate then an FFT. But if you're clever, you realize that actually you can get away with two Goertzels, one of which covers every frequency above 0, one every frequency below 0. That's not really any more efficient than a 3-point DFT, of which you just ignore the DC bin. So, I'd argue:

Not the answer you're looking for? Browse other questions tagged signal-detection demodulation or ask your own question.