I have multiple images like that shown below in which there are essentially two different brightness levels. I've looked into histogram equalization techniques in scikit-image as well as several background subtraction techniques in ImageJ, neither of which seem to be effective over the parameter ranges I've tested. I've thought of using edge detection to process the two regions separately, but my concern is that it will result in unnatural edge effects at the boundaries. There's also a lot of features in the image, making the simple edge detection techniques I've tried so far not work so well. 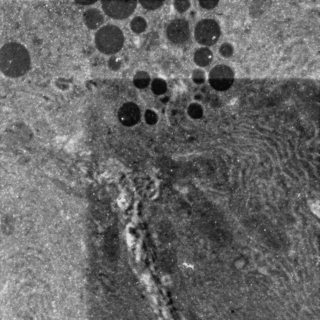 Are there better techniques for doing this sort of processing? I'm working in python with scikit-image, but would welcome any solution.

If it's not clear what kind of result I'm looking for, consider the below image that has an evenly balanced background. 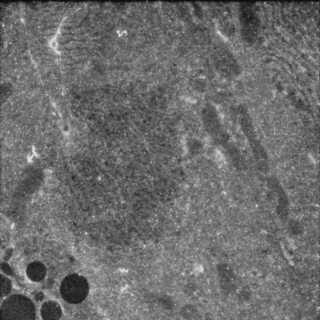 Histogram equalisation (on its own) is not likely to work here because it corrects the brightness levels of the image as a whole.

What you are dealing with here is a uniform reduction in brightness akin to the effect of an optical filter.

What is really required is the correction of the mean brightness level over the "patch" that appears darker. Therefore, the problem now is to find the patch and correct it.

I am going to use Octave for the rest of this post but as you will see too it is not too difficult to transpose the idea to Python.

Let's have a look at the damage: 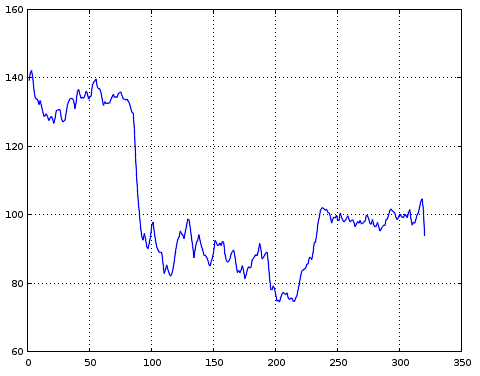 The most striking feature in this image is the sharp drop of the brightness level, about a third of the image width from the left.

Let's now look at the vertical cross section by "squashing" all of the image's rows into a mean column. All you have to add is: 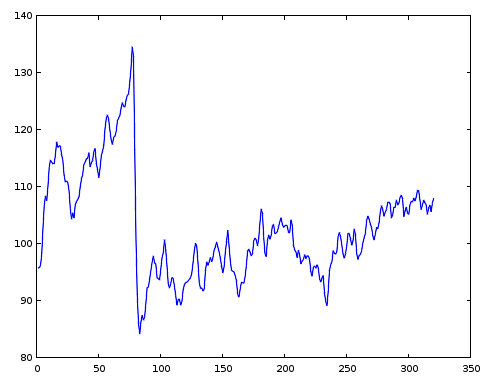 In fact, if you have MATLAB somewhere handy, you might want to try to surf(a) and that will show you the "basin(s)" very clearly. For some reason, Octave's surf is getting its triangles tangled when I try to do it.

Right, so, what do we observe from this?

Let's try to correct the X direction. First of all, we are going to get rid of the transition gradient. This is between pixels 85-93 (not across the whole image though, remember that this was a patch and that here we are trying to correct for the one dimensional case). 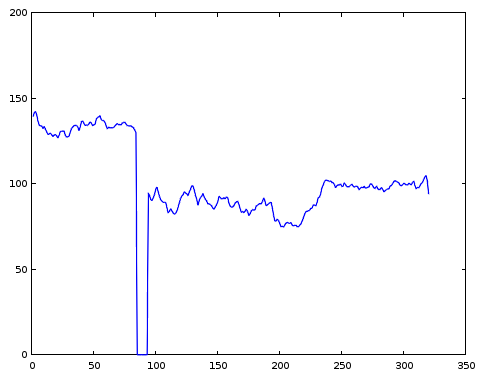 Now, correct for the brightness. The difference is approximately 36. All I am doing here is to add a "step" (a constant value) from pixel 93 onwards, like so: 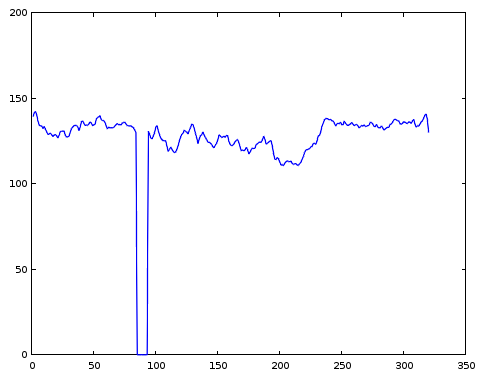 What can you do for that gap of 8 values? You can fill it in with a constant value but that is going to show up as a "band" of 8 pixels and it will definitely be visible. The other thing you can do is to fill it with some Gaussian noise that has approximately pixel value 36 mean and enough variance so that you cannot distinguish it from the surrounding pixels. Unfortunately, because in this case the noise would be uncorrelated that would show up as banding again but this time much more "fuzzy". And finally, the other thing you could do is to train a model that would "generate" realistic values from the surrounding areas so that you "heal" the bands gracefully.

This is the basic idea. To automatically find the gradients you can either extract the gradient of the image with imgradient or do a similar calculation in a loop with a threshold on the local slope.

Your problems are not over here. As you can see in all images, there are more than 1 "basins" in the image. Your first image has a light band on the top right part which goes right into the darkness right below it.

Hopefully they are all rectangular so you can simply repeat the exact same process as many times as it is required until the image contains "no basins".

Not the answer you're looking for? Browse other questions tagged image-processing python or ask your own question.

1
Background subtraction for object tracking
1
I have some questions about background subtraction with Gaussian Mixture Model (GMM)
2
Extending Background Image
0
Spectral Subtraction python implementation error
0
Producing masks from mostly-static-background subtraction when given the background
0
PSD subtraction
10
Auto Detection of Rotation Angle on Arbitrary Image with Orthogonal Features
0
Detect lines transitioning to blobs in images
0
Object identification based on both shape and intensity — i.e., identify the stars and their diffraction spikes at the pixel level