How to make the impulse response sparse? How does one know that the channel is sparse?

Dankers, Jalilian, and Westwick have explained the way they have done parameterization under their algorithm on page 4 and (10). How does one do parameterization of impulse response to decide for sparse/non-sparse?

How you parameterize your sparsity will depend on your application. The authors of that paper, in a paragraph on page 231 say:

which is why they clump the coefficients together in $P$ blocks of start time $t_{B_k}$ of duration $n_{B_k}$.

For one impulse response this is shown in their figure 1(b). 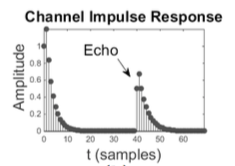 The overall sparsity will depend on the reflections and delays that they have when this impulse response is used by the direct signal and all its indirect reflections.

You need to decide which coefficients in the overall impulse response are zero. To do that, you need to decide why they are zero (what is the cause?). Perhaps there is a long dead-time between the onset and the first secondary response.

How does one do parameterization of impulse response to decide for sparse/non-sparse?

Once you've decided on the form, you decide on the structure of the non-sparse parts of the response and how they are separated from each other.

This comes down to how do you choose $t_{B_k}$ and $H$. That will depend on what system you're trying to model.

Channel/system identification is an important topic in data processing. One wants to retrieve the behavior of systems given some inputs AND hypotheses. In other words: people hear the sound of a gun in some place. They want to know where the gunner is. Must of of have already experienced that we sometimes are mistaken on the real origin of a sound. To cope with that, one generally resorts to physical laws, several listeners, and additional assumptions.

Assuming linear systems, the heard sound (observation) comes for the source called $s$. The listen sound is a linear combination of the source distorted by its propagation through different media $h$: air, reflection on walls (echoes), and unrelated disturbances ($n$, noises). The linearity entails that, often, one can model the observation as a convolution plus noise model:

As we don't know the medium precisely, and the noise is stochastic, resolving this equation with a unique solution is infeasible in general. One solution is to suppose additional natural constrains. Those would restrict the size of the set of potential solutions to, hopefully, a unique faithful one. Parametric models for the system is often not known. One of the simplest assumption is that those are easy to describe. This is a pre-scientific concept called sparsity or parsimony. It is often related to Wilhelm of Ockham, under the idea of the law of parsimony: in today's termes, among several models to describe of data set, the "simplest" can have a special favor. There are optimization methods to solve this.

A sparse system/signal has many zero components. An interpretation is taking values in a labyrinth.

Not the answer you're looking for? Browse other questions tagged digital-communications speech-processing moving-average sparsity sparse-model or ask your own question.