how does this equation correspond to smoothing?

Please help me understand smoothing of data. This is a follow up to my previous question posted here. Especially the top answer by Junuxx where he says a way of smoothing a function $f(x)$ is:

here we can see that for every point in $f[x]$, we are taking a weighted average of that point and its two adjacent points, to get a smoothed version of $f[t]$ called $f'[t]$.

helps us get the value of y as a recursive smoothing of x. Here $a[i]$ acts as a smoothing parameter and it is itself calculated as

If this question is not relevant when the equations are taken out of context then I will be happy to provide more details.

The first equation you give is the difference equation for a lowpass FIR filter, or a linear filter with an impulse response that is finite in duration. I'll write it a bit differently (so that it is expressly discrete in time and causal):

$f_s[n]$ is the smoothed version of the discrete-time input sequence $f[n]$, generated by passing $f[n]$ through an FIR filter with the coefficients $[0.1, 0.8, 0.1]$. The frequency response of this filter is as follows: 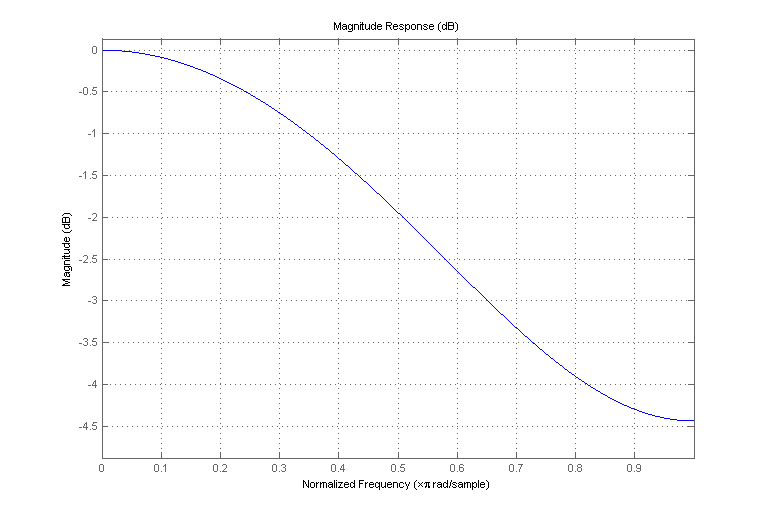 As it turns out, it's not a very good lowpass filter. As the name implies, a lowpass filter should pass low-frequency content while removing higher frequencies. This provides the "smoothing" action that you're looking for, as "jagged", non-smooth features are associated with high frequencies since they change rapidly with time.

Your second equation is an example of a lowpass IIR filter, a linear filter whose impulse response is infinite in duration. The filter's difference equation is:

where $x[n]$ is the filter input and $y[n]$ is the filter output. This type of filter is often used as a low-complexity lowpass filter and is often called a leaky integrator. It is favored because of its simple implementation, low computational complexity, and its tunability: its cutoff frequency depends upon the value of $\alpha$. $\alpha$ can take on values on the interval $[0,1)$. $\alpha = 0$ yields no filtering at all (the output is equal to the input); as $\alpha$ increases, the cutoff frequency of the filter decreases. You can think of $\alpha = 1$ as a boundary case where the cutoff frequency is infinitely low (the filter output is zero for all time).

As an example, if $\alpha = 0.8$, the frequency response of the filter is as follows: 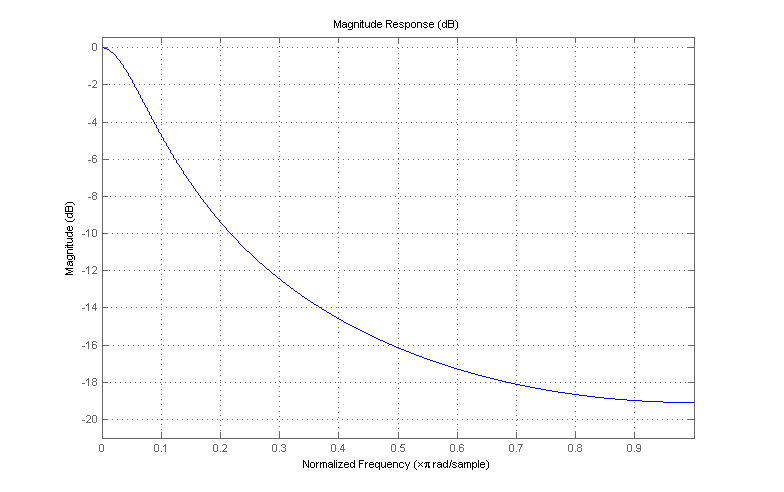 which is a better filter than your FIR example; it yields much better attenuation of frequencies toward the upper end of the band. Even though it might not be obvious by looking at the difference equation (because of the feedback from the filter output back to its input), it effectively performs smoothing on the input due to its lowpass nature. I'm not sure if this description will be particularly meaningful to you for your application, but these are pretty fundamental signal processing concepts; some study of introductory DSP texts could help fill in the gaps.

Edit: By request, here's a plot that shows both responses on the same axes, illustrating the relatively poor attenuation provided by the FIR example filter: 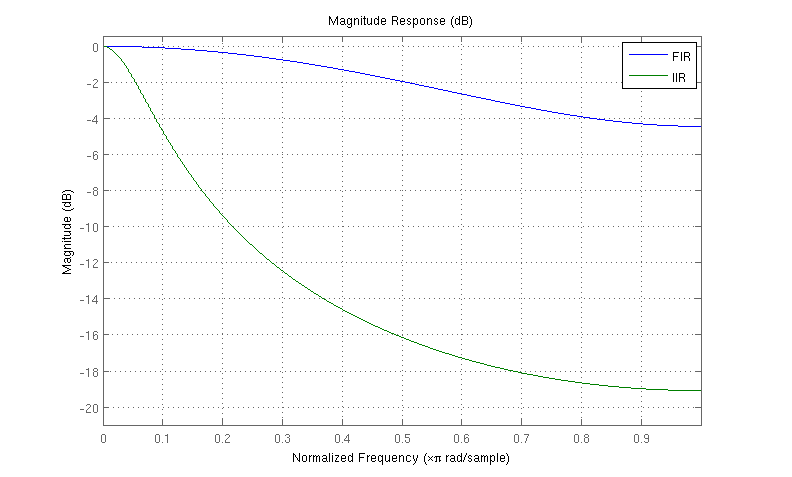 Not the answer you're looking for? Browse other questions tagged speech-recognition smoothing speech or ask your own question.

29
Is there a technical term for this simple method of smoothing out a signal?
18
what is smoothing in very basic terms
5
Is there a common name for the first order IIR averaging filter?
2
Mathematical Proof of Complementary Filter？
1
Help me in understanding smoothing

4
How can I smoothly interpolate between 2 position?
1
Help me in understanding smoothing
6
Issues with the smoothing operator in coherence estimation using the complex Morlet (Gabor) wavelet
3
How do I smooth this noisy signal?
3
Smoothing a power spectrum
0
How to smooth (or interpolate) phase of FFT and reduce data points
1
Smoothing a discrete function with point wise variances
0
Error introduced by smoothing filter at the end of a processing block