Can I combine an IIR (an EWMA) with a maximum?

I'd like to have a exponentially weighted moving average (EWMA) which is raised to the value of the input signal whenever this is higher than the filter output. This taking of the maximum shall take place during the iteration, not afterwards (which would be simple).

So effectively, my output shall fall slowly after a quickly falling edge in the input without rising quickly before a rising edge. 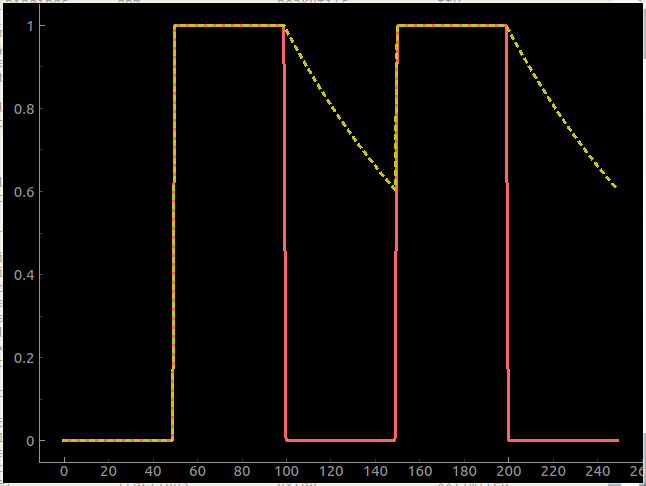 In fact, any other algorithm which just copies the input except for the places where it has a rapidly falling edge (there it should play parachute and let the output fall slower) would do fine.

The only restriction I have is that this needs to be implemented in the usual Python libraries (numpy, scipy, pandas); iterating myself will not be fast enough.

I tried applying a rolling maximum, followed by a rolling mean with a Gaussian window of the same width (using pandas.Series(arr).rolling()); this gives me nice smoothing of the fall after a falling edge; unfortunately it also gives me an equal smoothing before the rising edges (which I don't want).

If there was a way to apply an asymmetric Gaussian window (e. g. rising slowly and falling quickly) that would be a solution I guess. But I haven't found a way to achieve this yet.

What you are describing is an envelope detector which can be formed by a Peak Detector followed by an ADSR.

The peak detection is performed by the non linear 'max' filter as per your description. This, on its own, would track the maximum of the signal and stay at that max value.

To now modify that signal's dynamics so that it 'launches' and 'parachutes' at specific rates, you add the Attack-Decay-Sustain-Release component. You don't need all four stages. This could simply be an Attack-Decay (as per your needs).

In fact, in your application, the Attack is zero. As soon as a new max is detected the output of the system is reset immediately. But, while the new values are lower than the maximum, this 'output' now decreases at a desired rate (The Decay stage). In your case this could be as simple as o-=aRate if o>0 else 0 in the else branch of the if.

I am a long time programmer. I've recently learned Python, and I like it very much. However, if I were writing time critical applications I would not choose it. Even if it is being used as "just glue" to hold together a bunch of library calls. Likewise, I would not choose Java or Ruby either.

The algorithm you describe seems to do exactly what you want. If it existed in the libraries you mentioned you would have found it in the documentation. I think you should consider learning how to write your own C/C++ libraries for Python and include it that way. There are several ways to do this, and I haven't tried any so I can't give you any recommendations.

Not the answer you're looking for? Browse other questions tagged filter-design python lowpass-filter infinite-impulse-response scipy or ask your own question.

3
IIR oscillator produces stable output in MATLAB, unstable on chip, how do I tune it?
4
How should I select window size and overlap?
6
Issues with the smoothing operator in coherence estimation using the complex Morlet (Gabor) wavelet
0
IIR with asymptotic impulse response
0
python rewrite lfilter (iir) with for
0
Can I use IIR or FIR to get a sliding mean?
4
2D Multi Scale Dot Enhancement Filter based on Gaussian Filter and Hessian Matrix
0
Next steps for analyzing this PWM algorithm and choosing a low pass filtering technique?
3
Are IIR filters (and specifically Butterworth filter) causal?