I am working on a project that needs a lowpass filter with a -7.5 dB/Octave rolloff. This is somewhere between the rolloff of a one-pole and two-pole filter, so I wanted to ask what some standard methods are for generating this type of response.

Is it appropriate to have a two pole filter (or two one-pole filters in series) and do a wet/dry mix? Or would is there a more robust method I should try instead?

I am hoping I am able to accomplish this using a simple IIR filter like a biquad.

As far as I know there is no standard procedure for designing such filters. A simple approach would be to design a standard second-order low pass filter with the given cut-off frequency (such as a Butterworth filter), and then re-design the numerator coefficients such that the total filter approximates the desired magnitude roll-off. This is basically a (linear phase) FIR filter design problem, which is very straightforward to solve.

where the exponential term is a linear phase term corresponding to the delay of a second-order linear phase FIR filter ($1$ sample). 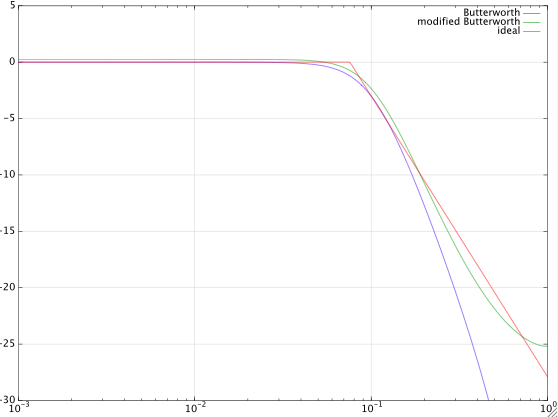 If you need a better approximation you can increase the order of the numerator (without changing the second-order denominator coefficients). So you'd get a biquad concatenated with a (short) FIR filter. The figure below shows the approximation with a $10^{th}$-order numerator polynomial and the second-order Butterworth denominator coefficients (in green): 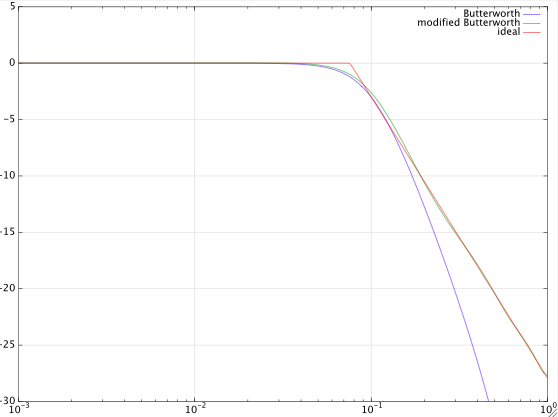 Not the answer you're looking for? Browse other questions tagged filter-design lowpass-filter infinite-impulse-response frequency-response or ask your own question.

1
Why is the gain of my IIR filter positive?
4
Least-squares digital IIR filter design (with arbitrary responses)
0
FIR / IIR and Wavelets
1
How do I find the phase response of a filter from the filter equation?
17
Filter design by distributing poles and zeros on parametric curves
5
Design of a digital A-weighting filter with arbitrary sample rate
1
Real-time modulated IIR filter
1
How to use Octave ellip() coefficients for 3-band C++ crossover
0
Design of Parks-McClellan Lowpass Filter
2
What is a simple method, if any, to calculate a variable IIR filter for audio effects in real time?