I would like to cite "fred harris rule of thumb" for estimating filter order. Is there a book or paper where I can find this rule of thumb? Thanks a bunch.

You can find the formula for (at least) one "Harris method" or "Harris approximation" in Multirate Signal Processing for Communication Systems, Fredric J. Harris, 2004, page 216, equation (8.16), with details in Chapter 3. F. Harris calls it "harris approximation" (without capital for the name), namely:

Former questions might provide you with additional insights and references:

Scanned below is the fred harris' "Rule of Thumb" which included the filter taps as well as his other "rules".

This is from DSP World ICSPAT Class Notes DSP World Workshops, Orlando, Florida, November 1-4, 1999. That course along with other similar presentations and courses by fred harris have significantly influenced my views and thinking of signal processing, and likely contributed to how much I've been interested in it ever since. 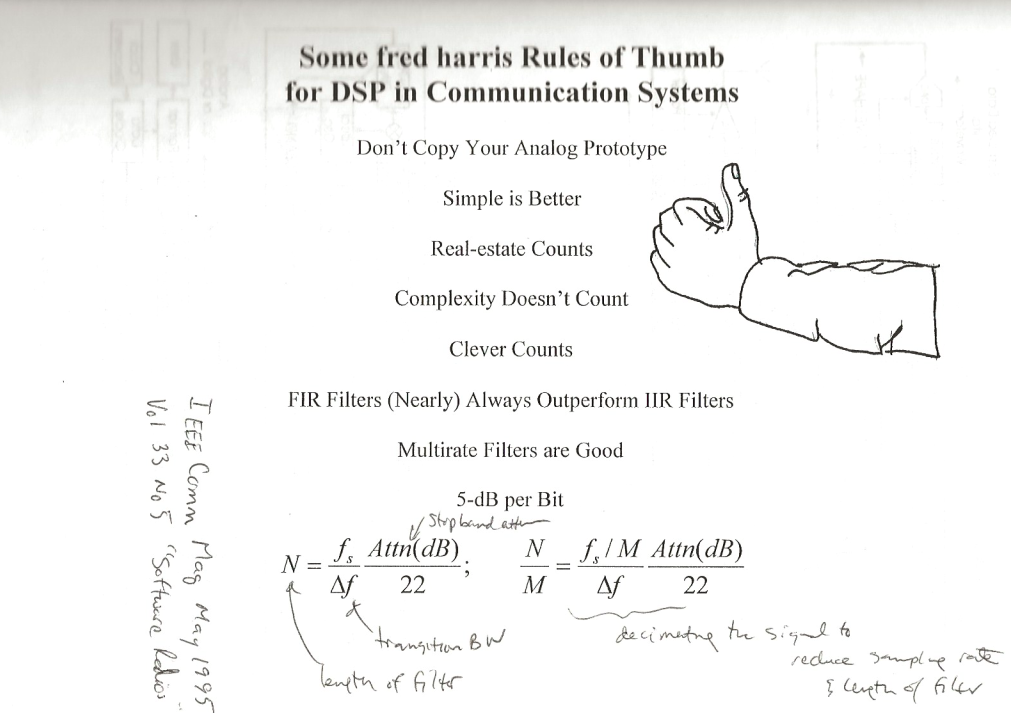 Not the answer you're looking for? Browse other questions tagged filters filter-design lowpass-filter or ask your own question.

22
How many taps does an FIR filter need?
14
Filter Order Rule of Thumb

7
Choice of Gaussian kernel parameters when lowpass filtering before image resampling?
1
What are the tradeoffs for more coefficients for fractional delay filter?
0
Realisation of a passive RC low pass filter
0
A question on filters
2
How to choose the size of a Laplacian of Gaussian kernel for filtering images fast?
14
Filter Order Rule of Thumb
2
Band edge filter for raised cosine impulse