Why is MEL used in DSP voice recognition if it's based on logarithmic human perception, and why is it effective?

MEL theory gives the ratio that average humans logarithmically hear equal distance pitches, and the cause for that perception ratio is unknown.

Is it because humans speak frequencies using the same frequency ratios by which they hear them, so that PC's need to know those ratios?

Is there a physical reason for the MEL to work well in DSP? i.e. is it an unwitting compromise between equal loudness contour relative to physical sound energy and the loudest most useful frequencies in voice recognition? 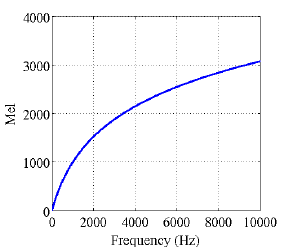 The Mel is an empirical model that describes the change in human pitch perception at different frequencies: until 1 kHz we perceive pitch changes in a linear way, after that, we perceive it in a logarithmic way, just as you said.

The pitch function relating real and perceived pitch differences is approximated based on the measurements made by Stevens in this work; an equation commonly used to approximate it is:

As I understand there is no mathematical reason for using it, is just choosing a model of how human beings perceive sound and applying it to some interactive human-machine application in order to enhance it's performance

Not the answer you're looking for? Browse other questions tagged mfcc voice psychoacoustics or ask your own question.

1
Voice Recognition - MFCC
2
voice recognition
12
Which transform most closely mimics the human auditory system?
1
Given MFCC values for some wav’s, how can I easily tell if all speakers are the same?