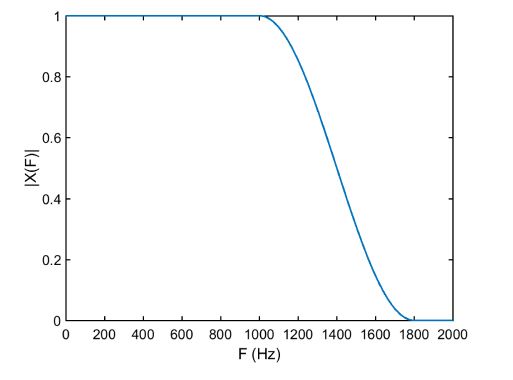 A continuous-time signal $x(t)$ has the magnitude spectrum $\lvert X(F)\rvert$ shown in Figure 6. The signal is sampled to obtain $x(n)$ using the sampling frequency $F_s$. Determine the minimum sampling frequency, which ensures that the information in $[0; 1000 \ \rm{Hz}]$ is not distorted.

Can someone explain to me why it is not and what formulas/intution is required to answer the above task?

This is one of those problems which ask for finding the sampling rate that avoids aliasing in the band of interest but don't care aliasing for the rest of the spectrum.

In this problem the real, baseband analog signal has a bandwith of $B = 1800$ Hz, which would require a minimum Nyquist sampling rate of $F_s = 2 B = 3600$ Hz when we are to avoid aliasing on the complete band of the signal; $-1800< f < 1800$ Hz which is depicted as the condition on figure-a below: (without amplitude scaling) 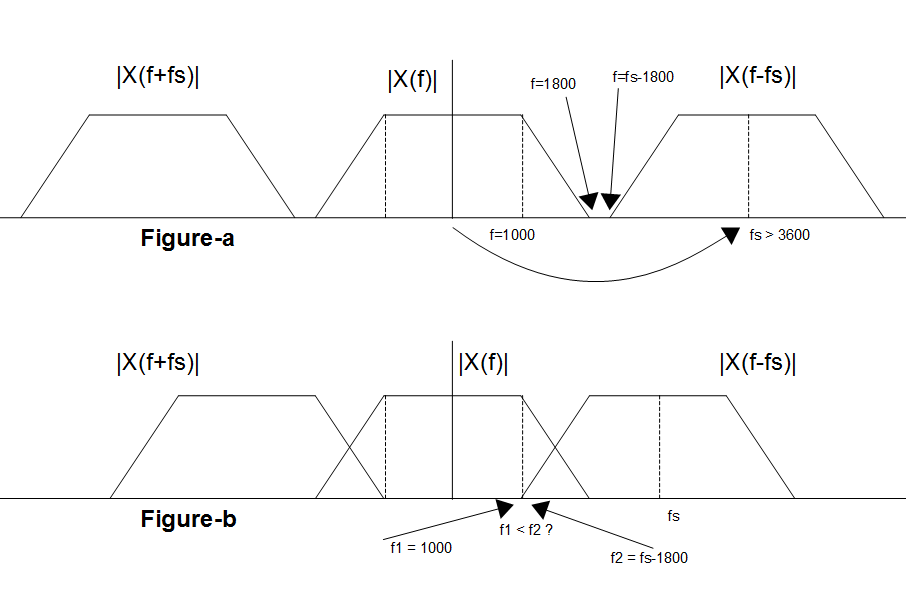 On the other hand the condition on the figure-b tells that if you want to preserve the signal only in the band of $-1000< f < 1000$ , then you can relax the aliasing condition to lower the sampling rate so that aliasing is prevented only in the band of ineterest; $-1000< f < 1000$ . That sampling rate you look is found by requiring on the shifted spectrum that, the leftmost cutoff frequency of right shifted replica is above $1000$ Hz of the unshifted replica, which is dispalyed on the figure-b.

Note that what you considered would be true if the signal was lowpass filtered to $1000$ Hz before being sampled. But in the problem no such antialiasing bandlimiting filtering is mentioned.

Hint #2: make sure you include aliasing in the exercise of hint #1

Not the answer you're looking for? Browse other questions tagged frequency-spectrum continuous-signals nyquist or ask your own question.

1
Determine Frequency Resolution samples
2
Spectrogram, time vs frequency localization, and length of signal
0
What is the link between equation of a continuous signal versus equation of its sampled form?
9
Signal values we will 'miss' between sampling instances during sampling of band limited signals
1
Calculate aliasing of $x_a(t) = \cos{(2\pi300t)} + \cos(2\pi600t)$ when sampled with $F_s = 1000$
3
analog-to-discrete-to-analog system sampling problem
0
How to plot the periodic digital spectrum?
2
Cross Domain Equivalent to Nyquist Sampling Theorem?
0
What is an example of using aliasing to your advantage when recovering an input signal?