I'm studying a mathematical behaviour of a servo motor and I need some help to understand it.

The output signal is $\beta(t)$, representing the angle rotated by the axis at instant t, in relation to the equilibrium position. On the servomotor there are two torques:

The feedback control system is given by: 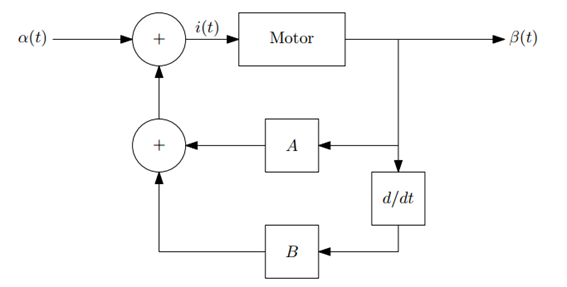 And $\alpha(t)$ is the input angle that give the desired position (angle) for the servomotor.

$B$ is unknown but we will assume $A = -1$ so that if the input is constant we'll have the output equal to the input (unitary static gain).

The transfer function of the system is:

By this expression we conclude that our system is a second order system with no zeros. By controlling the value of $B$ we will control where the poles are in our system and by that the type of system we get. More specifically:

So until this I don't have questions and everything makes sense to me. The next affirmation is what leaves me doubtful:

No more explanation is given to this and I'm kinda worried if my interpretation of this fact is correct or not. Here it goes:

Is this interpretation correct? I'm not sure if this is the correct relationship between friction and the type of system I get? I'm also curious if there is any more implication or consequence of this relationship. Can anyone clarify me please?

Your interpretation seems ok. Based on your basic model of the servo motor, you have a second order differential equation: $$I \beta'' + b \beta' + k \beta = \tau_{ext}$$

where $\beta$ is the position angle in radians, (customarily, $\theta$ is used for angles though), $\tau$ is the external torque applied on the motor (given by the input current and the mechanical load if it exists), $I$ is the moment of inertia of the rotating part, $b$ represents the effect of friction which depend on angular velocity (such as your damping friction effect), and $k$ represents the effect of position dependent torsional-spring force if it exists. In your system you only consider the angular velocity dependent friction force, and set $k=0$, (hence ignore the spring force). This yields the following differential equation:

The system can be analysed by Laplace transforming its LCCDE. Though I'm not sure how you reached your $H(s)$, assuming it's correct, then it can be seen that the coefficient $2-100B$ models the frictive force strength and as you have stated; by adjusting $B$ you will adjust the type of solutions from oscillatory underdamped to monotonic overdamped.

The physical interpretation of the result is also in line with your intuition; with more friction the motor will hardly oscillate but will be slow and inefficient; while with less friction the motor will respond faster but will overshoot and osccillate. The critical damping is the optimal solution which reaches the equilibrium as fast as possible without oscillations. That could be relaxed for practical reasons, and you can allow some tiny oscillations to improve the dynamic performance considerably, of course provided that a minute amount of overshoot is tolareable.

Not the answer you're looking for? Browse other questions tagged laplace-transform or ask your own question.

0
Connection with system analysis and laplace&Z transform
3
Control systems and convolution
4
What is wrong with my residue partial expansion method? (Transfer Function into State-Space Modal/Diagonal Form)
4
s-Domin or z-Domain - What to Use for Mixed systems
3
Laplace transform : integral vs poles & zeros