Why is it necessary to conjugate $f(t)$ while performing auto correlation or cross correlation with respect to $g(t)$, if $f(t)$ and $g(t)$ are complex signals?

Let me ask you another question, How will you compare two complex numbers $U$ (a+jb) and $V$ (c+jd)? By comparing magnitude? Subtract them and take real part? Multiply them and compare?

Since any complex number involves two entities ( one for magnitude |$z$| and other for argument $\theta$ ) any comparison involves comparison of those two entities. Suppose we represent $U$ and $V$ in a complex argument plane as $M e^{j \theta}$ and $N e^{j \phi }$ if we multiply both of them together, we get

If we seek maximum value out of the above multiplication then

Suppose our comparison is only about the relative location of $V$ with respect to $U$ in the complex argument plane, for the time being, forget about the magnitudes $M$ and $N$.

ie, when two complex numbers with bounded magnitudes get multiplied, their maximum value occurs, when the second number ($V$) is in the negative argument direction of the first number ($U$), ie in the direction of its conjugate ($U^*$). 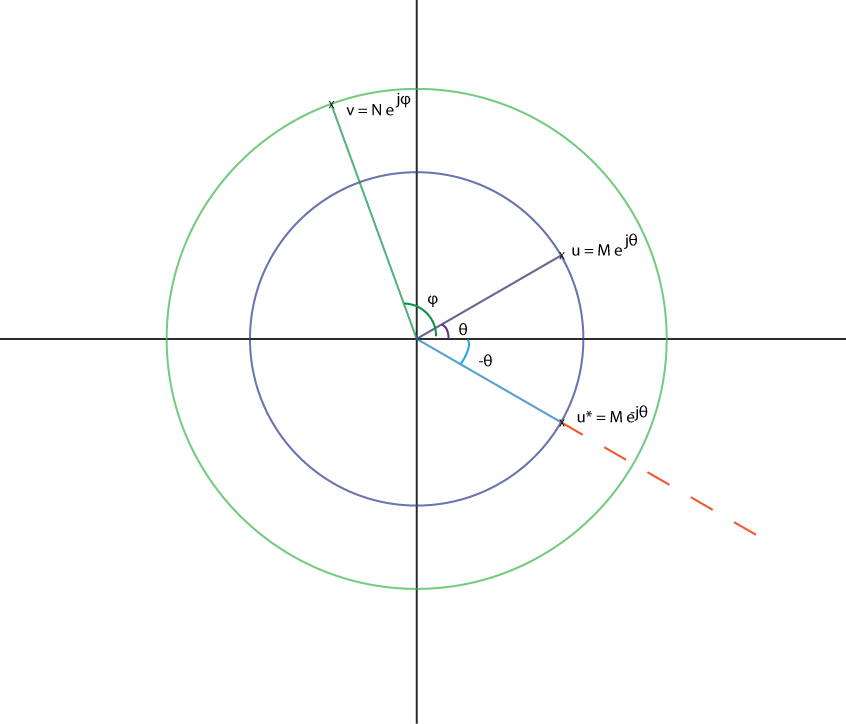 Considering two signals $f$ and $g$, correlation is given as

At any instant '$t$', a signal is just a point in the complex plane. So at any moment $f$ and $g$ are just two points in the complex plane. Then the job of comparison of two signal becomes a mere comparison of two complex points. With this logic, to compare two signals with a given lag '$\tau$' between them, just multiply point by point in '$t$' by taking conjugate of the other signal. If you get a big number that means both reference and compared signals are just looking in the same direction in the complex plane. When integrated on the whole '$t$', the value of the integration shows the how much similarity is between signal $f$ and signal $g$. that is which is known as the cross-correlation between two signals.

What is the physical meaning of the autocorrelation evaluated at lag $\tau=0$?

Not the answer you're looking for? Browse other questions tagged autocorrelation correlation or ask your own question.

0
What does $x^*$ mean in autocorrelation