what is better: up- or downsampling?

I want to compare two signals or curves. 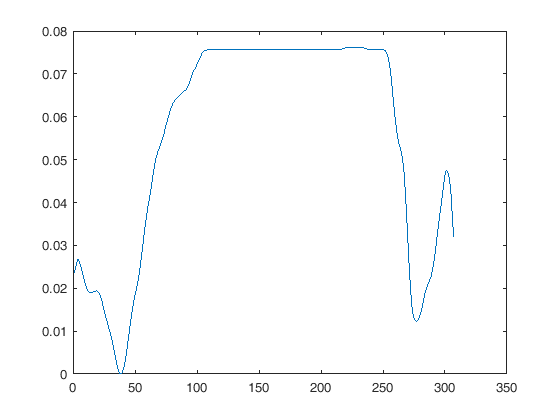 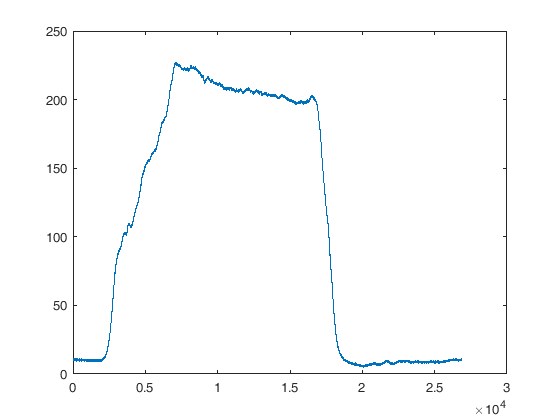 Unfortunately they have different sample rates. The first one is sampled at 30 Hz, the second at 2000 Hz. Matlab has the function 'resample' and I thought, this would make comparison much easier.

Edit: I did as I was told. In the picture on the left are the original curves. The curves on the right are resampled. Top right is upsampled, bottom right is downsampled.

I know the curves are of different length, when resampled. However, the second signal will get cropped to the first signals length. 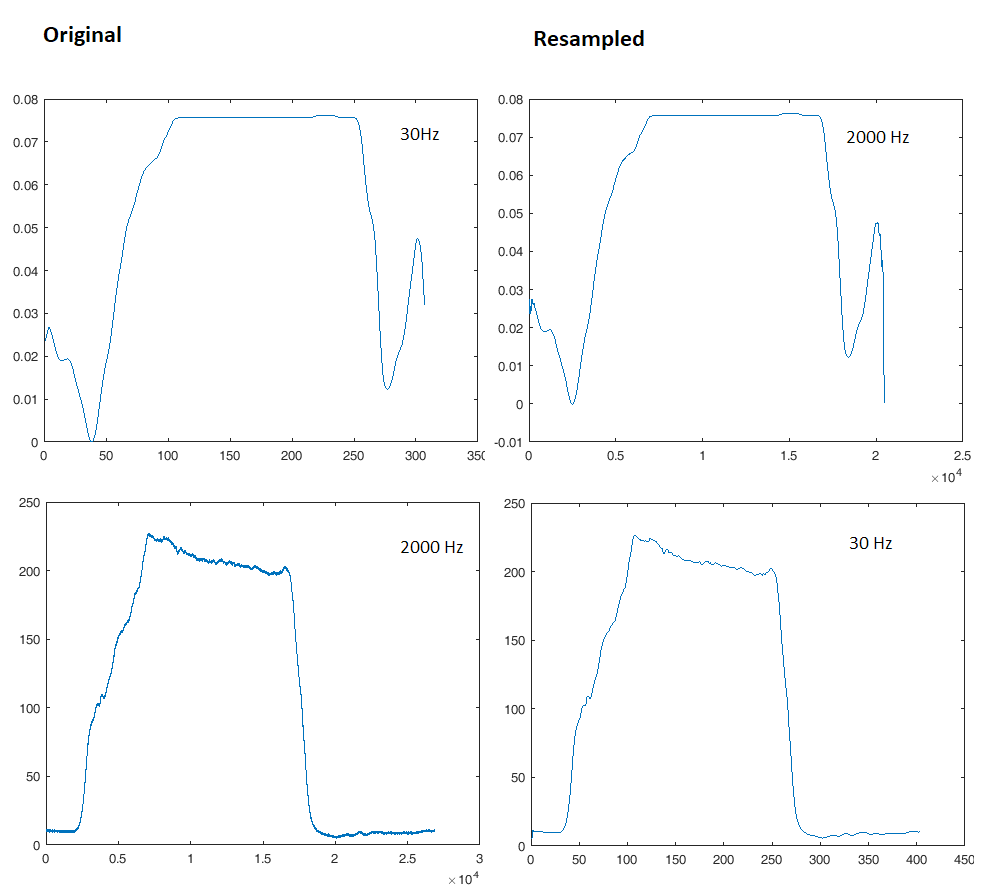 So if you compare data at different rates, and in an evaluation phase when one tries to define how the comparison should be done (which features are compared, with what metric, with which externals, like precision, efficiently, robustness, etc), a very basic first approach would be to upsample both signals by an integer factor to reconcile their sampling. Here, this is quite OK, 6000 Hz could work for both.

The reasons could be, for DSP practice:

Once you have spent some time on that, you are more ready to start from scratch again, and decide whether you should downsample or not, with which method, etc. to reach both safety and efficienty.

To provide alternatives, if you decide to compare data on the Fourier domain, you can easily cast two signals with different length and sampling rate to the same number of Fourier coefficients, helping a comparison in the frequency domain.

If you use a function like plot(x,y) the easiest way to display them on the same graph is to simply not resample any of them at all, but simply fill each x vector with proper values for each signal, so both appear where you want on the display.

You can also setup the plot to have two different x-axes (one for each curve) with different labels and legends if you want.

Now, about resampling. I'll use Fs for the sampling frequency.

A sampled signal cannot contain frequency components above Fs/2. It is bandlimited.

Also, a signal that only contains frequency components up to a frequency F can be accurately represented at a sampling rate of 2F.

Note that this "accurate" representation is mathematical, not visual. For a good visual representation, having 5-10 samples per period (thus no notable frequency components above Fs/10 or so) really helps the brain connect the dots. See this figure: same signal, the lower curve has lower sample rate, there is no information loss because the frequency is lower than Fs/2 but it still looks like crap. 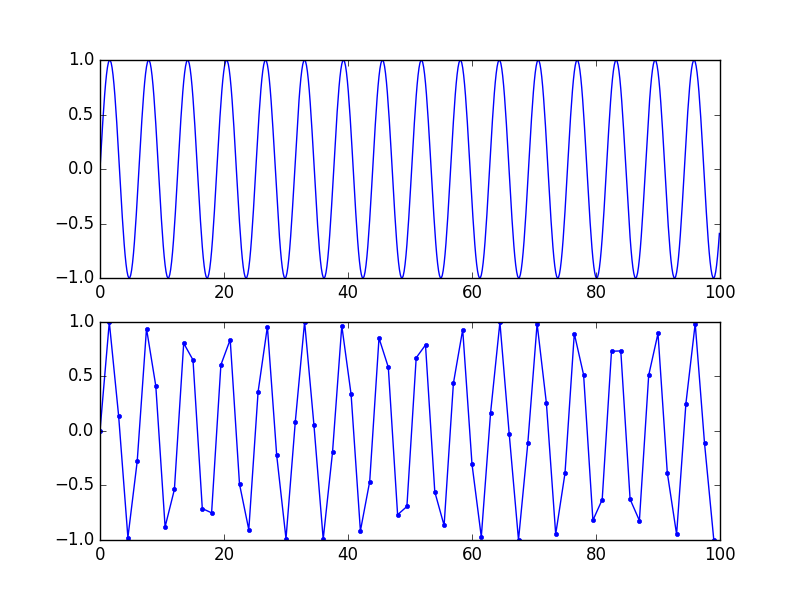 It's the exact same signal though. If you oversample (reconstruct) the one on the bottom with a sinc filter you'll get the one at the top.

Decimation (downsampling) will fold back all frequency components higher than the new Fs/2 into the signal. This is why we usually put a steep lowpass filter before the decimator. For example, to downsample from Fs=2000 Hz down to Fs=30 Hz, first we would apply a high order lowpass with a cutoff a bit below 15 hz and only then decimate.

However this filter will introduce transient response issues, it will have phase lag at certain frequencies, and it may change the visual aspect of your signal, which you don't want to do if the idea is to visually compare them. The rule above applies, don't downsample too much, always keep Fs as 5-10x the highest frequency of interest if you want the signal shape to mean something. This is why a 200MHz scope needs to sample at 1-2 Gsps.

As said above, the wisest is to not mess with the data at all and simply present them each with their own x-axis on the same graph.

Sampling rate conversion would be required in some cases. For example to reduce the number of points, reduce memory use, make it faster... or to make both signals use the same "x" coordinates to perform calculations on them.

Mind the Nyquist criteria, and don't pick a too low sample rate or you will lose waveform shape fidelity on the high Fs signal, you'll get phase shifts because of the lowpass filter, etc. Or if you know the high frequency content is negligible, you can make an informed choice. I

If you use linear interpolation to make the "x" coordinates match, remember it also needs a quite high Fs. Interpolation would work on the top signal in the plot above, it would not work on the one on the bottom. Same if you are interested in min, max and such.

And... note that oversampling/upsampling will also mess with the transient response, at least visually. For example if you oversample a step, you will get lots of ringing due to the sinc filter impulse response. This is because you get a bandlimited signal, and a nice step with square corners actually has infinite bandwidth.

This is simply the visual representation of a bandlimited square wave. The wiggles kinda exist... or maybe not. There is no way to know if they were there in the original signal or not. In this case the solution would have been to acquire the original square wave with a higher sampling rate to get better resolution on the edge, ideally you want several samples on your edge so it no longer looks lits a step of infinte bandwidth. Then when oversampling such a signal, the result will not have visual artifacts.

Anyway. As you can see... just mess with the x axes. It's a lot simpler.

Which one you should use? It depends on the level of certainty you need.

If you don't need mathematical certainty and just want a heuristic, downsampling is faster and upsampling is more accurate.

If you need to put bounds on the accuracy of your computation: it is possible but I can't help you with that.

It depends on what you mean by "compare" and "wiser". The wise thing, which isn't hard in Matlab, is to do it both ways and decide for yourself.

Actually, if you amended your question with results from both approaches, I would upvote your question and more people would find it interesting, and most likely help in figuring out "compare"

I would like to point out a problem that takes place when doing upsampling that could be crucial in this operation. When a signal is upsampled and the data endpoints are far from zero values then the edge effect takes place. In practical experiences, this undesired effect should be eliminated. I share with this community a short essay with images and code I wrote about it that could help to understand.

4
Why does decimation make a system time variant?

12
What are the relative merits of various upsampling schemes?
1
Downsampling - upsampling FFTW
4
Downsampling oversampled image (smallest size which retains image 'detail' within acceptable limits)
0
Downsampling in MATLAB - why scaling filter coefficients?
2
How can I synchronize signal from an LED and TTL pulses better?
0
Downsampling issues
0
Apply filter before or after Downsampling?