I am working on a reverse engineering problem - I am trying to reconstruct a filter. 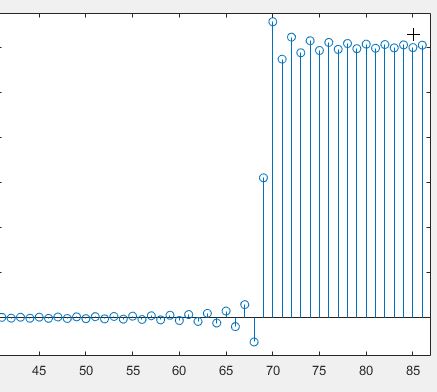 My main task is to repeat the behaviour of the system - convolving new signals with the obtained impulse response works - still - I would like to have a model of my filter.

I would like to synthesise a filter (FIR), which similar characteristics - with group delay around 68. (the filter should have more than decimation*68*2 taps)

I cannot obtain a filter which would guarantee this middle point. Could you recommend me a tool/approach? (currently, I'm using the MATLAB filter design tool)

EDIT. I would like to generate several filters and select the best filter. (more Bayesian approach)

Thank you in advance

from $h[n]$ you can compute the DFT (of a large finite segment of $h[n]$) and get the frequency response of this filter:

remember, with a finite delay allowed for the filter (this is your 68 samples), you can model both your impulse response $h[n]$ and step response $s[n]$ as symmetric about $n=0$ and define the origin for $n$ there at the 68th sample. doesn't matter if that makes the filter acausal. don't sweat that.