which filters are these?

Location of poles are given in unity circle and 4 zeros are given at origin for every plot,How to check which plot shows which filters?

For the Option (C) i am doing like this

I can write the Tranfer function from the plot like this

How can i conclude that which filters it should be ?

What should be the general procedure to do this?

When only a rough pole-zero plot (without exact locations of them) is given for a filter, then the only procedure that remains to evaluate the frequency response magnitude will rely on the geometrical analysis which I shall show here for the case of a single zero and pole:

In order to evaluate this magnitude geometrically, first treat the quantities as vectors on the complex-z plane, with real and imaginary parts making up their components.

For this single zero filter, it's obvious from the vector that its magnitude will be smallest when $\omega$ points along the angle of $\phi$ and it will be a maximum when the opposite.

An similar procedure follows with the care taken to divide the magnitudes of the zero vector and pole vector at each frquency to yield to magnitude of the Frequency response.

Consider the geometric (rough) evaluation of the frequency response magnitude of a filter whose $4$ poles are as given in the plot of case A. There will be $4$ vectors from those $4$ poles to the unit-circle for each frequency of evaluation. I'll show $4$ frequencies $\omega = 0, \phi, \pi/2 , \pi$ respectively where $\omega=\phi$ is a frequency verl close to the pole angle locations. These four angle (frequency) points will let us varify rougly the frequency response magnitude of the BPF.

Each 4 vectors will have the following colors: $v1$ blue, $v2$ red, $v3$ green and $v4$ orange. And then we shall evaluate the frequency response magnitude as:

for $\omega=0$ (DC response): All four vectors are similar and nonzero in length and hence their reciprocal,$|H(\omega)|$, will be a very small number. 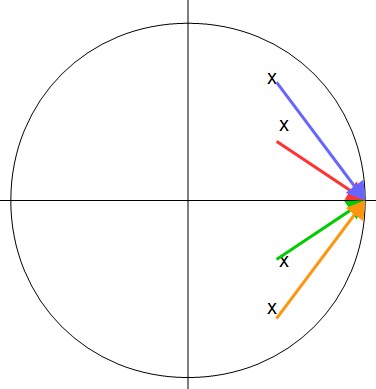 for $\omega=\phi$ (passband-response): Blue and Red vectors gets vanishingly small as $\omega \to \phi$ which means that their reciprocal, $|H(\omega)|$, will be very large at those frequencies justifying the bandpass charactheristics. 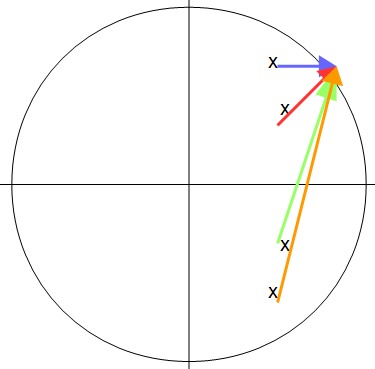 for $\omega=\pi/2$ (stob-band) similar to the DC case, none of the vectors gets small and all of them are nonzero large values (orange and green being larger) hence their reciprocal, $|H(\omega)|$, will be very small in line with the stop-band charactheristics. 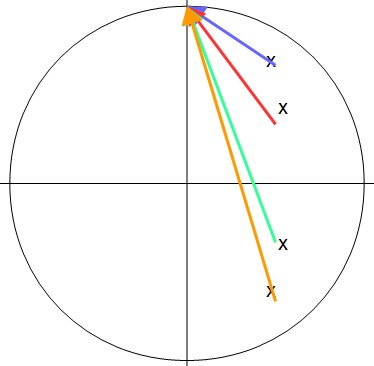 for $\omega = \pi$ (stop-band): similar to first and third cases this time all four vectors are attaining their largest values hence making their reciprocal, $|H(\omega)|$, as the smallest value justifying the BPF filter characteristics. 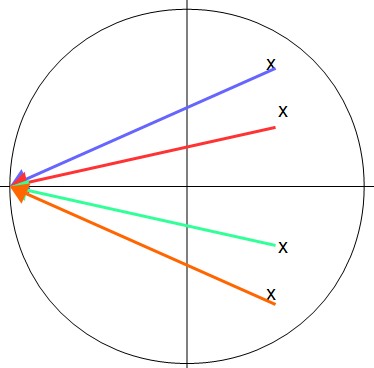 For example, using this visualization, your example in (A) shows the pole/zero plot of a band-pass filter whose TF has two maxima around $\approx f_\text{s}/8$. (B) and (C) show pole/zero plots of comb filters with negative and positive feedback, respectively.

As a consequence, if I understand correctly, the correct answer to the initial question would be (A).

Not the answer you're looking for? Browse other questions tagged filters homework self-study poles-zeros or ask your own question.

2
determining type of filter given its pole zero plot

0
Can all pass filers have a pole/zero at the origin of the root locus
3
Are all IIR filters unstable in nature?
5
Identifying the magnitude and impulse response from pole zero plot quickly
0
System characterization given pole-zero mapping
2
What's the Q of a pole at the origin of the s-plane?
6
Nyquist plot interpretation when curve hits the origin
3
Poles and zeros of a transfer function
5
Pole-zeros of a real-valued causal FIR system
1
Pole Zero plot given a Transfer function
2
Laplace Transform: zeros and corresponding impulse response $h(t)$