What is the meaning of this notation? 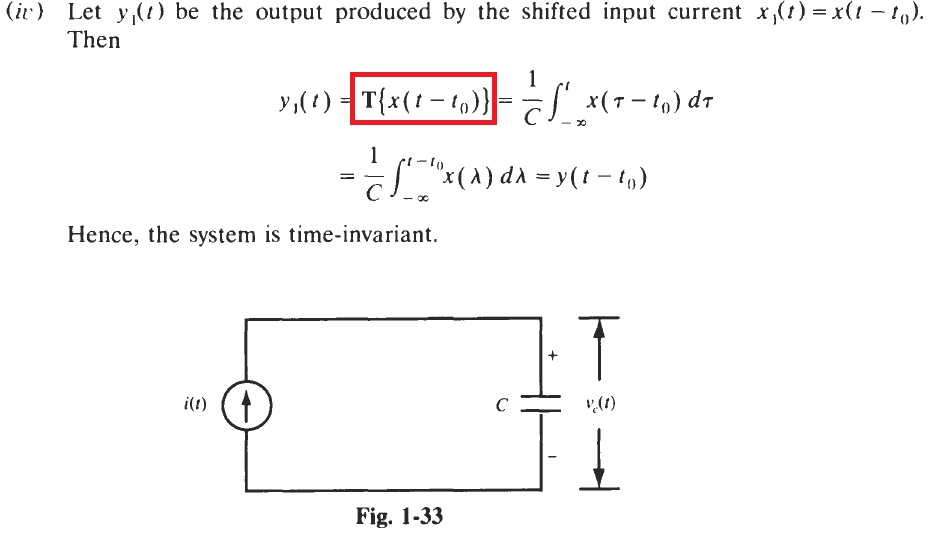 I have seen this notation in the book Schaums-Outline a couple of times now and I can't quite understand it. I'd very much appreciate if someone explained what it means. I am thinking that it means Transform, as in the input goes in the system and transforms? Thank you very much!

It just means "the transformation that turns $x$ into $y$."

Mathematically, an electrical circuit is as an operator, i.e., a function that takes a function and returns another function. Let this operator be denoted by $\mathcal T$, let $x : \mathbb R \to \mathbb R$ be the input signal and let $y := \mathcal T (x)$ be the output signal. Let $\mathcal D_{t_0}$ be the delay operator that delays its input by $t_0 > 0$.

Translating the equation on your book to this language, we obtain

Since the word did not appear in previous answers, I would suggest the meaning of "transfer" function. Systems theory is globally about relationship between inputs, outputs, and some process in-between, sometimes called an input–process–output (IPO) model:

The input–process–output (IPO) model, or input-process-output pattern, is a widely used approach in systems analysis ... resources, money or information, transformed into outputs, such as consumables, services, new information or money.

So the idea of a transform/transformation is at its core. More specifically in engineering, one sometimes uses the notion of transfer function:

In engineering, a transfer function (also known as system function or network function of an electronic or control system component, is a mathematical function giving the corresponding output value for each possible value of the input to the device

which I believe is appropriate too in your concept. See for instance SE How to interpret the notation of a transfer function. Aside, $T$ is a common notation for an integral transform:

Not the answer you're looking for? Browse other questions tagged math notation or ask your own question.

-1
How to interpret the notation of a transfer function

0
Derivative Notation as a factor
3
Mysterious notation used in “BLIT” CCRMA paper
1
What is this theorem in this formula?
1
Closed form expression for $\sum_{k=0}^{n} \alpha^{-k}$?
0
What would be the proper notation for denoting part of signal that satisfies a condition?
0
What does this notation $g(x) = S\{\delta(t) \}(x)$ mean?
1
Separation of signals without loss of information about the signals themselves
0
Understanding Communication Theory Jargon for Statistical Linear Models