Take the following transfer function of a 3rd order system:

and with the following unitary step response: 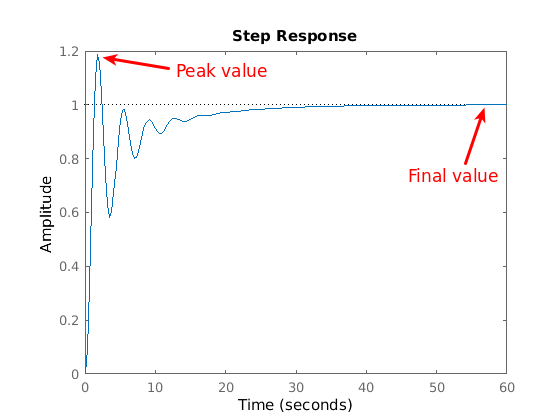 If I compute the percentage overshoot (PO) based on the damping ratio $\zeta=0.176$, I get:

However, if I compute the PO using the graphical method (comparing the peak value with the final value) I get a completely different result:

I don't understand why such discrepancy. Why are my PO computations not matching?

where $\gamma \in \mathbb R$ is the gain (or attenuation) and $z \in \mathbb R$ is a (finite) zero. However, the formula you used to calculate the step response overshoot is only applicable for 2nd order systems of the form

whose zeros are at infinity. To summarize, the overshoot is smaller than you expected because:

In any case, not neglecting the above would only provide one estimate of the overshoot. To compute a satisfactory approximation of its exact value, you can take the inverse Laplace transform, differentiate and find where the derivative vanishes.

Not the answer you're looking for? Browse other questions tagged continuous-signals linear-systems step-response or ask your own question.

2
Additive but not homogeneous continuous system?
1
Why is the total signal response response of zero input + zero state, $y(t) = y_0(t) + h(t)\star x(t)$, not an LTI?
0
Which of these features may not be needed or redundant?
2
Why cosine is not an eigen signal?
2
Is this system invertible or not?
3
whether the system is linear or not for the given problem
8
Initial conditions for systems described in state space - LTI or not?
2
Why $y[n] = x[-n]$ is not time-invariant?
7
Are all LTI systems invertible? If not, what is a good counterexample?