Find the impulse response of an LTI system? 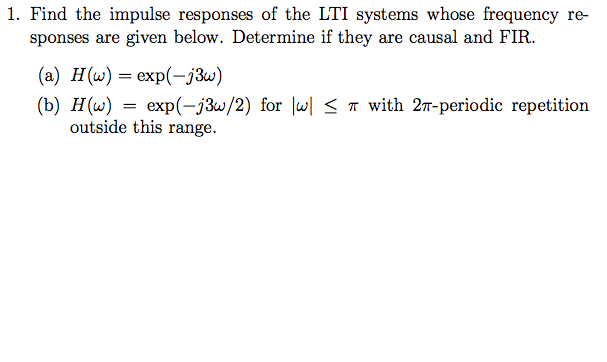 why there is a 3/2 in the (b) problem? Does the impulse response even exist?

The problem in case b-) is in the fact that it suggests a non-integer amount of shift $\alpha$ of the unit impulse $\delta[n]$ so as to obtain $\delta[n-\alpha]$ which would then have a corresponding frequency response $H_b(\omega) = e^{ -j \omega \alpha }$. But this makes no sense in the domain of discrete-time sequences which cannot be shifted by non-integer amounts which might force you to argue that the corresponding impulse response does not even exist.

The solution requires an investigation of the relation between continuous-time and discrete-time signals through sampling as the other answer outlines. Instead here I put a shorthand result.

Note that $h_b[n]$ cannot be obtained from $ \frac{ \sin(\pi n) }{\pi n}$ by just shifting it $3/2$ samples which is not possible. Therefore you should obtain the samples of the impulse response $h_b[n]$ by evaluating its formula for each n.

5
implication of sampling and reconstruction theorem