I've spent many hours reading and doing research about this. I don't attend any university classes or any type of classes that may approach such a topic. I am trying to learn this by my own without any help what so ever. So please understand if I say something inaccurate or if I'm asking an obvious question. I have been studying quadrature because I need it to develop in software defined radio platforms. The problem is that I have found a lot of contradictory information.

Now let's see an example. Have a look at this paper about QAM on ni. I read the paper and I understood it. The problem that is if you take a look at the baseband graph, the I and Q components are completely different. They shouldn't, right? They should be equal to each other apart from the 90º phase shift. At least that is what I understood after reading many papers and articles on the subject.

Now let's take a look to this article about IQ on tek. Having a look at the last two images, I can visualize what's happening. The I and Q are being transmitted and then received. I can see that the I and Q components transmitted are the same being received. What I don't understand is that Q isn't by any means equal to I with a 90º phase shift. That is what's supposed to happen right? Maybe not? I can't seem to understand it. I know that the I is obtained by multiplying the real signal by 2cos(w(c)t) and that Q is obtained by multiplying the real signal by -2sin(w(c)t). So, what I saw before clearly makes no sense.

Again, I'm sorry for my ignorance in the subject but I am doing my best trying to understand this. I'm just confused by this contradictions. Thanks in advance for anyone who tries to explain this to me, really.

You are mistaken in your 2nd paragraph. The I and Q components are not always identical with a 90 degree phase offset. Instead, they are usually generated by multiplying some real or complex signal with two sinusoids that offset by 90 degrees. Only if the input is a constant (e.g. carries zero information) does the IQ output fit your description.

A strictly real signal has no imaginary component. But when heterodyne modulated (complex multiplied) by a complex carrier (two higher frequency sinusoids, cosine and sine), the result is a complex IQ signal. If the baseband signal is not just strictly real, but complex, the result of that heterodyne modulation can produce completely independant and unrelated I and Q components in the IQ result.

When down-converting a higher frequency strictly real signal to baseband, again you will get identical I and Q with a 90 degree offset only for constant input. But if the real input is not constant, but varies over time, the complex multiplication result can produce very different I and Q component waveforms. This is because the local maxima of the cosine waveform and sine waveform occur at different points in time, and thus can be multiplied by different input values if the input is varying, thus producing in different result values, thus making the waveforms different, not just offset by 90 degrees.

Since QAM can carry information (e.g. not just a single constant value), the I and Q components can vary.

In terms of visualization, I think you may be confusing phase shift and delay. In the case of a single-frequency complex exponential , a plot of the imaginary part appears to be delayed from the real part by T/4, where T = 1/f. However, if you have a complex waveform which is the sum of two or more complex exponentials at different frequencies, the imaginary part of the signal will have a different shape and no longer look like a delayed version of the real part. This is due to the fact that the amount of delay required to generate 90 degrees of phase shift depends on frequency, so no single delay can generate the imaginary part for a group of different frequencies.

What you are talking about is a certain special case of a quadrature signal. You don't have to generate $Q$ like that. But let us assume that we do. Let us assume you have some signal

Let's call this a "quadrature harmonic" at 3 Hz.

Now, imagine what you would see if you connect this to an oscilloscope. Feed the the X-Axis with $I$ component and the Y-Axis with $Q$ component. Then, the dot would go around on a circle three times a second counter clockwise. Now, imagine what happens if replaced $3$ with $-3$ in the above formulas ... I'll tell you: We would change the polarity of $Q$. In this case, the dot would go around in a circle but clockwise instead of counter clockwise. This is a crucial observation! A quadrature signal allows you to distinguish between positive and negative frequencies!

With that understanding we can treat real-valued signals as just a special case of a quadrature signal with $Q=0$. To stay with the 3Hz example from above:

But sometimes, you don't want both of these sides of the spectrum. Sometimes you just want to keep the positive frequencies and filter out the negative ones. This is done by setting $Q$ as a 90° version of $I$ just like we did in the beginning.

In general, $I$ and $Q$ can be totally different. If you set both of them to independent white noise you'll have a broad spectrum that is not necessarily symmetric anymore, for example. And in the context of software-defined radio, capturing an FM signal as I/Q signal will result in a single quadrature harmonic that changes its frequency over time. If the radio station sent out a frequency of 100.32 MHz and your SDR tuner was set to 100.31 MHz, you'll get a quadrature harmonic at 100.32 - 100.31 = +0.01 MHz. If you increased the tuner frequency to 100.33 MHz, you would observe a negative quadrature frequency (-0.01 MHz). In the context of QAM, the spectrum won't be symmetric either.

I will try answering it using math expressions, hopefully that'll make it clearer. Like hotpaw2 said, usually the whole point of IQ modulation is to be able to transmit two independent or different message signals in the same transmitted (or passband, or upconverted) signal.

Consider the normal upconverted signal: $$(m(t))cos(2{\pi}{f_c}t)$$ where, of course $m(t)$ is real. In this scheme, you can transmit only one message signal $m(t)$, right? Since $m(t)$ is real, it's FT (magnitude spectrum) will look something like this: 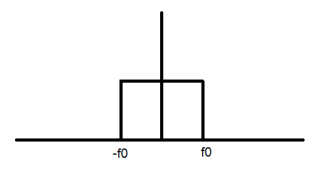 (I'm not talking of the shape of the spectrum, but just the fact that it'll be symmetric w.r.t $y$-axis - that's a property of Fourier transforms - FT of real signals have a $y$-symmetric magnitude spectrum (refer Signals and Systems by Alan V. Oppenheim for more on FT and its properties):

Now after upconversion (i.e. multiplication with $cos(2\pi{f_c}t)$), it will have the following FT (magnitude specturm):

Now, IQ modulation. In this case, consider having a complex message signal of the form $m(t) = m_I(t)+jm_Q(t)$ where you know what I and Q stand for. This should already hint you that we are transmitting two independent (different) signals - $m_I(t)$ and $m_Q(t)$. This would have the following FT magnitude spectrum. (Again, not the shape - just a y-asymmetric magnitude spectrum): 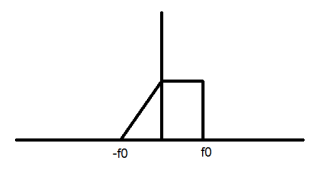 For completeness, FT (magnitude spectrum) of the complex passband signal will look like this:

And, once you take the real part, your final IQ modulated signal would have this FT (magnitude spectrum):

Not the answer you're looking for? Browse other questions tagged digital-communications modulation quadrature radio software-defined-radio or ask your own question.

2
What is the meaning of BPSK(n)
1
Why is no phase information lost when a received signal goes through a mixer?
0
Are IQ-samples independent from the carrier frequency?
2
How to test I/Q modulation with only one branch (I or Q)?
0
What is matched filter in QPSK signal?
1
Use of I/Q representation for unmodulated Rx Signal
0
I/Q sampling with just one ADC