MPEG Layer I: use of scalefactor and quantizers

I'm studying MPEG compression on the book "Introduction to Data Compression" by Khalid Sayood. In the figure there is a paragraph piece about the subject. 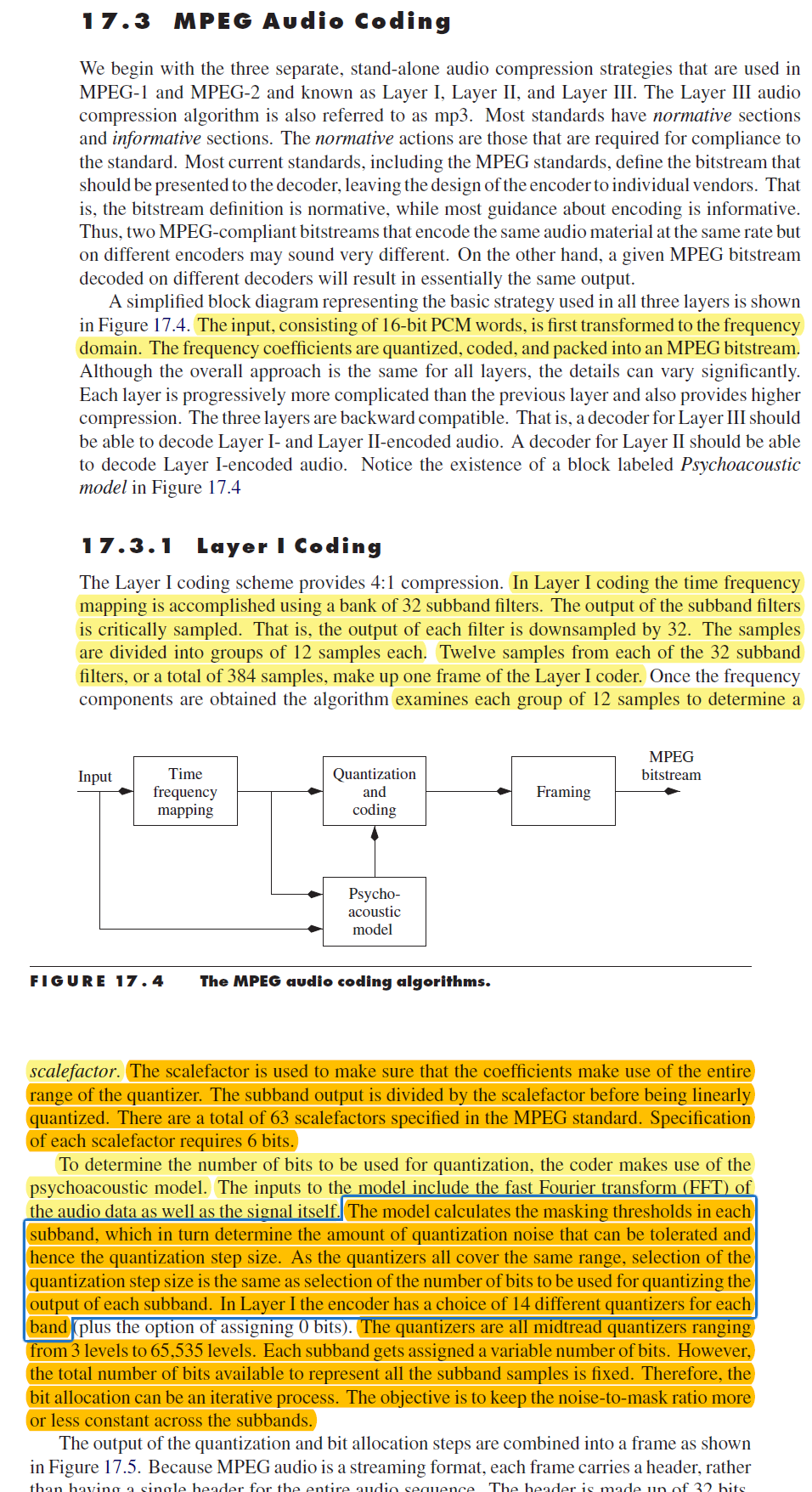 I didn't understand a few things:

That are the parts highlighted in orange.

The scalefactor is a value that is used to decrease (or increase) the range of values, right?

I try to repeat what I understand:

I know that point 5 is very superficial because I didn't understand the parts related to the scalefactor and the 14 different quantizers. Can anyone help me?

That's what I understand. Why does the book mention 14 quantizers? 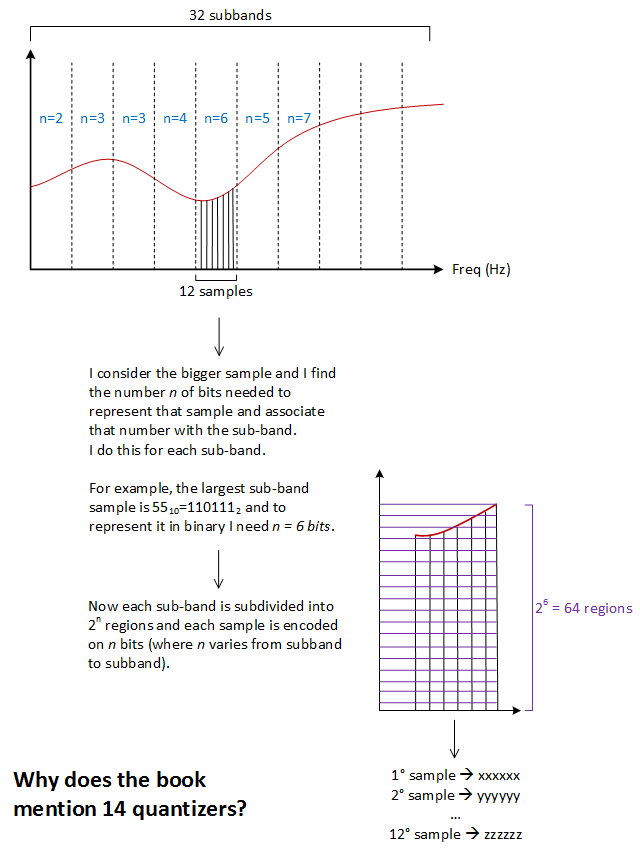 I read (quickly) the book you've been advising me (Introduction to Digital Audio Coding and Standards from Bosi). This is a piece that treats the part I didn't understand. 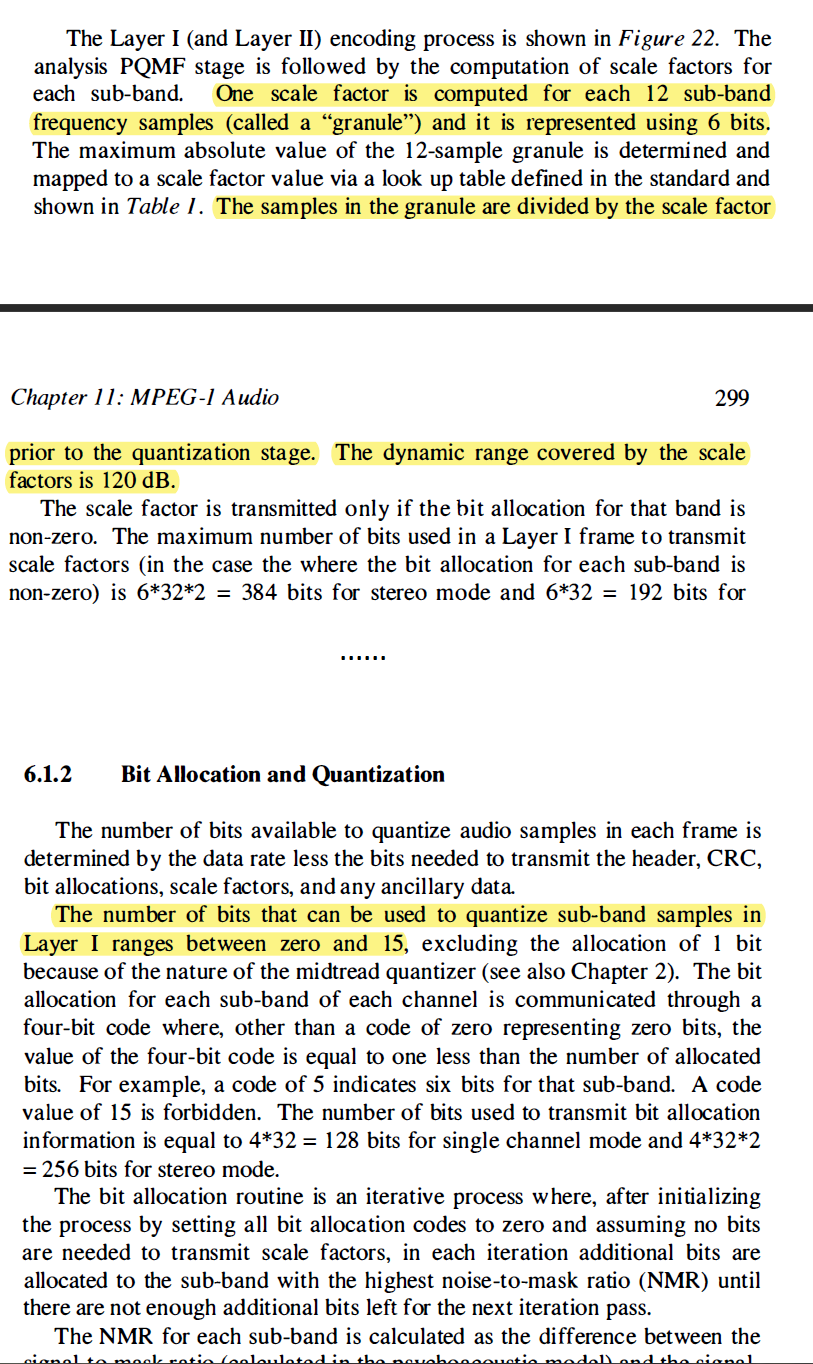 For each sub-band, the scalefactor (stored on 6 bits) is calculated from the 63 available and a quantizer (on 4 bits) of the 14 available.

The scalefactor is the largest sample of a sub-band. Once I've calculated it I use to divide each sample, obtaining 12 samples whose value is in the range [0, 1].

The quantizer has a numeric value that expresses the number of bits I use to encode each sample.

This is my usual scheming:

Why do I need to normalized the samples?

Let's get back to the official MPEG standard document and avoid your confusing literature for a moment!

So, you get audio as time samples. You use a very specifically crafted 32-band filterbank, which takes these input sample stream and generates 32 sample streams of each 1/32 of the original rate (that's the "time/frequency mapping" in that diagram you show, and the QMF in this diagram). All these streams are time-domain!¹

Now, you take a frame – that is, 12 "parallel" samples from each of these 32 streams. The codec's job is to figure out how "important" they are, and only use as much bits as needed to represent these.

The "importance" step is done by the psychoacoustic model (which might do arbitrary complex things, but that's not the point of discussion here), which will give us some info of the type "use $n_0$ bits for the first subband, $n_1$ for the second,…".

The Quantizer's job is now to take the 12 bits of "its" subband and save them with the $n$ bits depth it got. That's pretty straightforward. You just take the highest value in your 12 samples, scale it so that it is $2^n$, scale the other 11 samples as well, round them to integers, and save the scalefactor for later reconstruction.

You do that to all 32 subbands, and send the resulting streams of bits together with the scalefactors as the data part of an MPEG 1 Layer I frame.

At the decoder, you multiply with 1/scalefactor, then you transform the 32 subbands back into a single time signal.

Your confusion stems from the fact that you took the intro to that chapter as a kind of "step before" encoding happens, whereas it just was a slightly misleading (and claiming the samples were transformed to frequency domain) overview.

Also, the author of your book is wrong about the usage of the FFT in MPEG 1.

Be very precise about what you're exactly considering. We're here talking about MPEG 1 Layer I, not Layer III. In layer III ("MP3"), there's a kind-of-a-frequency-domain-transform happening on the subband samples (a modified Discrete Cosine Transform). That might have contributed to confusion.

¹ the "frequency mapping" is actually the mapping of signals to the frequency-disjunkt subbands. There's a bit of a mathematical caveat to that – the QMF filterbank is pretty close to being a wavelet transform, but I really wouldn't call it a time-frequency transformation. The original standard wouldn't want to do that, either, so they intentionally used the word "mapping". By the way, you'll find more info in the standard, which you can find by following the picture source that the author of your list (presumably) has in its table of figures.
Share
Improve this answer
answered Sep 9 '17 at 9:03

Not the answer you're looking for? Browse other questions tagged audio compression or ask your own question.