What is the physical significance of negative frequencies?

This has been one of the holes in my cheddar cheese block of understanding DSP, so what is the physical interpretation of having a negative frequency?

If you have a physical tone at some frequency and it is DFT'd, you get a result in both the positive and negative frequencies - why and how does this occur? What does it mean?

Edit: Oct 18th 2011. I have provided my own answer, but expanded the question to include the roots of why negative frequencies MUST exist.

Negative frequency doesn't make much sense for sinusoids, but the Fourier transform doesn't break up a signal into sinusoids, it breaks it up into complex exponentials (also called "complex sinusoids" or "cisoids"):

These are actually spirals, spinning around in the complex plane:

Spirals can be either left-handed or right-handed (rotating clockwise or counterclockwise), which is where the concept of negative frequency comes from. You can also think of it as the phase angle going forward or backward in time.

In the case of real signals, there are always two equal-amplitude complex exponentials, rotating in opposite directions, so that their real parts combine and imaginary parts cancel out, leaving only a real sinusoid as the result. This is why the spectrum of a sine wave always has 2 spikes, one positive frequency and one negative. Depending on the phase of the two spirals, they could cancel out, leaving a purely real sine wave, or a real cosine wave, or a purely imaginary sine wave, etc.

The negative and positive frequency components are both necessary to produce the real signal, but if you already know that it's a real signal, the other side of the spectrum doesn't provide any extra information, so it's often hand-waved and ignored. For the general case of complex signals, you need to know both sides of the frequency spectrum.

You can see that it has two frequencies: a positive one at $\omega_0$ and a negative one at $-\omega_0$ by definition! The complex sinusoid of $ae^{\jmath \omega_0 t}$ is widely used because it is incredibly useful in simplifying our mathematical calculations. However, it has only one frequency and a real sinusoid actually has two.

Currently, my viewpoint (it is subject to change) is the following

The definition of frequency as provided on wiki is: "Frequency is the number of occurrences of a repeating event per unit time"

If sticking to this definition negative frequency does not make sense and therefore has no physical interpretation. However, this definition of frequency is not thorough for complex exponential repetition which can also have direction.

Negative frequencies are used all the time when doing signal or system analysis. The fundamental reason for this being the Euler formula $$e^{j\omega n} = \cos( \omega n) + j\, \sin(\omega n)$$ and the fact that complex exponentials are eigenfunctions of LTI systems.

However, this is equivalent to

The ONLY reason why you would consider complex signals, complex Fourier Transforms and phasor math at this point is mathematically convenience. You could do it just as well with entirely real math, it would just be a lot harder.

There are different types of time/frequency transforms. The Fourier Transform uses a complex exponential as its basis function and applied to a single real-valued sine wave happens to produces a two valued results which is interpreted as positive and negative frequency. There are other transforms (like the Discrete Cosine Transform) which would not produce any negative frequencies at all. Again, it’s a matter of mathematical convenience; the Fourier Transform is often the quickest and most efficient way to solve a specific problem.

You should study the Fourier transform or series to understand the negative frequency. Indeed Fourier showed that we can show all of waves using some sinusoids. Each sinusoid can be shown with two peaks at the frequency of this wave one in positive side and one in negative. So the theoretical reason is clear. But for the physical reason, I always see that people say negative frequency has just mathematical meaning. But I guess a physical interpretation that I'm not pretty sure; When you study the circular motion as the principal of discussions about the waves, the direction of speed of the movement on the half-circle is inverse of the another half. This can be the reason why we have two peaks in both sides of the frequency domain for each sine wave.

What is the meaning of negative distance? One possibility is that it's for continuity, so you don't have to flip planet Earth upside down every time you walk across the equator, and want to plot your position North with a continuous 1st derivative.

Same with frequency, when one might do such things as FM modulation with a modulation wider than the carrier frequency. How would you plot that?

An easy way of thinking about the problem is to imaging a standing wave. The standing wave (in time domain) can be represented as a sum of two oppositely moving traveling waves (in frequency domain with positive and negative k vector, or +w and -w which is equivalent). Here comes the answer on why you have two frequency components in the FFT. FFT is basically a sum (convolution) of many of such oppositely traveling waves that represent your function in time domain.

So lets see for

lets first produce a complex sinusoids and plot it: 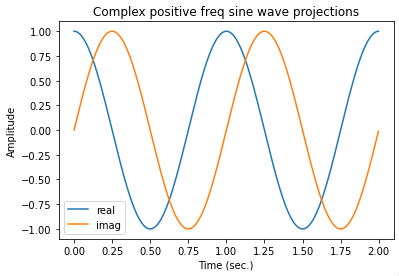 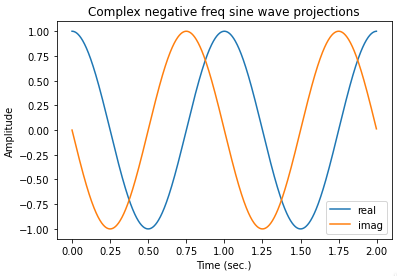 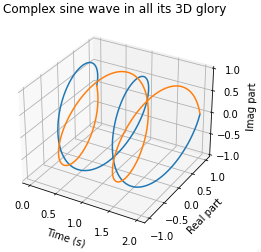 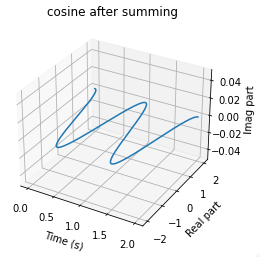 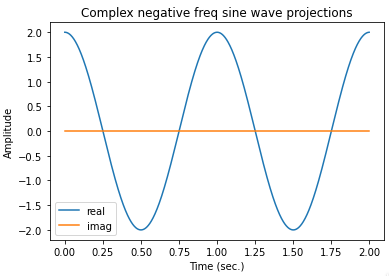 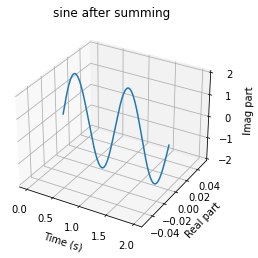 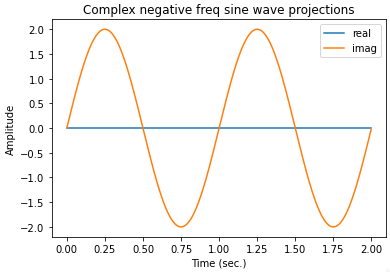 Used to be to get the right answer for power you had to double the answer. But if you integrate from minus infinity to plus infinity you get the right answer without the arbitrary double. So they said there must be negative frequecies. But no one has ever really found them. They are therefore imaginary or at least from a physical point of view unexplained.

This has turned out to be quite the hot topic.

After reading the rich multitude of good and diverse opinions and interpretations and letting the issue simmer in my head for sometime, I believe I have a physical interpretation of the phenomenon of negative frequencies. And I believe the key interpretation here is that fourier is blind to time. Expaning on this further:

There has been a lot of talk about the 'direction' of the frequency, and thus how it can be +ve or -ve. While the overarching insights of the authors saying this is not lost, this statement is nontheless inconsistent with the definition of temporal frequency, so first we must define our terms very carefully. For example:

Thus by the same tokens,

Now all the sudden we are in the business of measuring number of rotations per unit time, (a vector quantity that can have direction), VS just the number of repititions of some physical oscillation.

Thus when we are asking about the physical interpretation of negative frequencies, we are also implicitly asking about how the scalar and very real measures of number of oscillations per unit time of some physical phenomenon like waves on a beach, sinusoidal AC current over a wire, map to this angular-frequency that now all the sudden happens to have direction, either clockwise or counterclockwise.

From here, to arrive at a physical interpretation of negative frequencies two facts need to be heeded. The first one is that as Fourier pointed out, an oscillatory real tone with scalar temporal frequency, f, can be constructed by adding two oscillatory complex tones, with vector angular frequencies, +w and -w together.

Keeping this in mind and taking a quick diversion to recall that temporal frequency is the first derivative of phase with respect to time, (simply the change of phase over time), everything begins to fall into place:

The physical interpretation of negative frequencies is as follows:

My first realization was that fourier is time-agnostic. That is, if you think about it, there is nothing in fourier analysis or the transform itself that can tell you what the 'direction' of time is. Now, imagine a physically oscillating system (ie a real sinusoid from say, a current over a wire) that is oscillating at some scalar temporal-frequency, f.

Imagine 'looking' down this wave, in the forwards direction of time as it progresses. Now imagine calculating its difference in phase at every point in time you progress further. This will give you your scalar temporal frequency, and your frquency is positive. So far so good.

But wait a minute - if fourier is blind to time, then why should it only consider your wave in the 'forward' time direction? There is nothing special about that direction in time. Thus by symmetry, the other direction of time must also be considered. Thus now imagine 'looking' up at the same wave, (ie, backwards in time), and also performing the same delta-phase calculation. Since time is going backwards now, and your frequency is change-of-phase/(negative time), your frequency will now be negative!

So how does fourier capture this? Well, in order to show the direction of time, a rotation of some sort must be employed such that a clockwise roation dealinates 'looking' at the signal in the forward arrow of time, and a counterclockwise roation dealinates 'looking' at the signal as if time was going backwards. The scalar temporal frequency we are all familiar with should now be equal to the (scaled) absolute value of our vector angular frequency. But how can a point signifying the displacement of a sinusoid wave arrive at its starting point after one cycle yet simultaneously rotate around a circle and maintain a manifestation of the temporal frequency it signifies? Only if the major axes of that circle are composed of measuring displacement of this point relative to the original sinusoid, and a sinusoid off by 90 degrees. (This is exactly how fourier gets his sine and cosine bases the you project against every time you perform a DFT!). And finally, how do we keep those axes seperate? The 'j' guarantees that the magnitude on each axis is always independant of the magnitude on the other, since real and imaginary numbers cannot be added to yield a new number in either domain. (But this is just a side note).

As our universe has shown before, it is precisely because Fourier does not know the direction of time, that both sides of the DFT must be symmetric, and why the existence of negative frequencies are necessary and in fact very real indeed.

Not the answer you're looking for? Browse other questions tagged frequency or ask your own question.

1
Negative frequency in the Fourier Transform
0
What is the significance of the two-sided representation of a spectrum (frequency vs amplitude) when talking about analyzing a signal?
47
Why is the FFT "mirrored"?
2
What does the exponential term in the Fourier transform mean?
10
Image processing and the Fourier Transform
10
How do you handle negative frequencies in the power spectrum of a complex signal?
4
What is a complex helical sequence?
4
Understanding FFT of an Image
4
DFT of real sinusoids - why sum over -$N/2$ to $N/2-1$ as opposed to $0$ to $N-1$?
0
Does negative frequency actually exist or it is just theoretical?
See more linked questions