Convolution by differentiation property of convolution

This is the question

when i am trying to do it by the deravative property of convolution https://en.wikipedia.org/wiki/Convolution#Differentiation like this 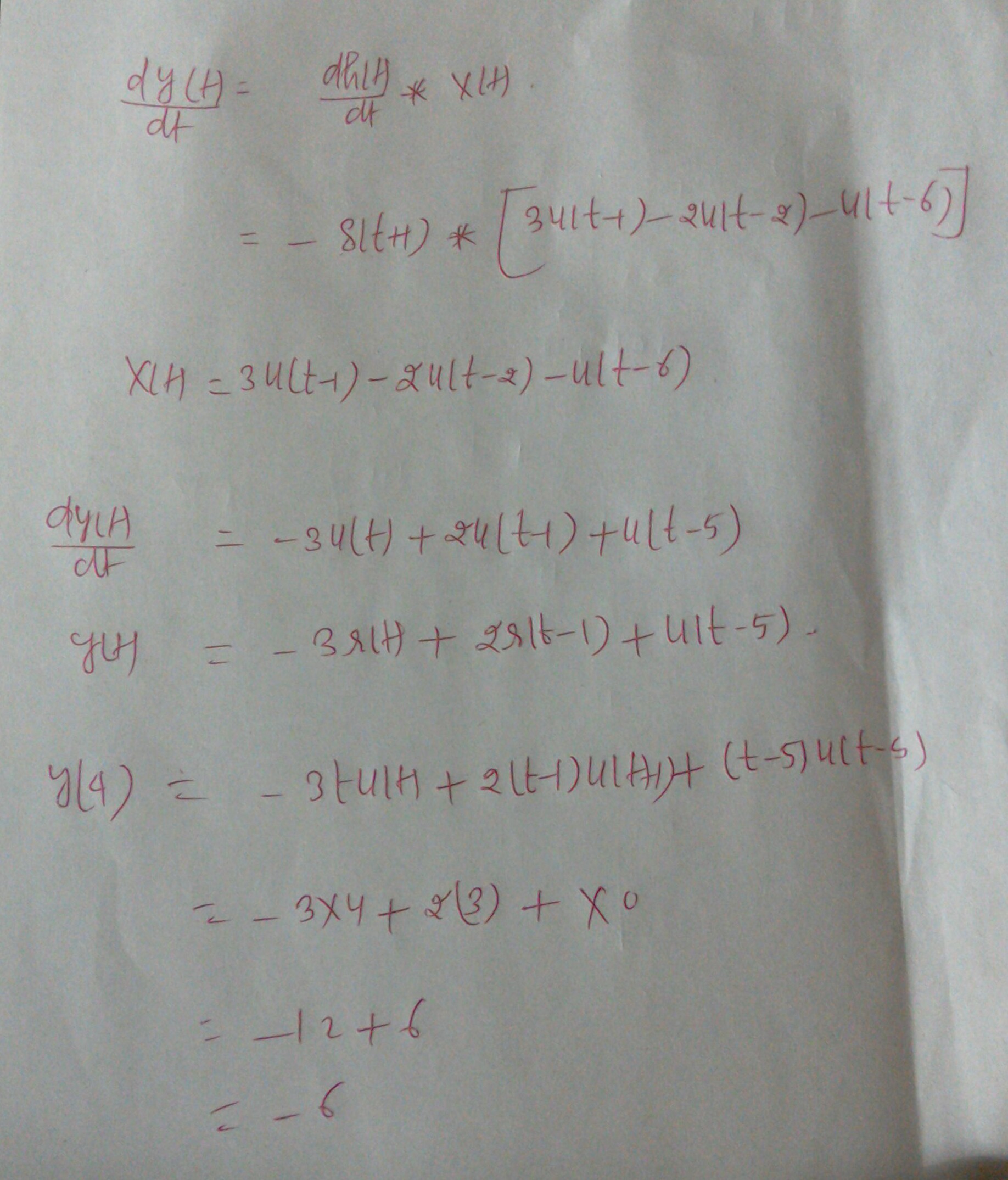 P.S:- Please dont give me alternative method to solve this i know it already instead tell me whats wrong i am doing in this method also i know i am violating the policy by putting the image but i will edit it lator in text form .

First of all let me state that, the property of differentiation under (convolution) integral operator may not be holding true for arbitrary signals but only for some subclass, such as absolutely integrable ones. That's stated in the wikipedia link OP provides about convolution. All I can make sense from that statement is that interchange of differentiation and integration is only possible if the integral is convergent. That's formal mathematics and I'm not very sure whether that applies to generalized functions, such as $u(t)$ and $\delta(t)$ as well. So I'll leave the discussion to mathematicians for a moment and proceed with the solution, treating the functions as if they're well behaving.

the left side evaluates as;

Now here I shall make a few simple comments. As below we argue with @msm whether this is a definite integral or an indefinite one? He seems to claim it as an idefinite one with constant of integration at the output. (I don't actually know it because he doesn't put his equation there inspite of all my attempts, also he seems(?) to delete that comment as well? Rather he says it's simple to see. I don't know. It's always better to make it clear when requested to avoid any confusion. Of course this is a definite integral with clear limits on it, hence at the output you won't have a constant of integration whatsoever. The integrand is antiderivatived, and evaluated at the limits and subtracted so that the constant of integration is cancelled. What remains there as $y(-\infty)$ the integrand evaluated at the limits. For causal systems and signals applied, $y(-\infty)$ is by defintion zero, hence it's ignored, but when you have a noncausal system (like in the example system with $h(t) = u(-t-1)$ you may not ignore it and hence the term $y(-\infty)$ remains.

Where we have indeed antiderivated each integrand and subtracted their evaluation at $\tau=t$ and $\tau=0$, the latter one all providing $0$

Below you can see the verification by direct evaluation of the colvolution integral.

(EDIT: see the first paragraph to get the point) As warned by the OP, that the differentiation property under the convolution is not valid for the signal $h(t) = u(-t-1)$, so we then resort to direct evaluation to check the answer.

The graphical method provides the easiest evaluation of this integral for particular output value of $t=4$ as:

So the requested value is: $y(4) = 1$ , hence you are right the answer is $y(4) = 1$ and (EDIT: see the first paragraph to get the point) [it seems the differentiation property is not applicable for arbitrary signals but those which are absolutely integrable.]

Sorry for the confusion...

Not the answer you're looking for? Browse other questions tagged convolution continuous-signals homework or ask your own question.

2
Why cosine is not an eigen signal?

7
Fourier series representation
1
Decoding Matrix Encoded Surround Sound Through Convolution
2
How can I calculate the cyclic (periodic) convolution?
0
understanding discrete-time convolution in LTI systems
0
Convolution by IIR filter, a case where circular convolution is allowed?
5
Convolution of Two Kernels [OpenCV]
2
how to evaluate derivative of convolution integral?
1
When to Apply Circular Convolution Formulas?
1
Even and odd signals