Is there a special case in which wave atoms convert to curvelets?

I'm new to multi scale transformations. I was wondering if there is a special case where wave atom converts to curvelet transform? Can I use wave atom parameters to have curvelet properties?

In their 2007 paper, Wave atoms and sparsity of oscillatory patterns, Demanet and Ying draw connections between wave atoms and other types of wavelets: 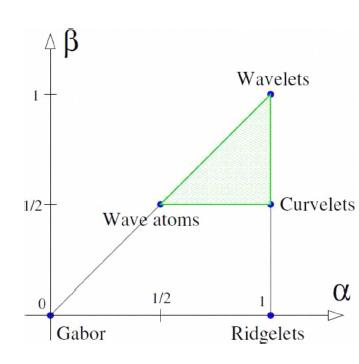 with a better spatial localization, meant for texture analysis. Their choice ($\alpha=\beta=1/2$) was a compromise between two types of sparsification (preservation under warping, sparsity of oscillations). Yet, one could built different collections of such wave packets, with alternative choices of $\alpha$ and $\beta$, bridging the gap between the different transform choices.

Yet, their natural redundancy is 2, with an orthonormal variant, and a complex one with redundancy 4, different from that of the curvelets. So I do no think they can be used as a special case of curvelets.

A tutorial on 2D geometric transformation can be obtain in A Panorama on Multiscale Geometric Representations, Intertwining Spatial, Directional and Frequency Selectivity, 2011.

Not the answer you're looking for? Browse other questions tagged transform wave or ask your own question.