I apologies if this is off topic for this site, but I am trying to figure out (and not having much luck) how to get an empirical distribution function of a sum of two random variables given two samples of equal length (say 256) from their respective distributions. I understand that the distribution is given by a convolutions of their distributions, which can be computed as a product of their characteristic functions.

Also, I am not sure if I am supposed to be doing zero-padding of the two original time series (say +256 zeros for each). I have read that if one wants to perform regular convolutions (instead of a "circular" one, whatever that is), one have to do this padding with zeros. This padding, however, seems to make the final result also double the length, but I would like to get the estimated distribution of the sum of the same length as the inputs, so not sure what needs to be done here.

For example, given two identical samples of size 9 from uniform distribution

their convolution would produce 81 pairs with values

which gives the triangular distribution. What I am looking to do, is to produce this without doing these convolution sums, but by using Fourier transform.

This is what Wikipedia says on the calculation of empirical characteristic function.

And this is what it says about application of the characteristic function to sums of random variables.

A discreet Fourier transform (DFT) of a sequence is

I still think you're completely confused about what you're trying to do, so I'm going to go back and assume your question is:

and try to answer that.

Finding the PDF of $x_n$

Finding the empirical PDF of a data sequence is a little tricky. The most straightforward way is to find the histogram of the data and normalize it so that it sums to 1.

It's not Excel, but this Google Sheet shows how that can be achieved.

The same approach can be used for finding the PDF of $y$.

As you say, the PDF of the sum is the convolution of the two individual PDFs (provided $x_n$ and $y_n$ are independent). See section 7.2 here.

Unfortunately, Google Sheets doesn't have an FFT function, but you could do it element by element, which is what I've tried to show in the columns:

The resulting graph is an estimate of the PDF of the sum, which approximates the expected triangle function quite well. 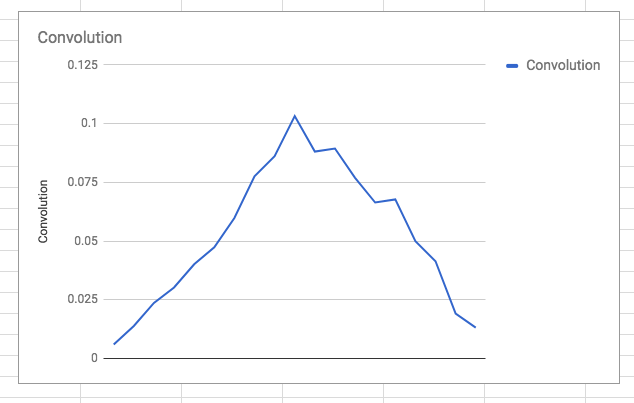 How to do better?

Also, as you say, a better way to do convolution may be to use the FFT. To avoid "time aliasing" you need to zero-pad your signals (PDFs in this case) to be at least $N+M-1$ long (where one signal is length $N$ and the other $M$).

3
How to determine, calculate and plot a probability distribution for a given set of numbers?
2
Fourier Transform of Kernel Density Estimation - Convolution Theorem?
0
Convolution and Deconvolution in C

7
How to compute the main lobe width of generalized Hamming windows (i.e. Hann, Hamming, etc.)?
3
How to "scale" the FFT when using it to calculate discrete convolution?
2
How to calculate a delay between two signals in frequency domain?
1
Aliasing when interpolating with DFT?
3
Power Spectral Density (PSD) from autocorrelation
3
How to get DFT spectral leakage from convolution theorem?