What does it mean that one frequency aliases another?

So I was watching a video on sampling and the professor asked which frequencies will alias to 0 and which to $B$ if we are sampling at frequency $f_{s1}$. What does mean that two frequencies alias each other ?

Could anyone explain this please? The image shows the frequency spectrum in question. 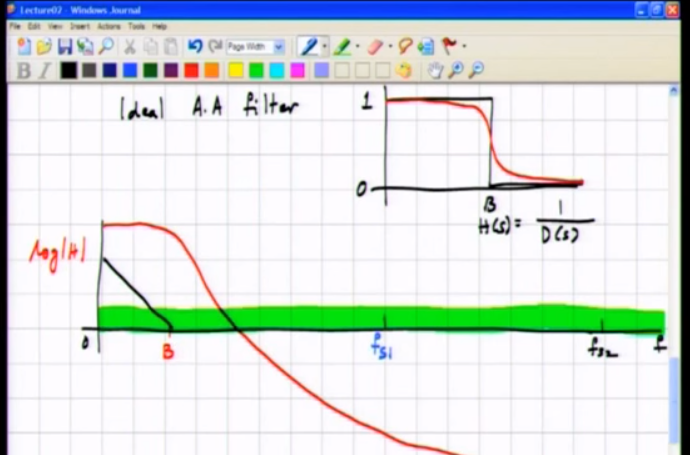 I assume that since you're watching lectures on sampling theory, then you have already grasped the core ideas of basic signal operations and Fourier transforms and signal spectrum plots.

It helps to think of not just "frequencies" but sinusoidal waveforms of certain specific frequencies.

Take two pure sinusoidal waveforms of any two different frequencies. If you plot them you will notice that they cross, thus have the same value, at a set of points at a sample rate in between the two sinewave frequencies. Thus, from just this set of sample points, you can't tell whether you were sampling the higher frequency sinewave, or the lower frequency sinewave, or a mix of both. Thus we call the two frequencies aliases. Because we can't tell the difference (from just those samples). One could disguise itself as the other.

Not the answer you're looking for? Browse other questions tagged sampling aliasing or ask your own question.

9
Alias frequency Formula
2
Sampling frequency of modulated signal
1
Designing an experiment to show blue noise not adding noise below nyquist and not aliasing above
0
What does the frequency band mean when it comes to finding aliases?
1
Calculate aliasing of $x_a(t) = \cos{(2\pi300t)} + \cos(2\pi600t)$ when sampled with $F_s = 1000$
4
Digital to analog aliasing or mirror query… DAC can output negative frequency?