Is it a correct way to calculate the Mean Square Displacement as function of time?

I would like to know if I calculate the MSD correctly, here is a Jupyter snippet I am using: 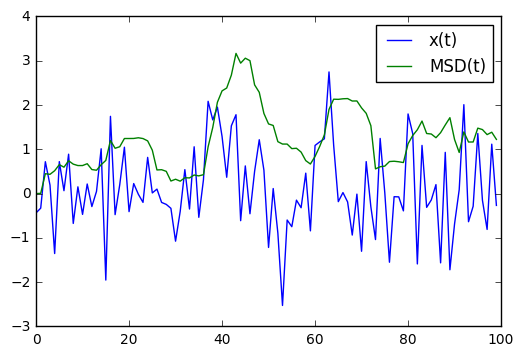 Is there a smart way to average over the variances? The original definition of MSD has average inside, but I don't relay averaging here because I have only one particle.

According to the article on which you base your MSD computation, it's specified as a single number (an average over N items) which is defined as the mean (average) of the sum of squared-distances between positions of $N$ particles at time $t$ and given reference positions $x_n(0)$ for each particle at a reference time.

Assuming that you want to compute MSD over a 1D particle displacement of $N$ items, you would use the following Matlab/Octave code to achieve it:

Assuming that you also want to plot MSD as a function of sampled time, you could then then use the following code to achieve it: