How does this FLL work?

I'm trying to get my head around how band-edge frequency locked loops work. In particular, a diagram from this paper: 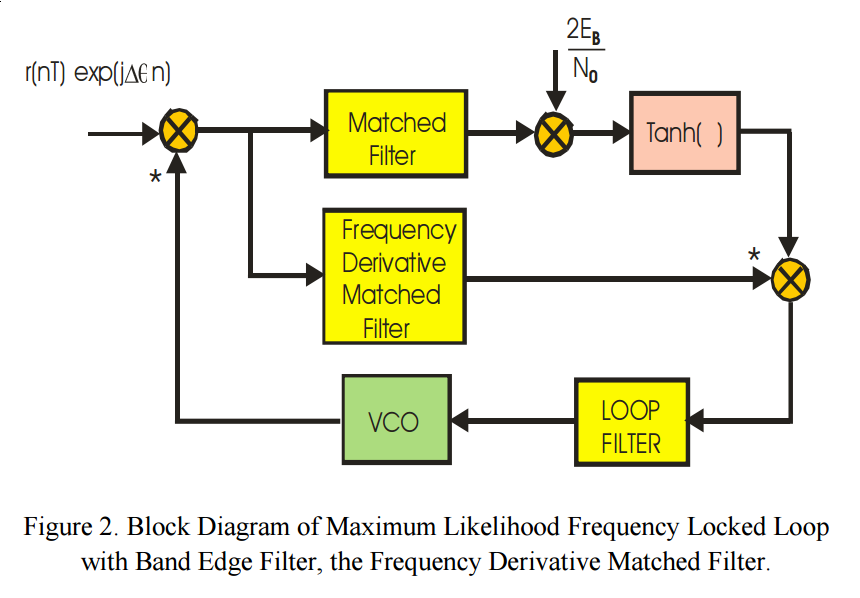 Specifically, what does the Tanh() function and the conjugate product of the two filters accomplish?

Explanations and references would be much appreciated.

The conjugate product of the two filters form a frequency discriminator with an error output that is proportional to a frequency offset at the input.

This is due to the relationship that the cross correlation in one domain is the conjugate product in the other domain (you can skip past the derivation unless interested):

From the shift property of the Fourier Transform, the terms inside the brackets are: 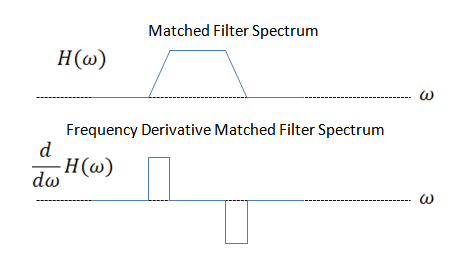 When there is no frequency error, the input spectrum would be aligned with both of these resulting in the following spectrums at the outputs of these filters. Notably, observe that convolving these two output spectrums will result in a zero result specifically due to the positive and negative balance in the Frequency Derivative Matched Filter Spectrum!

The above shows how the convolution of a Matched Filter Spectrum and a Frequency Derivative Matched Filter Spectrum results in an output value that is the error term for a frequency discriminator. Additionally we showed that convolution in frequency is equivalent to the complex conjugate multiplication in time. Thus the complex conjugate multiplication of the two filters in the block diagram form a frequency discriminator as the error signal into the loop.

The frequency discrimintor would operate as described without the scaling by the Signal to Noise Ratio (SNR) and Tanh() operation.

The additional scaling by the SNR, and the Tanh() operation are done to perform maximum likelihood frequency estimation (MLE). This shows the ideal implementation (in a maximum likelihood sense) but to my understanding the SNR scaling is rarely done in practice (but could be if an SNR estimation is performed as part of the receiver operation), and the Tanh() operation is typically approximated with a piecewise linear operation to be the signal for the small signal case when the signal is less than ±1 or limited to the sign of the signal (+1/-1) otherwise. So basically this path in the block diagram is hard limited for better performance with a limit that is dependent on the SNR of the received signal (a SNR dependent hard limiter is a typical operation within MLE implementations).

I believe that fred harris (fh) points out an advantage to this approach is how the derivative matched filter response is concentrated at the band edge where as we see through the convolution operation most of the information regarding frequency offset resides (when using a complex conjugate multiplier as a discriminator). The filter naturally blanks out the center portion of the spectrum which is not contributing further to the frequency error answer but would be contributing noise otherwise. Other advantages to this approach are that the symbol timing clock (timing recovery) can also be derived. I have not studied it personally in detail nor implemented this approach, but I believe fh makes the case that this implementation results in much lower pattern noise versus other carrier recovery (and timing recovery) approaches.

Not the answer you're looking for? Browse other questions tagged estimation or ask your own question.

0
What does it mean when one model fit the data better than does a comptitor model?
3
How to Pick a Journal for Publishing a Research Work?
4
Direct Correlation (DC) Time Delay Estimation: Variance Keeps Decreasing for Increasing SNR?
1
Why is the concept of a "state covariance matrix" necessary in estimation?
0
correlation matrix for complex white noise does not equal to identity matrix?
4
How to linearize this state space model and write it in discrete form?
7
Kalman Filter State Covariance Matrix for Non Constant Process Noise Matrix in PyKalman