I work with Magnetic Resonance Spectroscopy data. Data (complex signals) obtained from Bruker scanners (one of the biggest manufacturers of MRS scanners) start with an important group delay - around 60-80 points (in the time domain) - probably due to the fact that they use a long FIR filter. 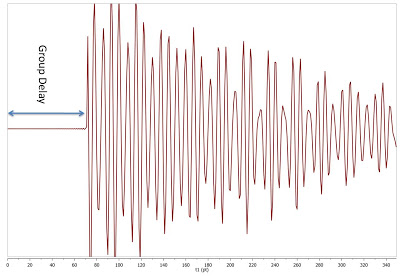 The effect of this group delay cumulated with some other (unfortunately unknown) problems results in a baseline distortion called Bruker smile/frown. (in the frequency domain, after FFT)

I would like to simulate this kind of distortion (smile or frown). I tried with a bandpass FIR of several taps (80- 140) and I cannot reach this effect. Could you recommend me any way of getting this distortion? Thank you in advance.

My guess is that somewhere in the processing you are using an AR (or ARMA) model that is being over / under fitted and that is what is causing the issue.

If I make a fake signal like this in R:

i.e. it's a noisy, delayed, damped sum of two sinusoids and then do AR modelling of the spectrum with different orders, then I get something like the smiles / frowns you are seeing.

An earlier attempt I made used a low-pass filtered version of the signal added to the same thing, modulated to $f_s/2$.

but that seemed way noisier than what you're after. 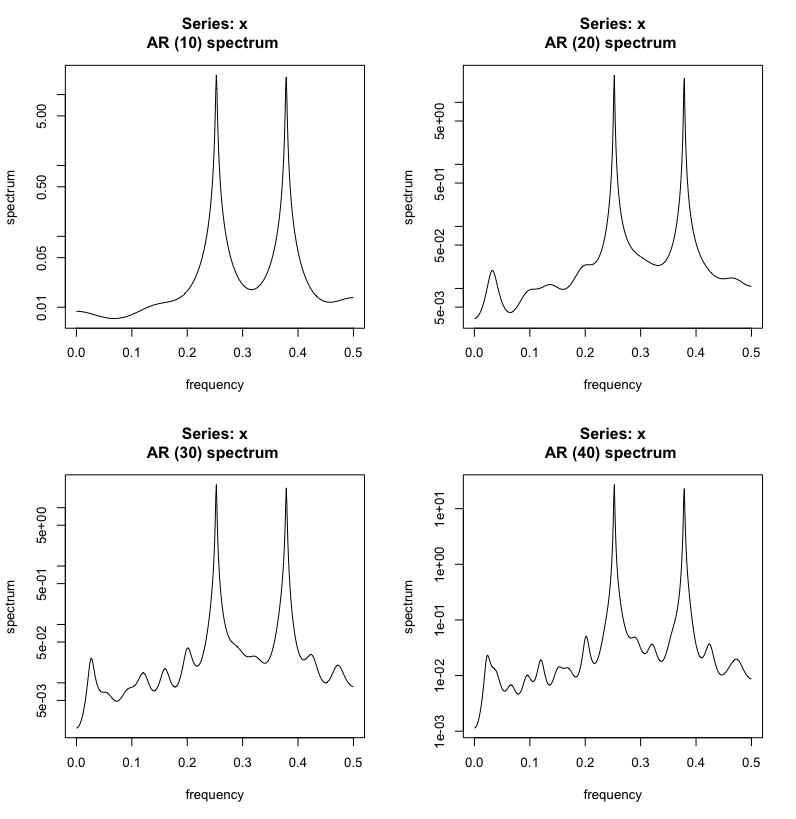 Not the answer you're looking for? Browse other questions tagged finite-impulse-response distortion or ask your own question.

2
FIR filter design and implementation - sample rate and number of taps
3
Digital modelling of circuits with diode (i.e. guitar distortion)
4
How to implement a FIR filter with correction of group delay on c#?
0
FIR filter reverse engineering from step response
2
How to compare many bandpass filters (for their signal propogation delay)?
0
Dithering adds harmonic distortion after filtering and upsampling
1
Linear vs Non linear distortion
1
Signal distortion under non-linear channel