Regarding phase and frequency components in the signal [closed]

As I am not a signal processing student, I have limited understanding of the concepts.

The general formula for sine wave is

where $A$ is amplitude $\omega$ is frequency and $p$ is phase.

I find it easier to understand the phase relationships by observing complex tones rather than sines and cosines, which are related using Euler's identity:

$e^{j\theta}$ is simply a phasor with magnitude 1 and angle $\theta$. If that angle is changing with time at a constant rate ($e^{j\omega t})$ the real portion will be a cosine and the imaginary portion will be a sine. If that phasor that is spinning at a constant rate does not start at magnitude = 1 and angle = 0 at time $t = 0$, then we have a phase offset ($e^{j\omega t + \phi})$ where $\phi$ here represents the starting phase at $t = 0$.

Thus a single impulse in the frequency domain is a single spinning phasor in the time domain as shown in the figure below. From that figure the I axis represents the real part of the spinning phasor, which would be a cosine wave, or a sine wave if the starting phase at $t=0$ was $\pi/2$ since $\cos(\theta+\pi/2)= \sin(\theta)$ 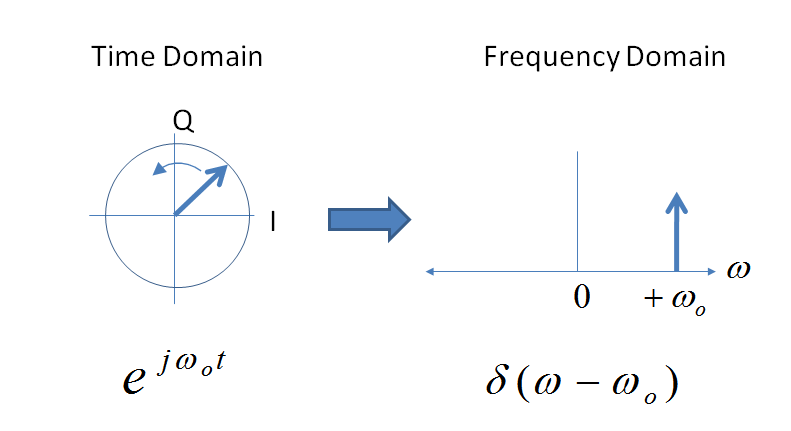 So to answer your questions with reference to the explanation above:

By definition of frequency being phase changing with time, the only signal that has a phase that remains constant is a DC signal. So if you stop the phasor from spinning (at any angle) this would be frequency = 0 (DC). You can have a constant phase offset for all frequencies, which is the phase you are referring to- this simply means at t=0 every frequency in your scenario has the same phase; but then as time proceeds each frequency would have a phase that would change at a different rate (the slope of the phase vs time IS the frequency!).

If we observe a real-time signal the signal can be a periodic sine wave signal but not smooth curve as it is accompanied by noise. In such cases how the phase of the signal is varied? Can the noise effect the phase of signal?

Yes of course it does effect the phase, and this is what is called "phase noise". Refer to the plot above of the spinning phasor in the time domain, and now imagine noise being added to it. The noise would appear as a random vector on the end of the phasor (proportional to how strong the noise is), and that vector would change randomly with time. Often this is shown as a round "noise cloud" that is on the end of the vector signifying its statistical distribution with time (but of course at any given instant the noise vector would be at one particular amplitude and phase). This noise cloud (If a complex Gaussian noise) would equally effect the amplitude and phase of the signal, causing both AM (amplitude modulation) and PM (phase modulation), what we would refer to as AM noise and Phase Noise.

Not the answer you're looking for? Browse other questions tagged discrete-signals frequency phase or ask your own question.

0
Phase of the chirp signal

3
time in Sine Wave equation
0
Time Period of one Cycle is way too large
0
How to process/generate a phase shifted frequency varying sine wave?
0
Phase reference of a periodic signal
17
What are advantages of having higher sampling rate of a signal?
2
Can the instantaneous frequency be always derived from an analytic signal?
0
Pointers for digital FM synthesis
0
How to take into account phase differences when doing Fourier Transform?