Relation between Bandwidth and Baud-Rate for 8-PSK

I have a query on relationship between Baud Rate and Bandwidth for 8-PSK.

But in many places is see the below statement ::::

How can this be possible.??

Your earlier figures suggest unfiltered waveforms and "bandwidth" definition to be the first main lobe of the resulting Sinc function spectral shape. Specifically, with a random data pattern, the spectrum for an unfiltered PSK waveform will be a sinc function with a null to null bandwidth from the first null that is twice the baud rate. (and power spectral density will be sinc squared). Perhaps this is the source of your confusion.

This also applies for all the same reasons for QAM which is shown in the figure below (I happen to have figures for QAM that help demonstrate this), and when you see and understand the additional explanation below you will know how it can be applied to determine the bandwidth of other modulated waveform. The figure below shows a QAM waveform versus time (the real portion of the waveform) as an unfiltered waveform in blue versus what it would look like with raised cosine pulse shaping in red, and the resulting spectrum for each case is shown directly below that. This waveform was modulated with a baud rate of 1 MS/s. 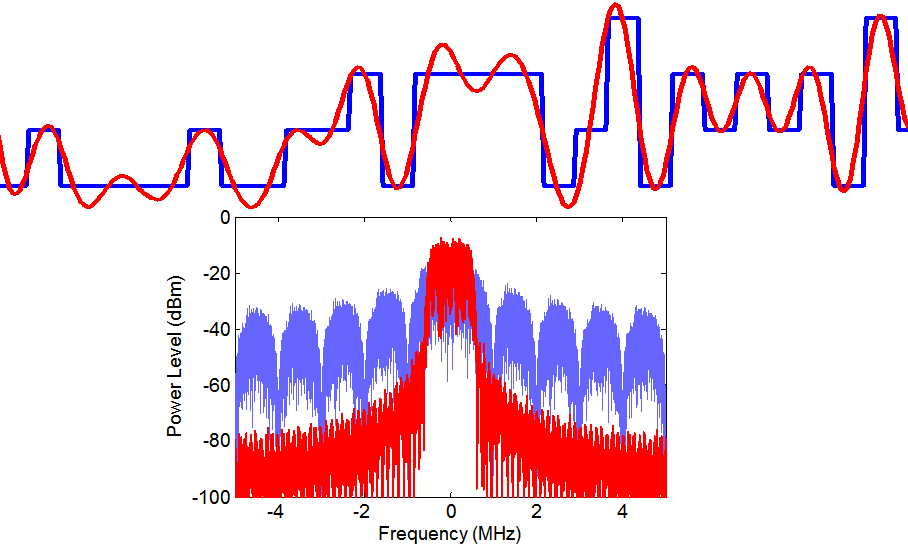 The unfiltered view is clear from observing the resultant modulated signal as a stream of impulses that are the convolved with a rectangular pulse that is the width of your symbol period. Again see the example related to QAM below, which equally applies to PSK. If the waveform was not pulse-shaped, the stream of impulses representing the modulation symbols would be convolved in time with a rectangular function of width $T$ (where $T$ is the symbol period) to result in the blue waveform above. Note for PSK this stream of impulses is complex values all with same magnitude by varying phase from symbol to symbol. The stream of impulses if indeed completely random and independent from symbol to symbol would have a white spectral density. Since the impulses are convolved with a rectangular function in time, its spectrum is multiplied by the Fourier transform in frequency, which for a rectangular function is a Sinc with a first null at $1/T$! Thus it should be very clear that the spectrum for a unfiltered PSK or QAM modulated waveform will be a Sinc function with a main lobe of twice the symbol rate. Pulse shaping reduces the bandwidth further. 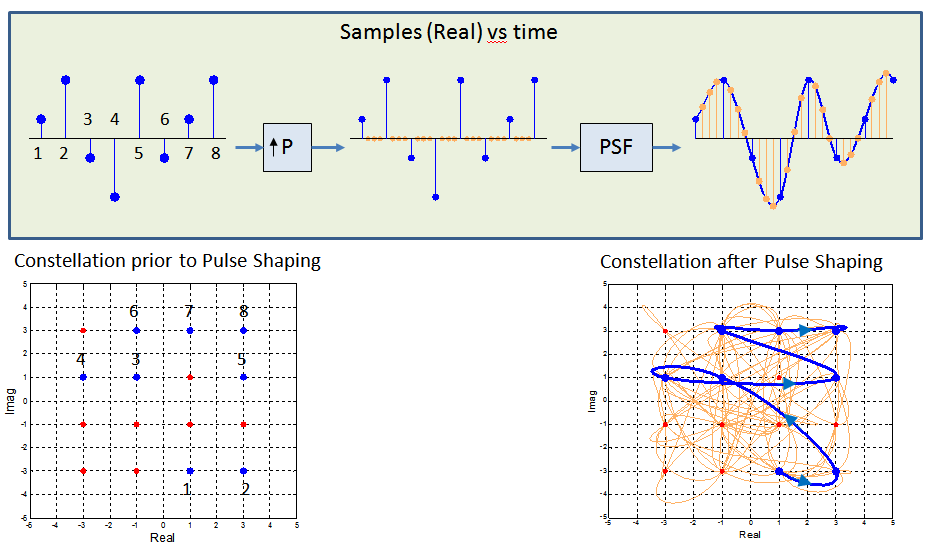 For an immediate insight into why the bandwidth can reduce to half the main lobe at most, consider a modulation case where the waveform alternates on every symbol between two symbols. The result would be a square wave at a rate of half the symbol rate. This would represent the highest frequency data pattern possible (such as for BPSK the data pattern of 101010 vs 11001100), and filtering down to half the main lobe would allow the fundamental of this square wave to still pass, as a sine wave yet still containing the information (101010) for subsequent demodulation. Filtering any lower than half the main lobe and this particular pattern (representing the highest frequency possible) would be completely removed.

when the signal is base-band it requires a Baud rate=Bit rate /3. To achieve this baud rate you need a minimum bandwidth of Baud rate/2 (As Nyquist) Lets call this minimum base-band bandwidth BWo.

When you try to modulate this signal, you will move its frecuency components to F-carrier and in this process you will need to double its original base-band BWo

Conclusion after modulation using PSK you will need: 2*BWo

0
How to calculate the FFT period
-1
Why does applying RRC to the signal increase bandwidth?

2
I/Q Sampling and Demodulation
1
Spectral Effeciency of BPSK
3
QPSK Data Rate vs Bandwidth at Passband: Why can it only transmit 1 bit per Hz and not 2 bits per Hz?
0
What is the difference between frame error rate (FER) and symbol error rate (SER)?
1
Relationship between signal rate, data rate, minimum bandwidth
0
Bandwidth and BER of FM0 encoding
2
Bandwidth of PSK modulated signal
0
Time domain representation of a modulated signal when symbol rate >> carrier frequency?