Let me start by saying that this question is motivated by data analysis that I am doing. It's part of a much larger set of signal processing operations, but in order to keep the question contained I'll ask a general question and hope, someone will be able to help me:

Is there any physical or mathematical characteristic that is known for a signal (containing only the odd Harmonics) whose FFT-imaginary and FFT-real parts have alternating signs ? 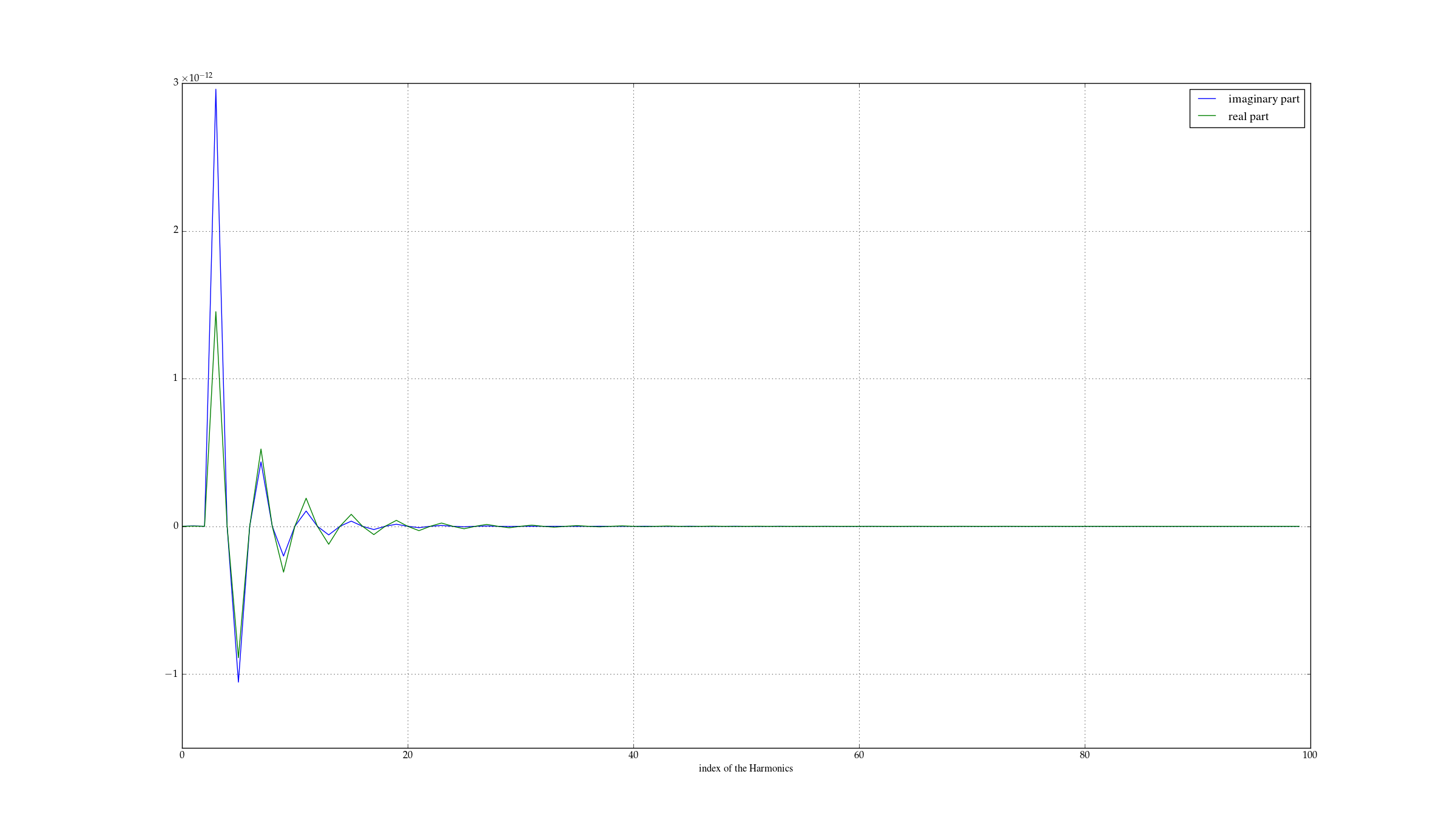 As a matter of fact, this alternation happens when I shifted my signal in the time domain. This signal is measured and contains many periods. As I don't know the phase shift between the excitation signal and the measured signal, I am not really sure where the correct signal begins because I don't have the real phase shift. So when I shifted the time signal with (3/4)*Number_of_bins_per_Period, I got a plausible time signal (that suits other operations I am doing on its basis). So I wanted to know if I can find the reason why this shift : (3/4)*Number_of_bins_per_Period, is the correct shift by analyzing its effect on the real and imaginary part of the signal. Before the shifting, the FFT of the signal has these real and imaginary part: 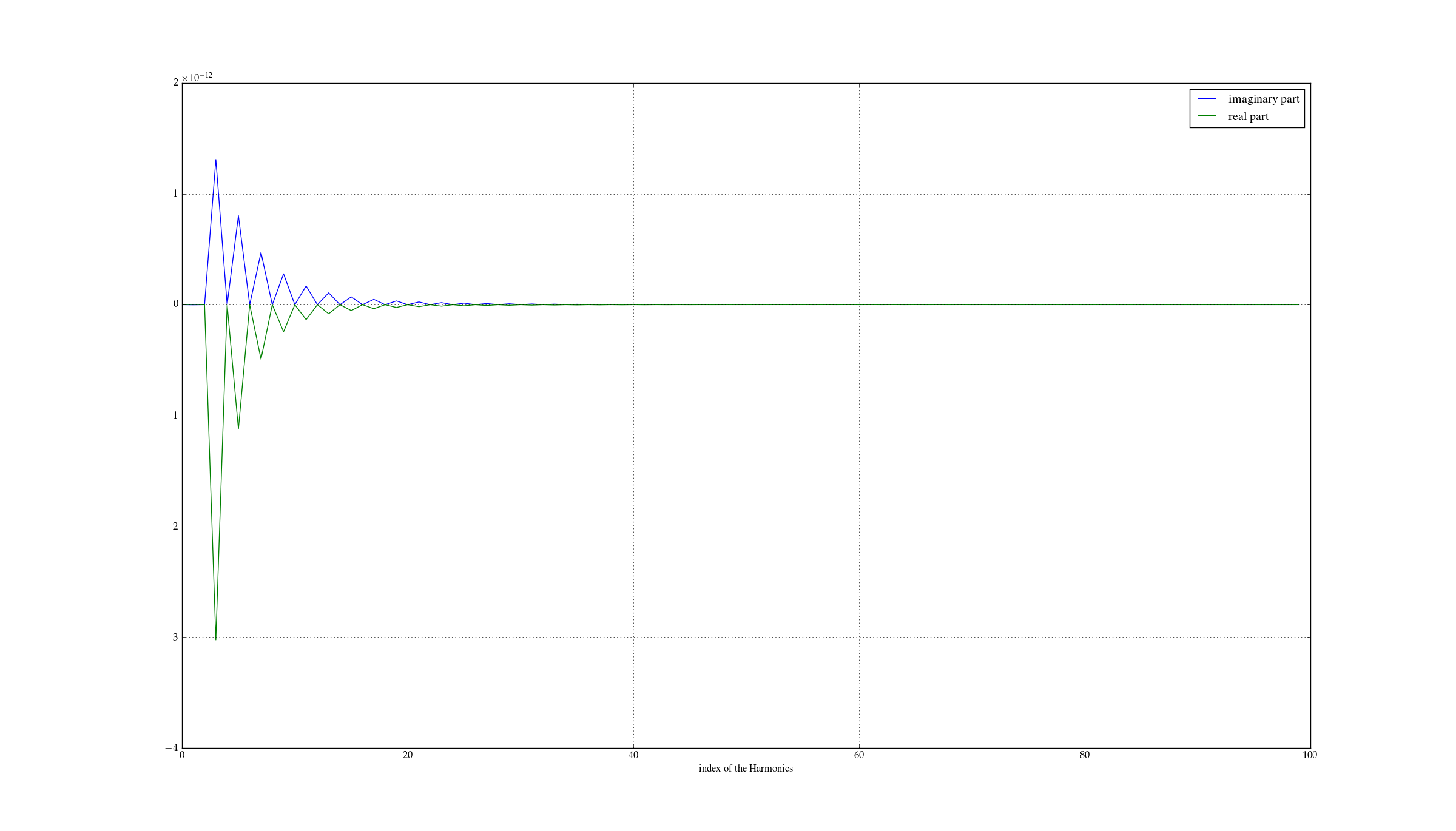 EDIT Please note that I am not asking about the fourier Transformation or why I am getting this behavior. This is clear. As I said, the shift I am doing (3 *Tr/4) I did it intuitively and it gave me afterwards the results I was looking for. I was hoping to find the answer, as WHY exactly this shift is the right one. And I thought maybe the hint would be the alternating signs. So why should be the sogns of the real and imaginary part alternating so that my shift is right . Is this a sort of finger-printing for a specific physical phenomena ?

This is exactly the expected result for a time delay: A delay in time is a linear phase in frequency; so you shifted the amount that would cause 180 degree phase shifts between your frequencies (Note that at your first frequency sample location you have a positive real and positive imaginary, which rotates to positive real and negative imaginary which is a -90° rotation, then follow the same process for your second frequency and you will see it is a +90° rotation; the phase change between the frequencies given is 180°). It is repeating at 180° due to the modulo property of phase, but you are really seeing the evidence of a linear increase in phase that is rotating past 180 degrees at each of your frequency samples where energy exists. 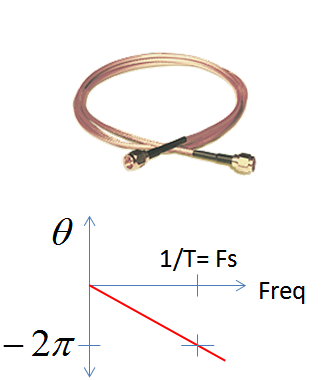 So in your case we are seeing the resulting rotation of 180 degrees for the same distance between your frequencies tones (evidence of a linearly increasing phase).

If you plotted each frequency as a complex vector on an I-Q (real vs imaginary) diagram, as you change the delay of your signal in time, you will see the vector rotate accordingly with no change in magnitude. The higher frequencies will rotate proportionally faster.

Here is another view in case that was not clear describing the same effect and very specific to your case. The top plot shows sine-waves in time for a first and third harmonic, and the delay at a fixed time offset such that the first harmonic has shifted -90° and the third harmonic as expected has shifted three times as much or -270°. 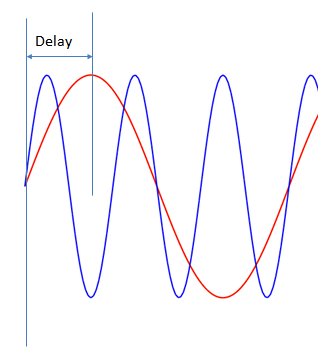 These last plots demonstrate your case exactly and shows the same thing on a complex plane which is consistent with your complex frequency outputs that have real and imaginary components. Note that I use the common notation I and Q for real and imaginary where "I" is "In Phase" and "Q" is "Quadrature Phase". 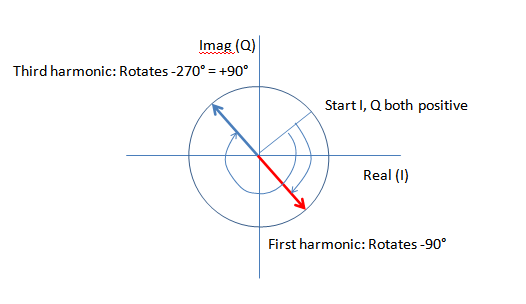 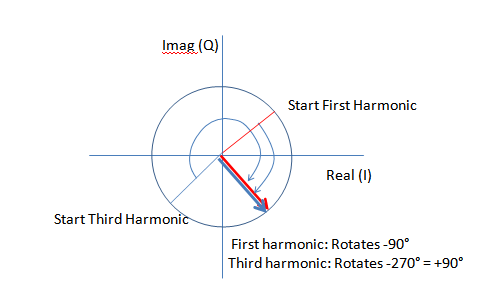 Note that applying a finite length FFT to a longer length arbitrary frequency sinusoid applies a rectangular window (e.g. cuts off the stuff before and after the finite FFT input vector) to that sinusoid. A rectangular window in the time domain is the same as convolution with a Sinc function in the frequency domain. Note that a Sinc function has alternating lobes (above and below zero). So if the frequency of a sinusoid is shifted off a bin center (e.g. is not integer periodic within the FFT width), the Sinc function's alternating lobes will be sampled by the FFT result, thus resulting in alternating signs in the real and imaginary components of the FFT result.

(For exactly integer periodic in aperture signals, the Sinc is sampled mostly at zero crossings, so becomes invisible in the FFT result.)

Not the answer you're looking for? Browse other questions tagged fft signal-analysis frequency-spectrum python or ask your own question.