derive an average waveform from an FFT spectrum, where all cycles have same shape and period

I measured a (real) voltage waveform (red curve below). Then I took its FFT and used the magnitudes of the first 20 harmonics (even and odd) to model the signal (blue trace below), by summing the fundamental and harmonic-related sine wave components as follows:

The model (blue) has symmetrical rising and falling edges, whereas the measured waveform (red) appears asymmetrical (capacitive charging/discharging; that is, the transitions begin sharply then decay). How does the FFT capture this effect if not in the harmonics? 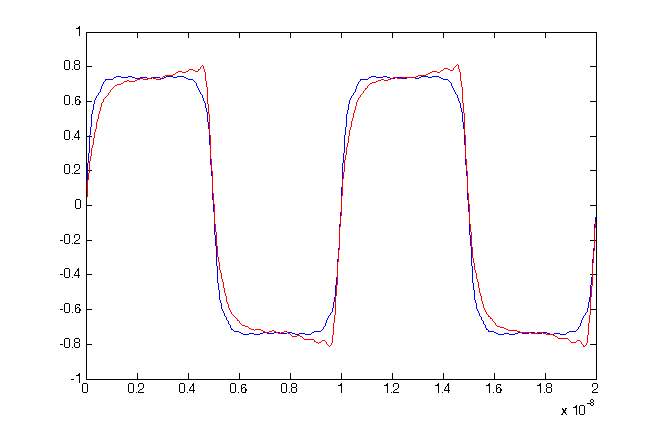 I modified the above equation to include the phase as follows:

where phiN is the phase for each harmonic computed from FFT coefficients between 0 and Nyquist frequencies (e.g. atan(imag/real)). 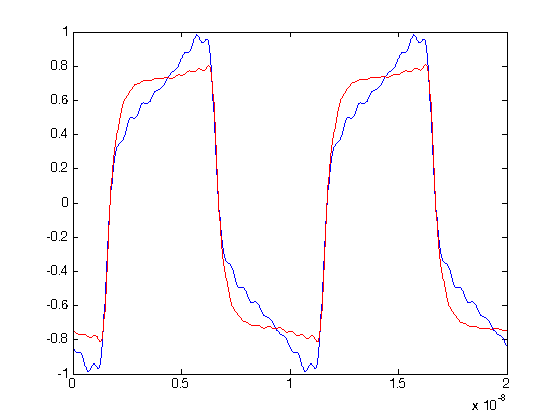 The model (blue) does show an improvement in addressing asymmetric rise and fall transitions, but I'm still missing something.

Is there a way to improve the model based on FFT coefficients as I'm trying to do here, without computing the IFFT explicitly? I'm trying to create a waveform where every cycle is exactly the same, with the same period (within machine error), which represents the waveform of an average cycle (repeated many times).

I found the answer here:

Just change atan() to atan2() to account for the correct phase in all quadrants.

Not the answer you're looking for? Browse other questions tagged fft discrete-signals fourier-transform frequency-spectrum dft or ask your own question.