Can anyone give me an example of two signals with different temporal waveforms having the same Fourier transform (FT)?

Would the inverse Fourier transform still be able to recover correctly each signal?

Actually, I tried to check the question above, in matlab, using two chirp signals (same duration), the first one having a frequency increasing from 10 to 50 Hz as time increases and the other one having a frequency decreasing from 50 to 10 Hz as time increases. The result was that the moduli of the FT were identical but not the phases (that were symmetric wrt frequency = 0) even with the addition of noise.

What surprised me is that the inverse FT was able to recover correctly both signals when I was expecting it to not be able to do it since we usually say that the FT makes it so that we lose the time localization.

I am aware that the time localization information is still contained in the phase part of the FT but if this is the case then what do we really need the time-frequency representations for? Is it just to easily extract this information since it's so hard doing it using the phase of the FT?

Any thoughts on that would be appreciated.

fourier-transform time-frequency
Share
Improve this question
asked May 24 '17 at 1:36

What a tricky question to overlook. Indeed I'm one of those who would immedieately press that Fourier transforms do lose time localization of the events as the comments stated. Yet it's certainly (mathematically and practically) true that any (transformable) signal waveform is exactly preserved under this reversible transform including all of its time distribution information as well. Your example of the reversed chirp case clearly demonstrates this. This needs an answer. At least to clarify why then there is the well accepted idea that FT do not preserve time localization of events?

Now, the idea that the Fourier transforms are losing time localization of the signals come from the observation that its bases are of infinite extent sinusoidals. And a sine wave of infinite extent and constant amplitude will not have a time localization. On the other hand it has a perfect frequency localization, being a pair of impulses at an exact frequency. The bases of wavelets, for example, are partly local in both domains.

A consequence of the fact that Fourier bases are of infininte extent is the following: Assume part of a signal contains a short duration high frequency spike, and the remaining parts are of quite still low frequency variations. When a Fourier decomposition or synthesis is used to analyse or construct such a signal, the high frequency spike (which is higly local in time) is to be created with high frequency sine bases that not only exist at the position of the spike but also exist along all the rest of the signal. Because those sines will extend from the beginning to the end of the whole signal duration. This creates the problem that local processing is quite inefficient with Fourier bases for transient signals. And transient signals have the prime importance in many mathematical, scientific and engineering fields.

Wavelets are kind of the optimal (probably in some sense?) transforms that provide a maximum amount of simultaneous time-frequency localizations (resolutions). And this is clearly apparent from the wave-packet (or the gaussian, or the maxican hat, or a shapeless daubechies...) shape of its bases. Wavelets therefore can provide an improved solution the problem associated with the previous paragraph.

A spectogram is partly providing similar information to a wavelet time-frequency analysis, and gives you frequency contents of the signal over its time duration.

Note that you can still go with Fourier analysis for transient cases as well but that requires what Peter K. referred to as a codswallop work...

Fourier transforms generally yield complex spectral data. Under some technical conditions, they are bijections. From the Fourier transform, you can uniquely recover one single signal. However, when looking at spectra, the situation is different: signals can have the same amplitude spectrum and very different phases, as in the example below: 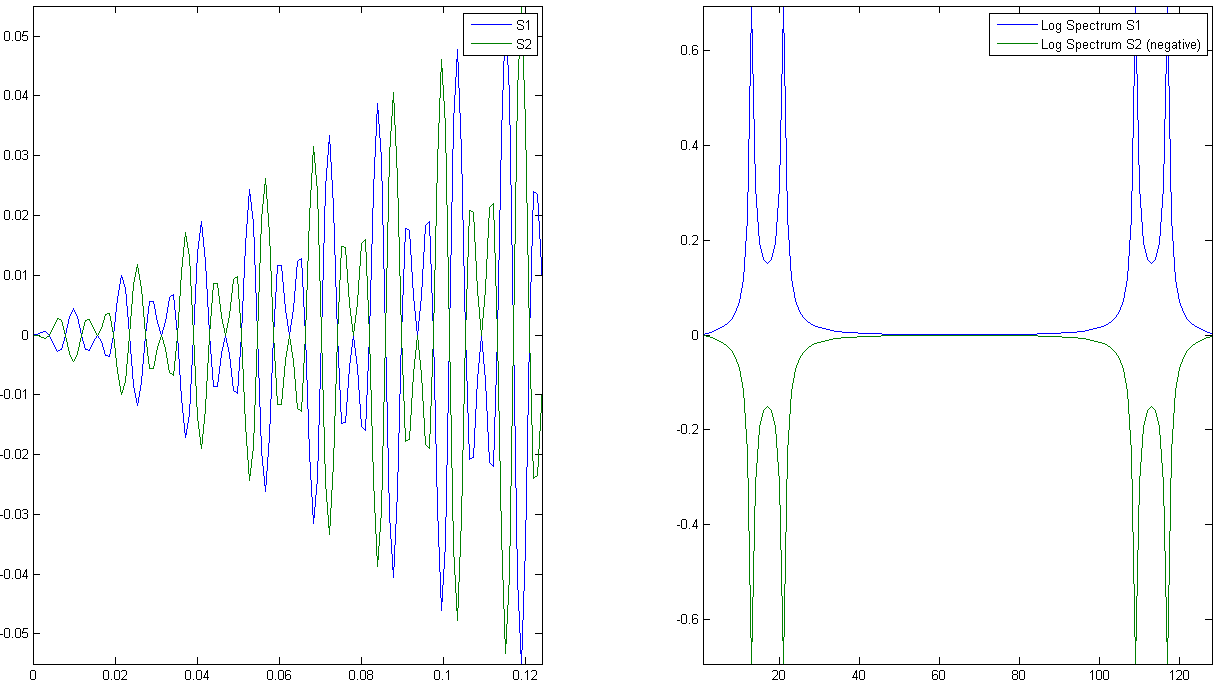 Being bijections, Fourier transforms don't lose time localization; however, amplitude spectra somehow do. One issue is that the phase encodes time or space localization in a way that it is not easy to read or decipher in general. One interpretation is that, for less stationary data, the phase can change very fast, and being known in $]-\pi,\pi]$, it looks like a truncated signal, difficult to unwrap. This can be seen especially for images. Below you have a row for Lenna, and one for the Cornouaille boat. 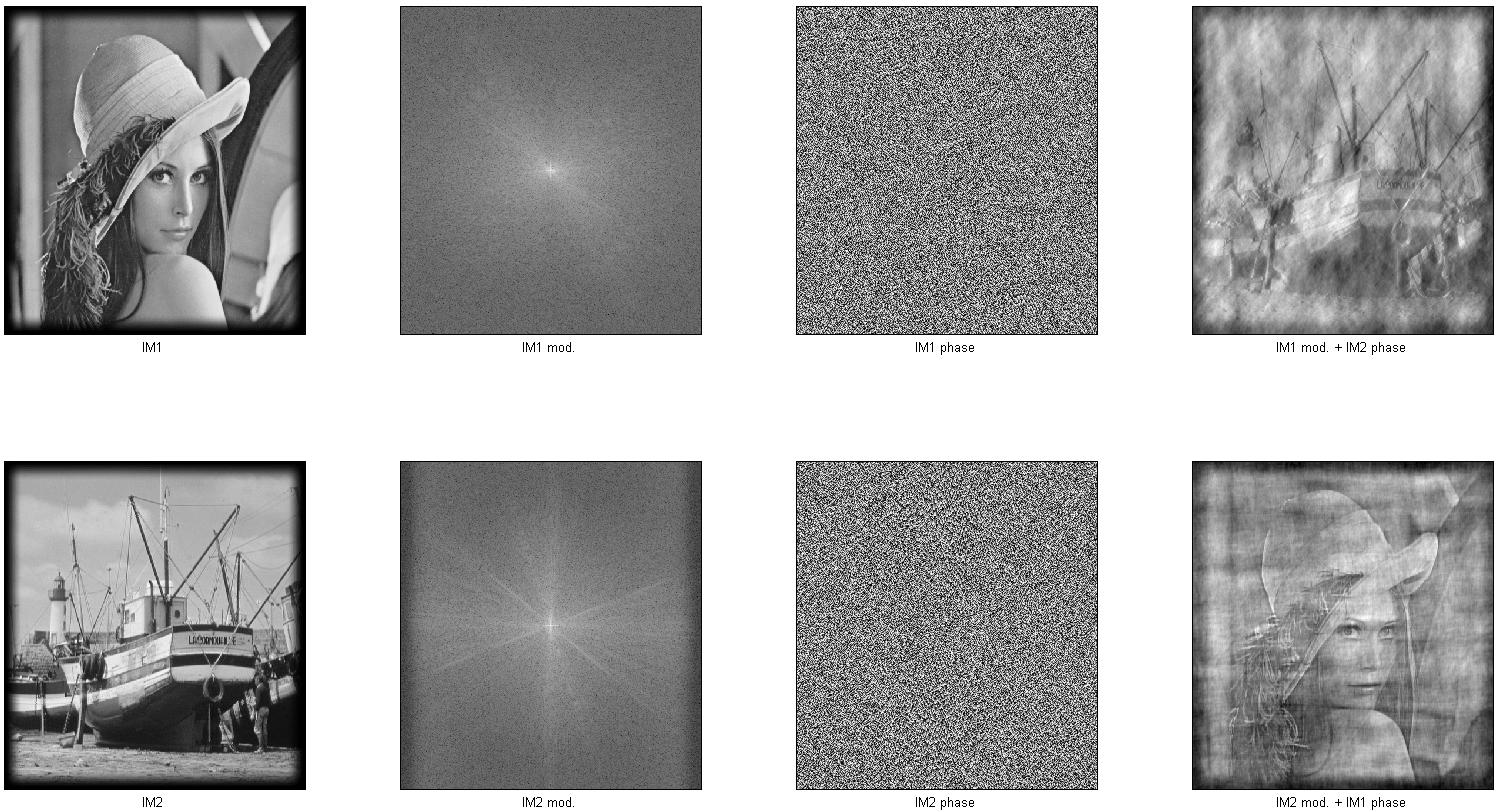 The second column is the amplitude spectrum. Shaky, but readable. The third column is the unwrapped phase. It seems to have not structure at all. However, it encodes most of the changes in the original image. You can test this by swapping moduli and phases: this is the fourth column. If you take the modulus of Lenna spectrum and the phase of the boat, and do an inverse Fourier transform, you get a ghostly boat, almost no trace of Lenna. You can see the converse on the bottom row. A phase component carries a lot of information, but it is not easy to make sense of it when it is not localized.

One way to localize spectra is to use a window $h$, and you easily get short-time Fourier transforms:

but if you consider $h$ as an infinite constant window, then $h^*(t-\tau) $ is constant, and you recover the standard Fourier transform:

But people are still trying to understand complex phase patterns, even with short-time Fourier. Windowing does not unveil everything.

[EDIT] Finding a best among time-frequency or time-scale representations is a difficult matter for several reasons (not exhaustive):

If the morphology of your data is diverse (like spikes + oscillations), you may having to try mastering different tools: frames, unions of bases, data transformations, etc.

Spectrogram or STFT-like Time-Frequency representations pre-window the data to pre-preserve some time locality information (in the window parameters) before all the frequency transforms converts (obscures/encrypts) time locality details into a hidden or much less intuitive form. In the case of wavelets, a form of windowing to pre-preserve time locality can be done within each transform basis vector, instead of to the signal or data before an FT.

Not the answer you're looking for? Browse other questions tagged fourier-transform time-frequency or ask your own question.

1
Need an Identity for CTFT Polynomial Raised to an Exponent
1
SVD is not applicable to time series analysis?
5
Is Gabor uncertainty a feature of the Fourier transform, or of nature?
2
Is sub-sampling delay estimation possible without interpolation?
2
Does the inverse Fourier transform only produce stationary time signals?
3
Confused on the difference between the frequency spectrum of an entire song, and the frequency spectrum of a point in time
2
Finite and Infinite support in time and frequency domain
0
Python tool for time-frequency analysis
14
Fourier transform is an isomorphism…but we don’t get when each frequency appears?
1
What mother wavelet should be chosen as an alternative to the STFT?