I need to ask about insertion of Zero Symbols after QAM modulation in a OFDM system. Such that the 4 QAM has a constellation with 4 corner and 1 center symbol indicating zero. What advantages or disadvantages woild that offer ?

Is this done for guard bits or as pilot or what ?

So I need to add more information to the question. I just had a tutorial on OFDM system on MATLAB and what my Tutor told was that in addition to the Cyclic Prefix, we may also include these zero symbols after we have modulated the bits with QAM. Which appear as Zero Points in Constellation. He was saying that they have the purpose of controlling the ISI as well. But I was confused because ISI was controlled by Cyclic Prefix. ?

Also I am not sure about what effects this would have on OFDM Spectrum.

As others have mentioned, it sounds like you are talking about the null carriers in an OFDM system: 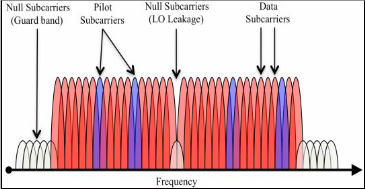 These bins are used to mitigate leakage from adjacent RF bands 2. Perhaps your tutor meant ISI in the sense that if adjacent RF bands were to spill into your OFDM signal, you would have some interference with your symbols on the edge of your bandwidth, but this is not ISI this is just, well, I (interference). The null carrier at zero is inserted because this carrier will experience significant interference in direct digital down conversion architectures (i.e. cannot recover modulated data when brought to DC at baseband).

In your case all the red/blue are QAM modulated data (if you use QAM for your pilot) the rest are left zero. The frequency spectrum would be exactly what you see in the figure above. It would be the same overall bandwidth, but with a fraction of the bandwidth used. It can be confusing because we use the term "guard band" when we mean frequency guard band which is different than what we mean by the cyclic prefix time domain "guard band" which mitigates the effects of ISI.

If an OFDM Tx (and consequently Rx), you have to be careful about what happens before the iFFT (FFT, respectively) and what happens after it. Before the iFFT, it is the frequency domain and after the iFFT, you are working in time domain. So I would count "in addition to the Cyclic Prefix, we may also include these zero symbols(as guard bands) after we have modulated the bits with QAM. Which appear as Zero Points in Constellation. He was saying that they have the purpose of controlling the ISI as well" as a bad explanation.

The bit to symbol conversion happens before the iFFT in frequency domain. It is here that the some symbols along the two sides of the sequence (and one in the middle) are just left as zero and not modulated. These are the two band edges in frequency domain and are left as null subcarriers to provide easy transition band to the analog filters in the frontend (e.g., Rx needs to have an anti-aliasing filter before sampling the signal). The basic rule in filter design is that the larger the transition bandwidth, the simpler it is to design the filter. If (most of) the null subcarriers were also used for transmission, then simple analog filters were not possible making the device more costly.

You are right about ISI. That is controlled by inserting cyclic prefix after the iFFT (time domain), not the null subcarriers.

Since each QAM symbol will be modulating a single subcarrier, adding zeros to your QAM sequence basically means adding a subcarrier which will be modulated by a zero symbol (unmodulated). If they are inserted at the edges (end or beginning of the sequence) they might serve as a frequency guard band.

They are however irrelevant for ISI. They do not have an effect on that. Adding a sequence of zeros to the output of the IFFT on the other hand, has the same effect of the cyclic prefix as it serves as a guard interval.

Not the answer you're looking for? Browse other questions tagged sdr constellation-diagram or ask your own question.