Some website says that its to avoid abrupt phase transitions through zero.. I cannot understand and figure it out the actual reason behind it.. Can anyone please point it to me

modulation qpsk
Share
Improve this question
edited May 20 '17 at 20:14

Let's look at each in turn:

With standard QPSK, each of the signal points are in quadrature (Note that the signal points in the constellation can be at any arbitrary phase really; either 0, 90, 180, 270 OR 45, 135, 225, 315...or any phase offset as long as the four constellation points are always in quadrature-- your interpretation of $\pi/4$ QPSK is actually not correct but I will clarify that later below). So to be QPSK each symbol is one of four states and they are in quadrature, and any state can transition to any of the other three on each symbol boundary.

The diagram below shows both the I and Q magnitudes versus time along with the same plot on the complex IQ plane as the constellation with state transitions. We can easily see from the constellation the state changes that would cause the signal to go through the origin. 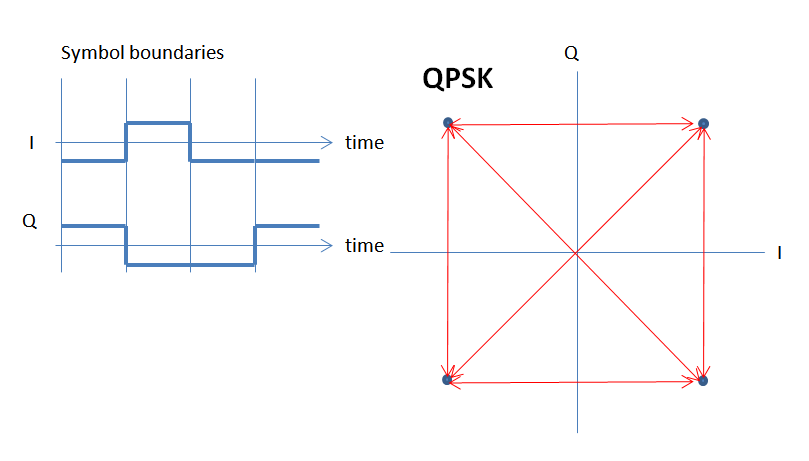 This following plot from this site image link is an actual QPSK constellation with the effect of pulse shaping which controls the transition from one state to another (see more details on pulse shaping at bottom of this post). Observe the similarity to the simplified state transition plot shown above. 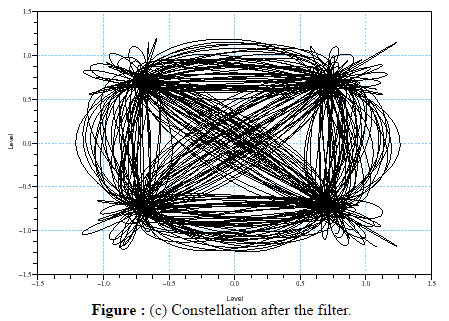 In offset QPSK, we completely eliminate the possibility of the signal going through the origin by shifting Q half a symbol relative to I. Since each symbol represents 2 bits, we are shifting 1 bit in the process. 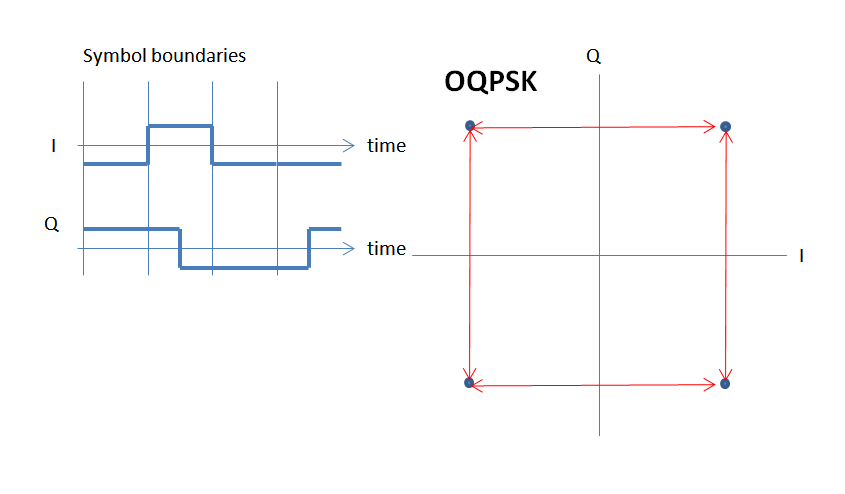 In $\pi/4$ QPSK we achieve the same objective (avoid the origin!) by rotating every other symbol by 45°. Note in the transitions from any one symbol to the next, as shown in the diagram below, that it is not possible to go through the origin. 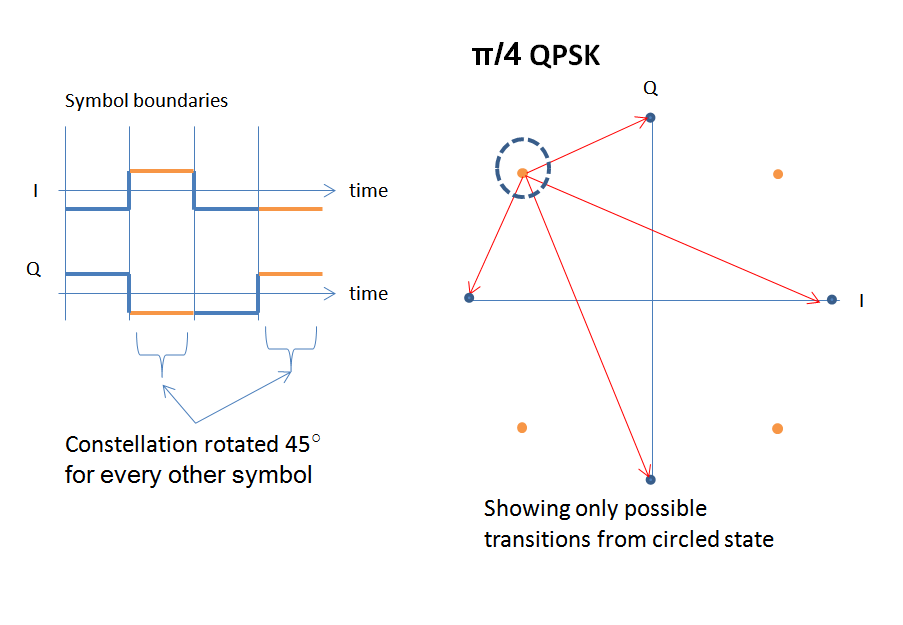 Below shows the resulting constellation from any state to any other state and we again see that the origin is never passed through. 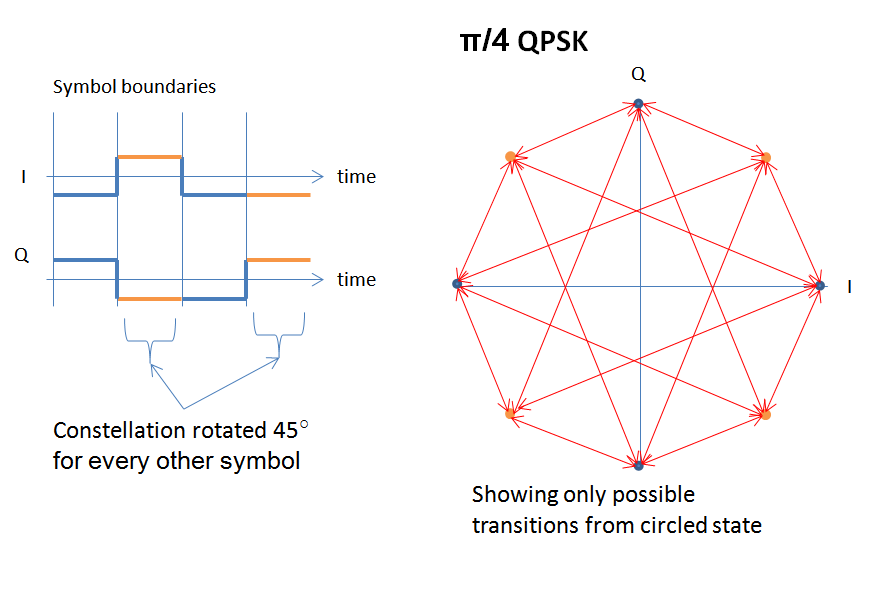 Why do we care?

When the signal is band-limited (as is nearly always the case), the envelope of the signal, and notably it's amplitude, will follow the trajectory more slowly in time as it transitions from one state to another. We implement pulse shaping to limit the bandwidth as depicted in the figure below: the upper portion of the plot shows a blue trajectory that is similar to the I and Q versus time plots above in that it is rectangular in shape, while the red shows the same trajectories after pulse shaping. Immediately below that is the corresponding spectrums also in blue and red - notice the significant reduction in occupied bandwidth! (Note that these trajectories shown in this plot are for the I or Q of a QAM waveform, hence the multiple levels versus time, but the point is to show the comparison and effect of the sharp or instantaenous transitions versus the slower transitions with pulse shaping.) 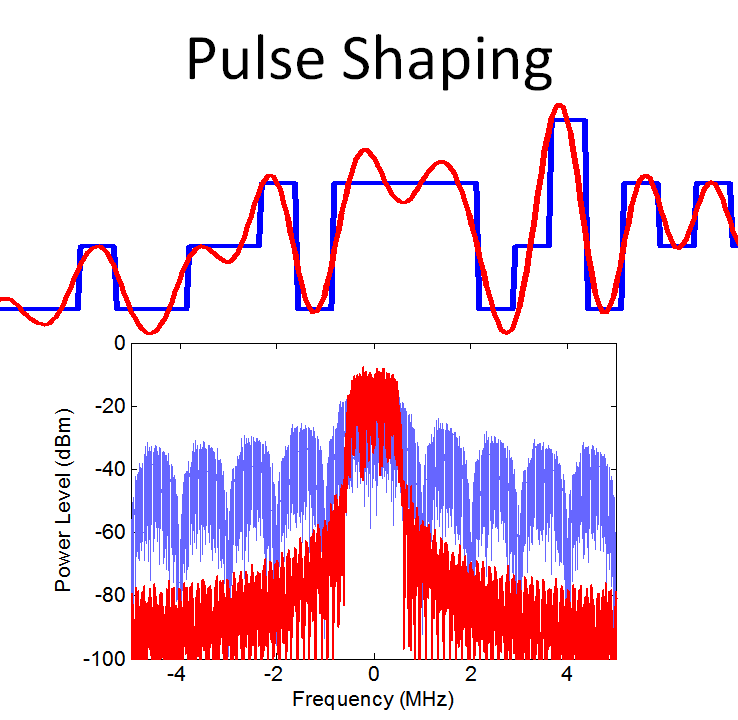 In the transmitter the modulated signal will be passed through a power amplifier, which uses a significant portion of the DC power budget for the device. With handheld mobile devices, power efficiency is a significant concern for long battery life. If we drive a power amplifier into saturation it will run much more efficiently (more transmit power vs DC power needed), but this will eliminate all the careful pulse shaping we did! The effect of the PA saturation is appropriately called "spectral regrowth". At an extreme case, consider the careful processing to implement pulse shaping on QPSK to restrict our transmitted spectrum by converting rectangular pulsed waveforms to slower transitions, then put it through a saturated power amplifier that acts as a hard limiter (in the extreme case) which serves to convert our slow transitions back to a rectangular waveform; and in the process "regrow" the transmitted spectrum back to a Sinc function. For this reason, when power efficiency is a primary concern, we are interested in either using constant-envelope modulations (such as GMSK and other CPM modulations), or waveforms with reduced peak to average power such as OQPSK and $\pi/4$ QPSK. A waveform that transitions (slowly) through the origin would have the worst peak to average power (the envelope and therefore instantaneous power goes to 0!), and OQPSK and $\pi/4$ QPSK significantly reduce this by reducing the total variation in the envelope of the waveform. Further, notice the expanded amplitude range in the continuous time domain waveform due to the pulse shaping in the plots above; the tighter we constrain the bandwidth through pulse shaping, the more overshoot we get which serves to increase the peak-average power in the waveform further restricting our transmit power for a given amplifier (this is a consideration as to how much we can restrict the bandwidth and presents a trade-space). Besides spectral regrowth specifically, power amplifiers when driven toward saturation (and at saturation run more efficiently: more transmit power for a given DC power provided to the amplifier) create AM/AM and AM/PM conversion. This specifically is distortion mechanisms from AM (Amplitude Modulation) in the signal. AM/AM is amplitude distortion due to changes in the signal amplitude (AM), and AM/PM is phase distortion (PM) due to changes in the signal amplitude (AM). By reducing the overall AM content (which is what OQPSK and $\pi/4$ QPSK do!) we can therefore drive power amplifiers further into saturation before the non-linearity effects are not acceptable.

Note too that if the QPSK waveform was not filtered, it IS a constant envelope modulation and none of this would apply as we could simply transmit using a hard saturated (highly efficient) power amplifier and not have any concern for pulse-shaping. The transition diagram shown above for QPSK would transition instantly from one state to another and therefore would go through the origin but in zero time, so there would be no AM modulation to speak of. However the obvious problem is the spectrum would appear as in the blue spectrum in the plot above, which for over the air broadcasts is not acceptable due to regulatory restrictions requiring efficient use of spectrum.

The main purpose of OQPSK, $\pi/4$-QPSK and other variants is to prevent the signal frequently transition through zero. When a digitally modulated signal stream input to a power amplifier passes from one symbol -- through zero -- towards another symbol, it is like turning it off and on, again and again. The consequence of switching the input to any device on and off at a very fast rate is spectral regrowth, in this case at the amplifier output.

Why not use a constant envelope modulation like Minimum Shift Keying (MSK) and the likes? Because QPSK has a better spectral efficiency (more b/s/Hz), hence the search for QPSK variants with better transition behaviour.

Not the answer you're looking for? Browse other questions tagged modulation qpsk or ask your own question.

2
Use of pulse shaping in digital modulation