I have a stream of audio blocks at input, each having 64 samples.

What's the frequency response of this filter?
Is there a use case for such design, or does this make no sense?

Yes this would properly delay the input by 64 samples but note that you can simply do:

Which was probably clear to you and you just wanted to show how it related to a 65 tap FIR with all taps = 0 except the last one.

The coefficients of the FIR filter represent the impulse response (strictly in discrete terms we call this the "unit sample response") of the filter. In this case the impulse response is a delayed impulse. The Fourier transform of a delayed (time shifted) impulse has a magnitude response in frequency that is all ones, and a linear phase response where the delay is equal to the phase slope according to:

$\text{delay} = d\phi /d\omega$ where $\phi$ is the phase in radians and $\omega$ is the radian frequency in radians/second.

We see this specifically from the Time Shift property of the Discrete-Time-Fourier-Transform:

You can quickly plot the frequency response using Octave or Matlab as follows:

With the following result: 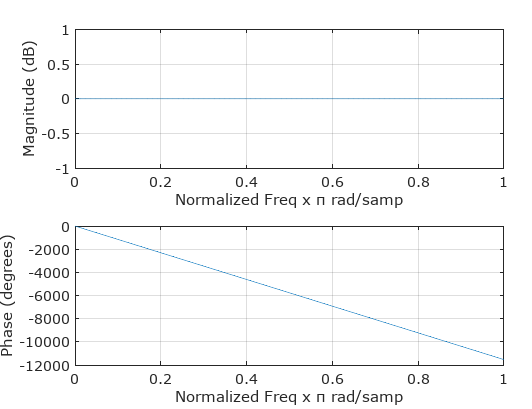 With a linear phase filter such as this, the signal is not distorted by the filter, only delayed. For more on that see this post: why is linear phase important

Not the answer you're looking for? Browse other questions tagged filters audio finite-impulse-response or ask your own question.

28
Why is a linear phase important?

0
FIR / IIR and Wavelets
3
How to test the FIR filter in C++?
2
FIR filter design and implementation - sample rate and number of taps
0
Do filters work on a "per sample basis"?
0
FIR Filters and moving average filter
0
Arbitrary Phase FIR design using FFT
3
How to understand the filter coefficients in FIR filter
0
Conceptually confused by LPC for speech: Do we synthesize by the inverse filter (FIR)?
2
Designing FIR filter for real-time decimation of audio on embedded system
0
Convolving a LP FIR filter with a HP FIR filter