What does correcting IQ do?

Some software (for example SDR Sharp) has a "Correct IQ" option. This is used to get rid of the DC spike in the middle of the display. What does this setting do to the signal? What is wrong with the IQ values that needs to be corrected?

Here are some graphics I have to add to the other good answers, as well as typical correction schemes for DC Offset and IQ Imbalance.

Below is an example DC Offset on a 16 QAM signal (with some added AWGN). In this example the offset if shifted by an amount such that the power in the fixed vector representing the shift is 10 dB below the total power in the signal. Notice that the shift can be at any magnitude and phase and the fact that it does not change with time makes it "DC". Also notice that even though it is 10 dB BELOW the total power in the signal, it appears significantly higher in the spectrum plot which may confuse some observers: this is because the waveform's power is spread over the modulation bandwidth, so the power in each FFT bin is lower than the power in the DC offset. 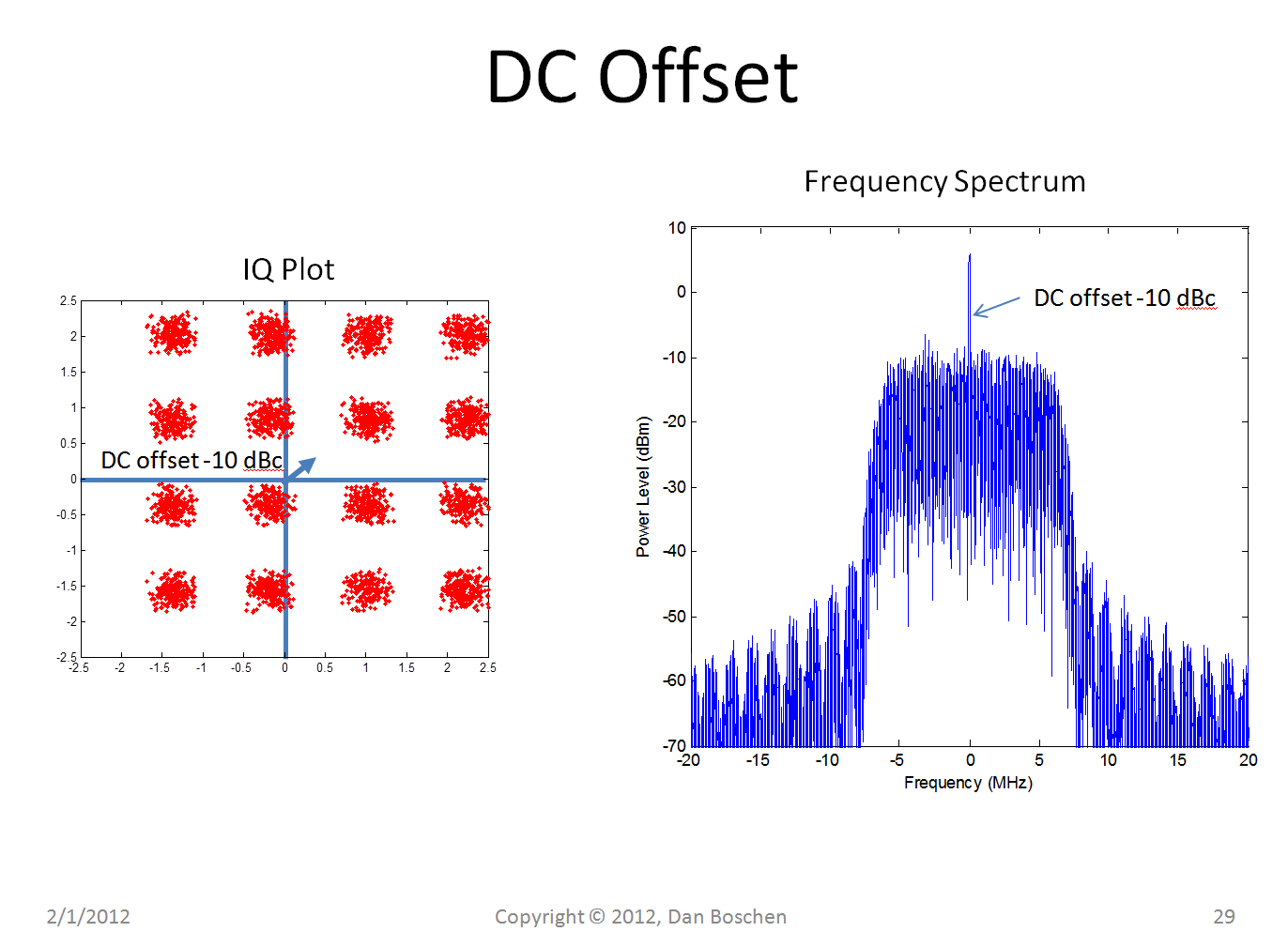 Below is a simple approach for eliminating DC offset. This filter is also introduced in this post: Transfer function of second order notch filter, where the gain constant $\alpha$ controls the bandwidth, getting tighter as $\alpha$ approaches 1. 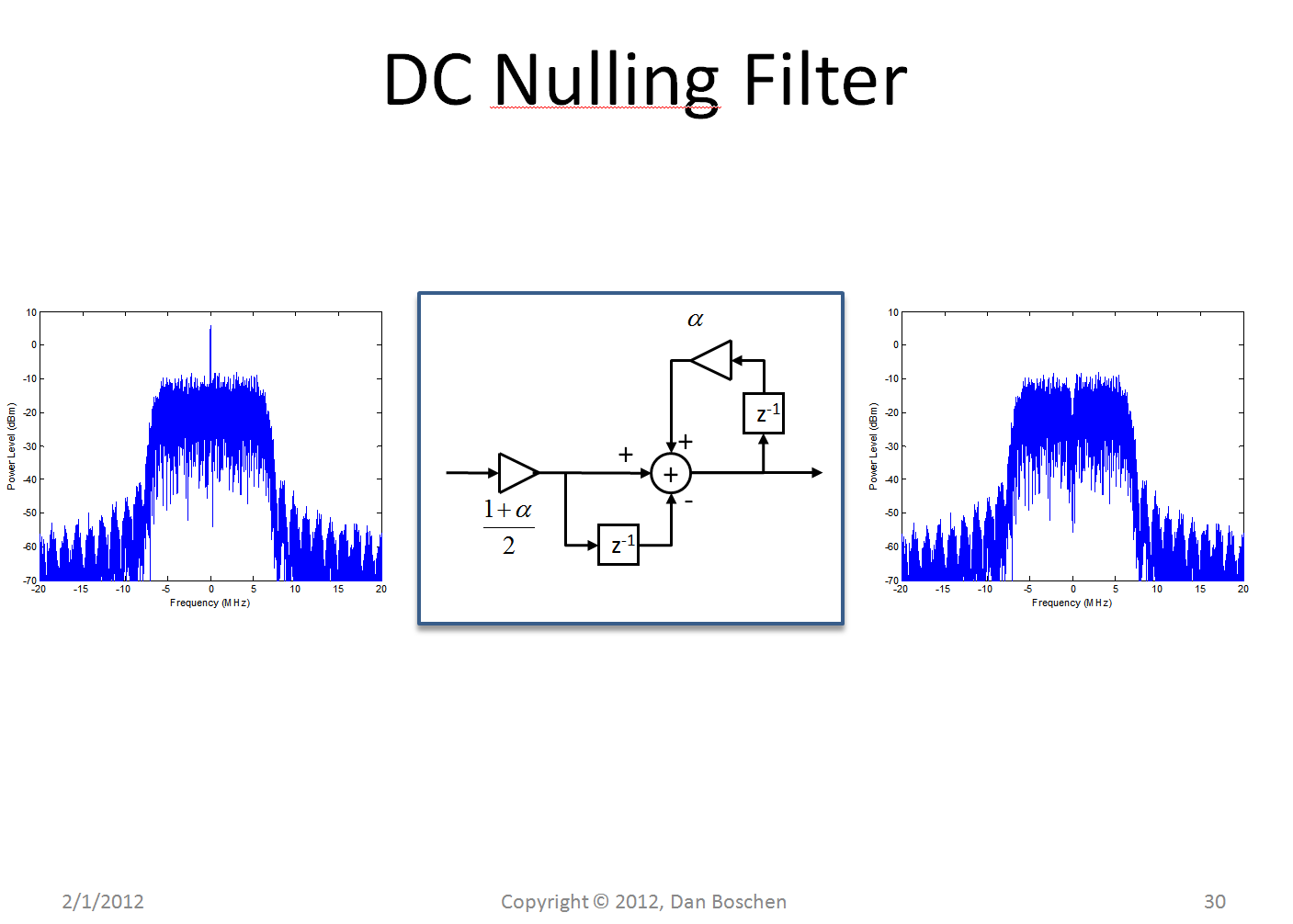 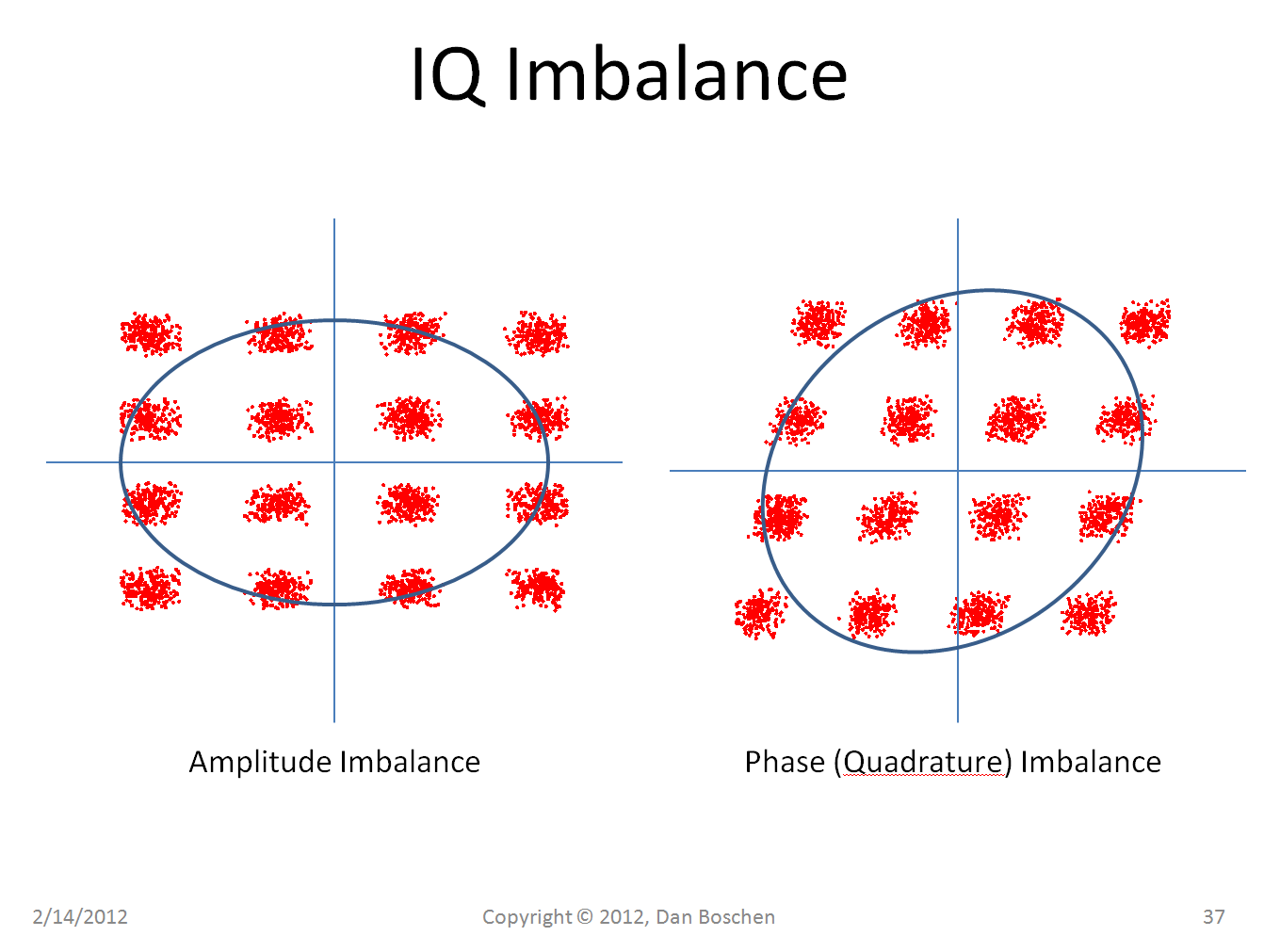 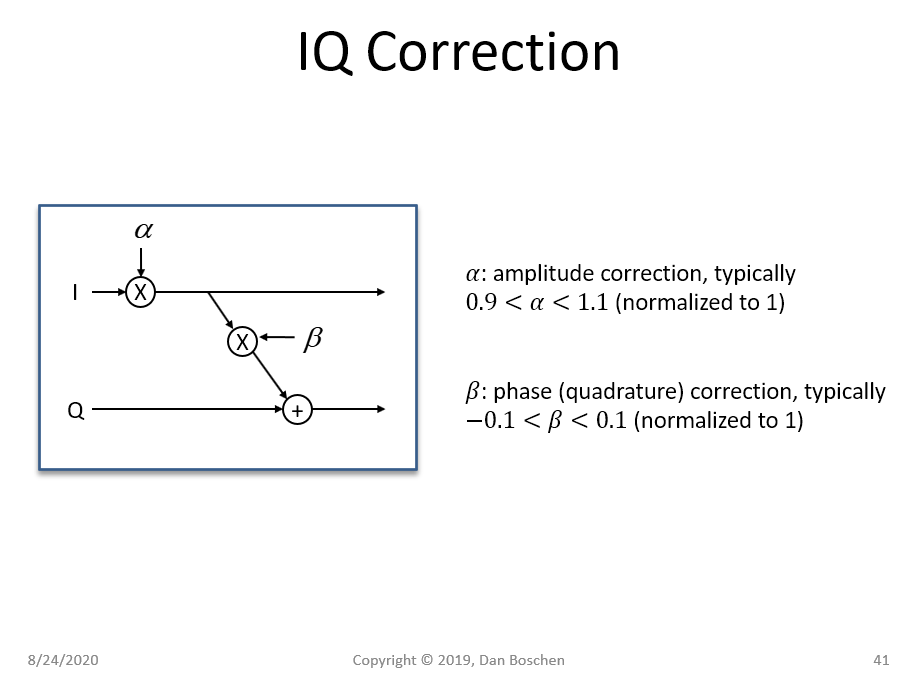 Mistake: The beta multiply should be placed on the Q-path

Real RF devices are not ideal as in a simulation or theoretic calculation. In particular, RF devices produce (among others) the following effects:

The correct IQ option is there to estimate these effects and remove them via digital or analog signal processing.

For a balanced IQ signal, we obtain $$x_I(t) = x(t) \cos(2 \pi f_c t)$$ and $$x_Q(t) = x(t) \sin(2 \pi f_c t).$$ When this is true, the two carrier waves are orthogonal to each other and carry orthogonal (independent) signal information. When these are imbalanced, the orthogonality is lost so the components become correlated.

To put this on solid ground, let us consider an example.

As an example of the difference from the ideal case, consider what would happen if we filtered out the high frequency components in both cases, we obtain a difference in amplitude for the imbalanced case. This difference depends on both the amplitude difference ratio ($A$) and the quadrature phase difference ($\phi$) of our two carrier waves. Correcting for IQ imbalance, means performing a digital operation (a linear combination of the I and Q channels) to restore the orthogonality of the I and Q signals. This is usually done in the digital domain after a characterization of the I and Q imperfections have been made.

A potential downside to this processing is that the noise may be amplified in the Q channel. For typical values of $A$ close to unity and $\phi$ close to zero, this noise amplification is negligible.

Not the answer you're looking for? Browse other questions tagged sdr or ask your own question.

9
Large spike at the center frequency when using Ettus X310
0
How to get coordinates of complex RTL-SDR signal?
2
Recovering data from mystery signal
3
Getting the bitstream of an unknown RF signal
0
Equalisation of FFT spectra
1
SDR and amplitude modulated signals